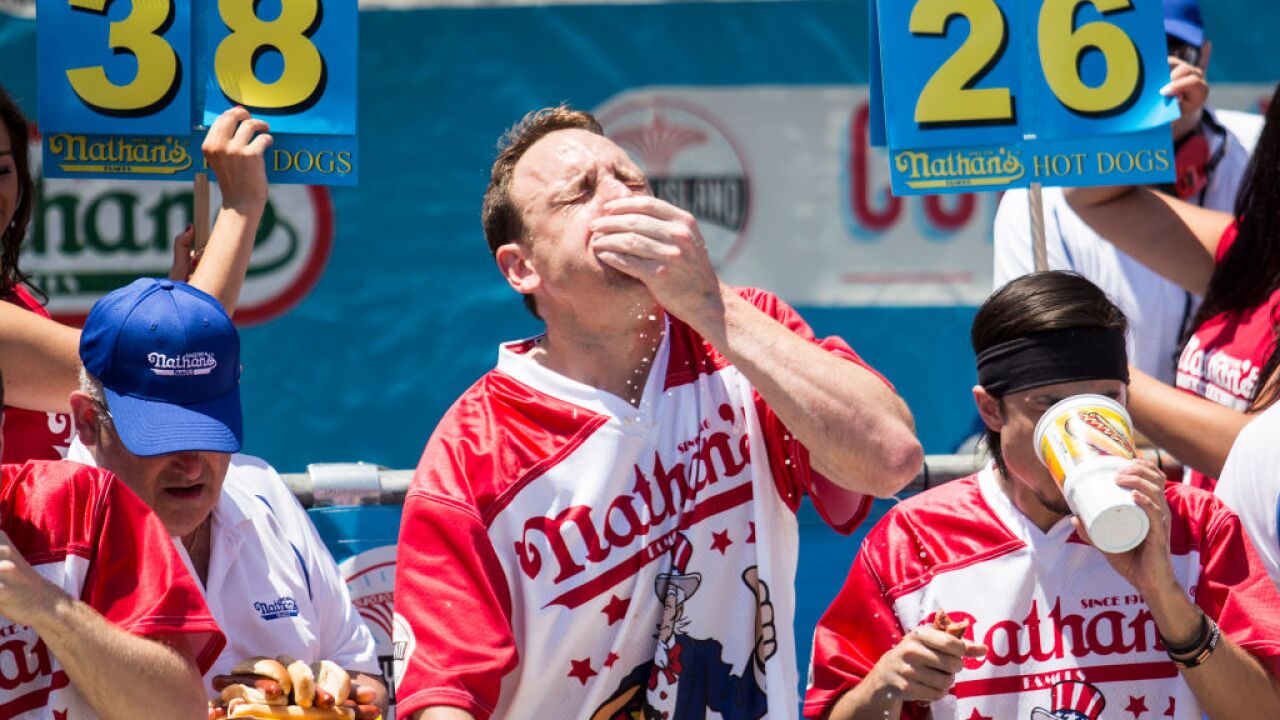 Welcome to America, where we celebrate victory over tyranny by cramming piles of processed meatstuffs into our strained, quenchless mouth holes!

There is no better celebration of freedom — specifically the freedom to do gross stuff with food — than Nathan's Hot Dog Eating Contest. The yearly smorgasbord held in Coney Island New York is arguably the most famous eating contest in the world, and every year professionals and amateurs alike pull up a seat in hopes of being crowned the Person Who Can Eat The Most Without Horking It Back Up (seriously, that's against the rules).

Professional eaters will tell you there is an art and a science behind the excess, but to the untrained eye the whole thing looks like someone threw a steak into an alligator pond. However, when you observe the performances of eating champions like Joey Chestnut and Takeru Kobayashi, a few clear tactics emerge. See which ones you can spot at this year's frankfurter festivities.

The dunk and shove

Apparently if you want to win an eating contest, everything needs to be as wet as possible. An esophagus will only accommodate so many dry hot dog buns before it starts restricting access, so real champions dunk their prey in buckets of water. Nearly all serious professional eaters do this, and with such gusto that the food arrives at their waiting mouths nearly pre-chewed, like the regurgitated offerings of a mother bird. Forget the flavor or structural integrity of whatever you're eating, this is about VOLUME. Look at Joey Chestnut, 11-time Nathan's Hot Dog Eating Champion. It looks like he's eating a water ballon.

The divide and conquer

A hot dog IN a bun? That's for normies. For maximum aerodynamics and aforementioned wetness, it's best to scarf one and then the other. The typical routine is this: Hoover dog, dunk bread, eat bread. Repeat 60 some-odd times. Notice how 2018 Women's Competition winner Miki Sudo incorporates a little rolling action in her bread to compress the overall bite volume. She ended up blowing away the competition with 37 devoured dogs in total. That's the strategy of a champion.

While the dunk and divide strategies are proven winners, each competitive eater has their own little flourishes. Check out pro eating legend Takeru Kobayashi breaking his whole dog in two before knocking it back. Kobayashi was actually the unofficial creator of this tactic, called the Solomon method. Get it, like King Solomon? Who doesn't love a little didactic infanticide with their hot dog binge? It doesn't seem to be a favored strategy for the Nathan's competition, but it's nifty to see on occasion, like an eephus pitch or a fake punt.

The Nathan's Hot Dog Eating Contest is 10 minutes long. By the time that clock starts running out, the struggle bus is at full speed. Some people have tapped out and others are trying not to barf in their water bucket, but the serious eaters are often bouncing around, Thriller-in-Manila-style. There are actually names for the different kinds of dances people do: Here, three-time Women's Champion Sonya Thomas does the "Carlene Pop," when people jump up and down. Then there's the "Buns and Roses," when people sway side to side. What about the "Oh God, What Have I Done?"

To drink or not to drink? Remember, the hot dog is already being delivered to the mouth in a semi-suspension of bucket water, so taking extra gulps may seem like a time killer. Not to mention, these people are already taxing their stomachs with several points of meat and bread, so a lot of competitive eaters shy away from taking in excess liquid. Yes, it's a very hot topic in the food challenge community! But take a look at 2015's surprise winner Matt Stonie. This man clearly favors intentional water breaks. This is an athletic competition! It's important to stay hydrated.