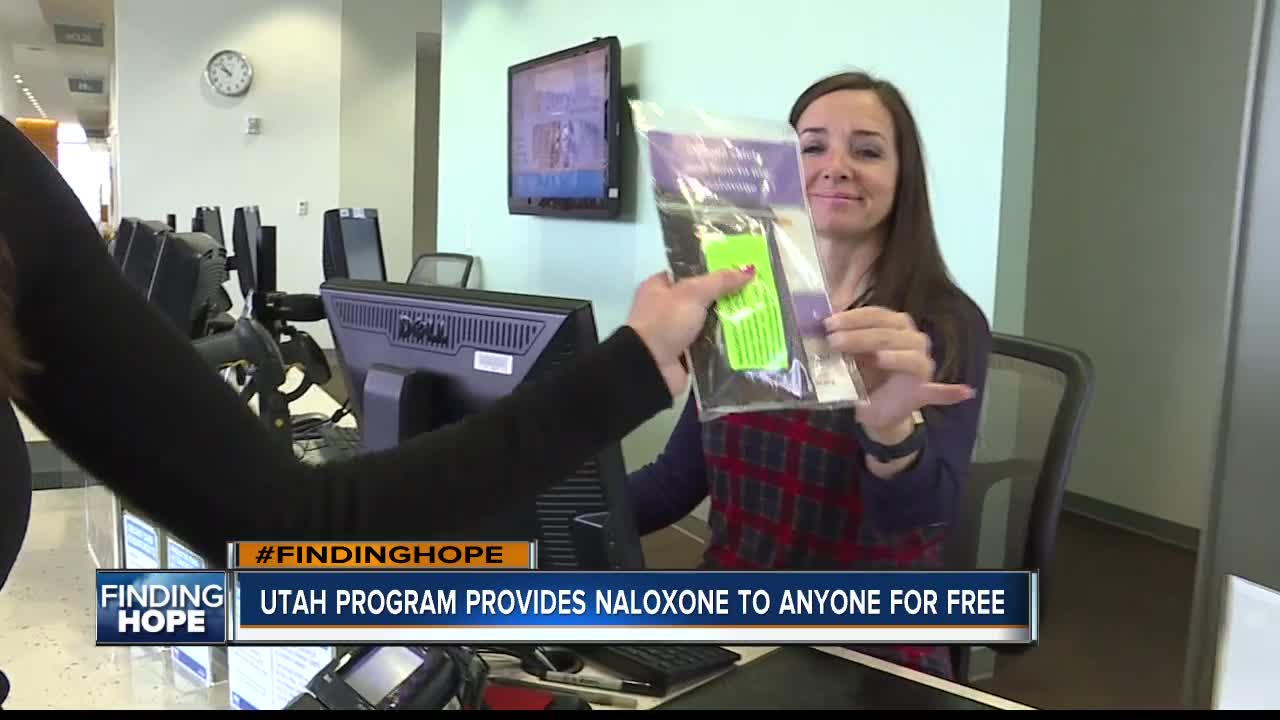 Through a partnership with Utah Naloxone, anyone can walk into a Salt Lake County public library and leave with Naloxone--free of charge, no questions asked.

SALT LAKE CITY, Utah — Roughly 130 people die from opioid overdoses every day in the United States, but an organization in Utah is working hard to ensure anyone who wants the overdose reversal drug, Naloxone, can access it.

If you wanted to get Naloxone in the state of Idaho, you'd have to get it straight from the hands of a healthcare professional, like at a doctor's office or a pharmacy, but Utah law allows any individual to dispense the drug on behalf of an overdose outreach provider.

Through a partnership with Utah Naloxone, that applies to Salt Lake County librarians. That means anyone can walk into a Salt Lake County public library and leave with Naloxone--free of charge, no questions asked.

Before you even step foot inside one of their 18 branches, you're reading displays and signs educating the public about opioids and addiction.

"We want the community to know we want them alive and well," Liz Sollis with the Salt Lake County Library said.

The library system started by equipping staff with knowledge about addiction and training librarians to assure they could jump into action in the case of an overdose at the library. But in a state that ranks among the highest overdose deaths in the country, there was a need for increasing public access to Naloxone, the opioid overdose reversal drug.

Since the library partnership with Utah Naloxone that started in the summer of 2018, librarians in Salt Lake County have given out more than 1,300 Naloxone Rescue kits.

"We see grandparents. We see moms. We see friends of someone who may be struggling," Sollis said. "We see a spouse whose partner has maybe just had surgery and they just want to make sure that while they're recovering, nothing bad happens."

Sollis says even teenagers have taken advantage of the program.

"We have had kids come in whose parents, unfortunately, have Substance Use Disorder and those kids have witnessed enough to know that need to have a Naloxone Rescue Kit for their parents," Sollis said.

The organization was the brainchild of Dr. Jennifer Plumb, who along with her brother, founded Utah Naloxone, inspired by the heroin overdose death of their brother.

"We have way too many opioids out there," Dr. Plumb said. "In the state of Utah, we fill 7,000 prescriptions for opioids every single day. We've got a lot of kids and guess what that means? Kids find this stuff."

As an ER doctor at a Children's Hospital, she's seen the importance of having Naloxone nearby firsthand.

"One night I had four kids, all under four, who overdosed on opioids," Dr. Plumb said. In each case, the child found pills that belonged to a family member and ingested them.

Since Utah Naloxone's start in 2015, they've distributed roughly 45,000 Naloxone kits equaling 90,000 potentially lifesaving doses. They've had more than 2,700 occasions where individuals have contacted the organization to let them know they used a kit and it helped save a life.