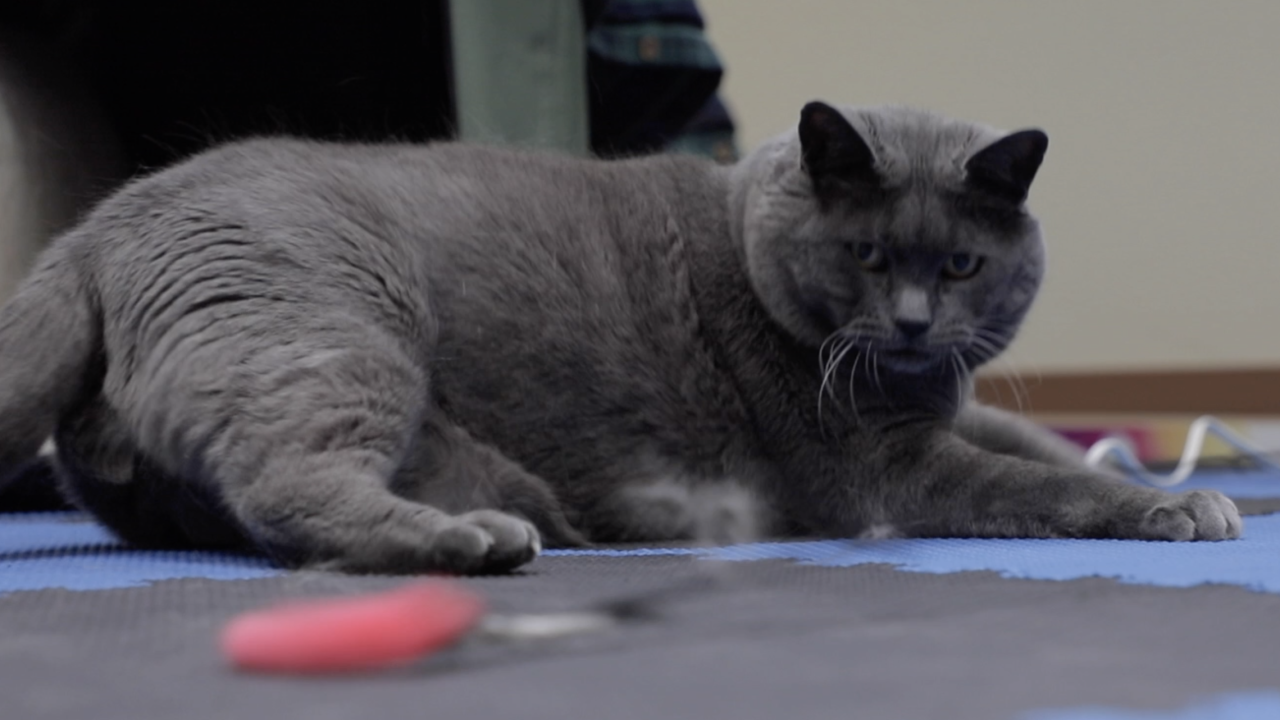 This cat has a weight problem.

“She’s uncomfortable, she has to lay down,” said Brita Kiffney, the cat's vet at Northshore Veterinary Hospital.

“She plays of five, ten minutes if you’re in a good spot and then she’s like, I gotta, I gotta lay down,” said Jason Collins, a vet tech at Northshore.

She weighs almost twice as much as a healthy cat should. And it's made her famous.

This is Cinderblock. And a few months ago she went viral for something a lot of humans can relate to - refusing to exercise.

“I think it’s gone straight to her head. I mean, honestly, she demands like five times more brushing than she used to. It’s wild,” said Jason.

He had no idea it would go viral.

The video now has over 3.2 million views.

A fat cat might be fun to cuddle, but the reality is being overweight is hard for animals. Brita Kiffney, Cinder's vet, knows that all too well.

It can lead to a lot of issues, just like it does for humans.

“Upwards of 60% of cats and 56% of dogs are considered to be overweight or obese. So I would say that yeah, that’s becoming a bit of an issue,” said Andrea Clewley. She is in charge of training at Trupanion, a company that provides medical coverage for hundreds of thousands of pets across the country. She says weight gain can really sneak up on pet owners.

“You may not notice the incremental increase in weight gain and so it may just be a really slow progression over time that you just don’t notice until all of a sudden you may look down one day and you’re like, holy cow, how did that happen?” said Clewley

And just like humans, it’s easier to pack on the pounds than lose them.

“It’s going to take her a year or more to reach her goal weight,” said Jan Province. She knows it's going to take a while. She works at the reception desk at Northshore Veterinary Hospital. Province and Cinderblock will be roommates once the feline is back down to her fighting weight.

Until then, Province will have to read Cinderblock the fan mail she receives at the hospital.

“Dear Cinder, we love you and we’re so proud of you. Keep up the good work. Lovingly, Findley Jack and his human Denise,” reads Province.

This envelope came with $20 in cash. The Social Media influencer also is being sponsored by Purina for a free year of weight loss cat food. And she also has her own line of merchandise you can find online.

But it’s not all perks for Miss Block. She still has a long way to go on her weight loss journey.

But at the hospital, they want her down closer to 10lbs. If her weight loss is successful, she will have lost more than 50% of her body weight. To put it in human terms, it’s like going from 300 lbs down to 150. No easy feat.

But Cinder will have to be successful if she wants a healthy life.

“We’ve cut her life expectancy by years by having that much weight on her, and so we’re hoping to give her, 15 years of life, but only if she gets down to normal body weight,” said Kiffney.