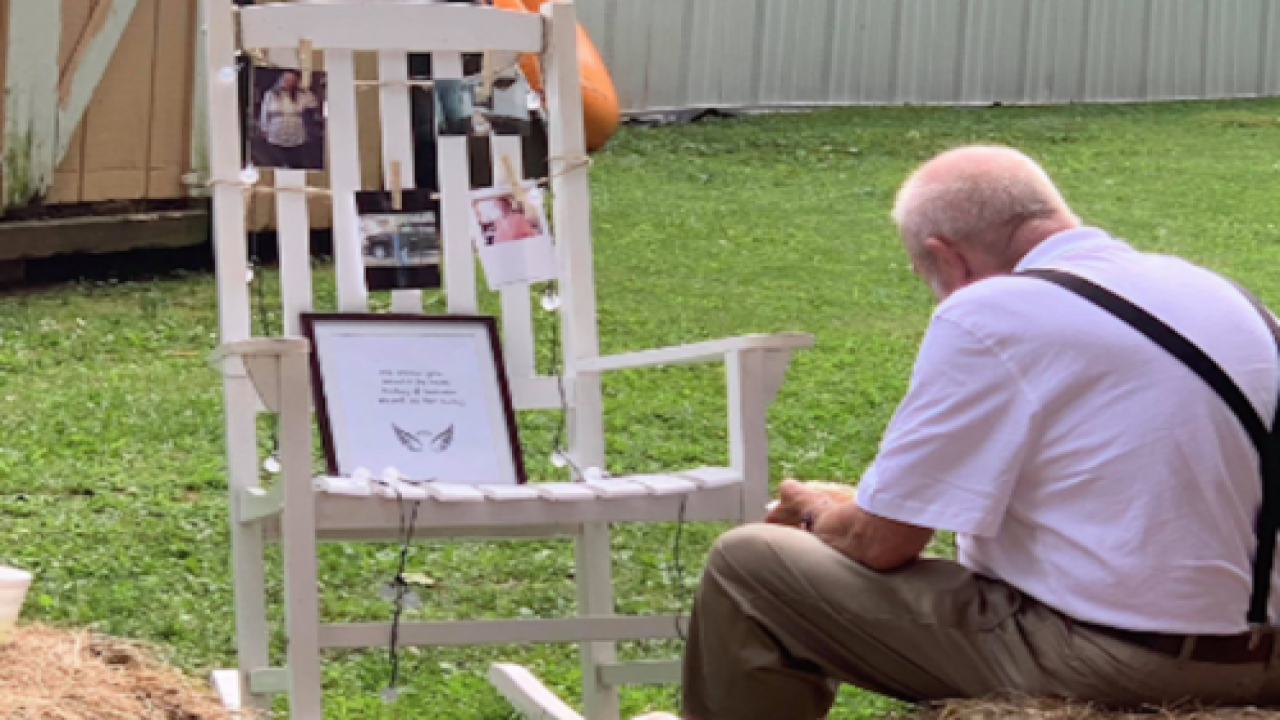 Hope you’ve got some tissues handy because you’re certainly going to need ’em for this story. When Sahrah Elswick said “I do” on her wedding day, she wanted a way to honor those who could not be there to celebrate with the bride and groom — including her late grandmother, Barbara Gray.

In a sweet setup at the outdoor wedding, she draped a rocking chair with strung lights and photos of those who were with them only in spirit. In the seat of the rocking chair was a framed message that read, “We know you would be here today if heaven wasn’t so far away.”

When the other wedding guests were inside celebrating at the reception, the bride’s grandfather, Billy Gray, went back outside to the rocking chair to share a moment with his late wife, who passed away two years ago.

Gray ate his meal sitting next to the memorial, and a photo of the moment was captured at the wedding and later shared on social media by the bride.

“Pawpaw sat and ate with mawmaw today at my wedding,” she wrote on Twitter:

Pawpaw sat and ate with mawmaw today at my wedding ð¥º pic.twitter.com/GEXWMCfgXB

It wasn’t long before the photo started to gain traction online — it had 178,000 likes and over 19,000 retweets on Twitter at the time of publication — and the kind messages for Elswick’s grandfather began to pour in.

Pawpaw is the greatest man alive.

Others, like @WolfmanBondoo7, pointed out how cry-worthy this story truly is, tweeting, “I have something in my eye…”

Meanwhile, Twitter user @AHAJ posted a meme that pretty much sums up how everyone feels after hearing this story:

Those who read this story online weren’t the only ones weeping, either, as the bride told Brides magazine that this moment touched pretty much everyone at the entire wedding.

“When I saw him sitting there, I immediately started crying,” Elswick told Brides. “It just moved me. I was completely in awe at how much he loves her. I think everyone was crying when he did it. It was beautiful.”

Elswick told Best Life that her grandparents were married for 45 years before her grandmother passed away. But clearly, their love affair lives on.

“Everyone seems to be so touched by his small act of love, it warms my heart,” Elswick told Best Life of the attention the photo is getting online. “Everyone deserves someone who would do the same thing as my grandfather did without looking for any sort of attention. I want the photo to send the message that love never dies.”

What a touching sentiment! Did those tissues come in handy after all?