Could Gonzaga join the MW? 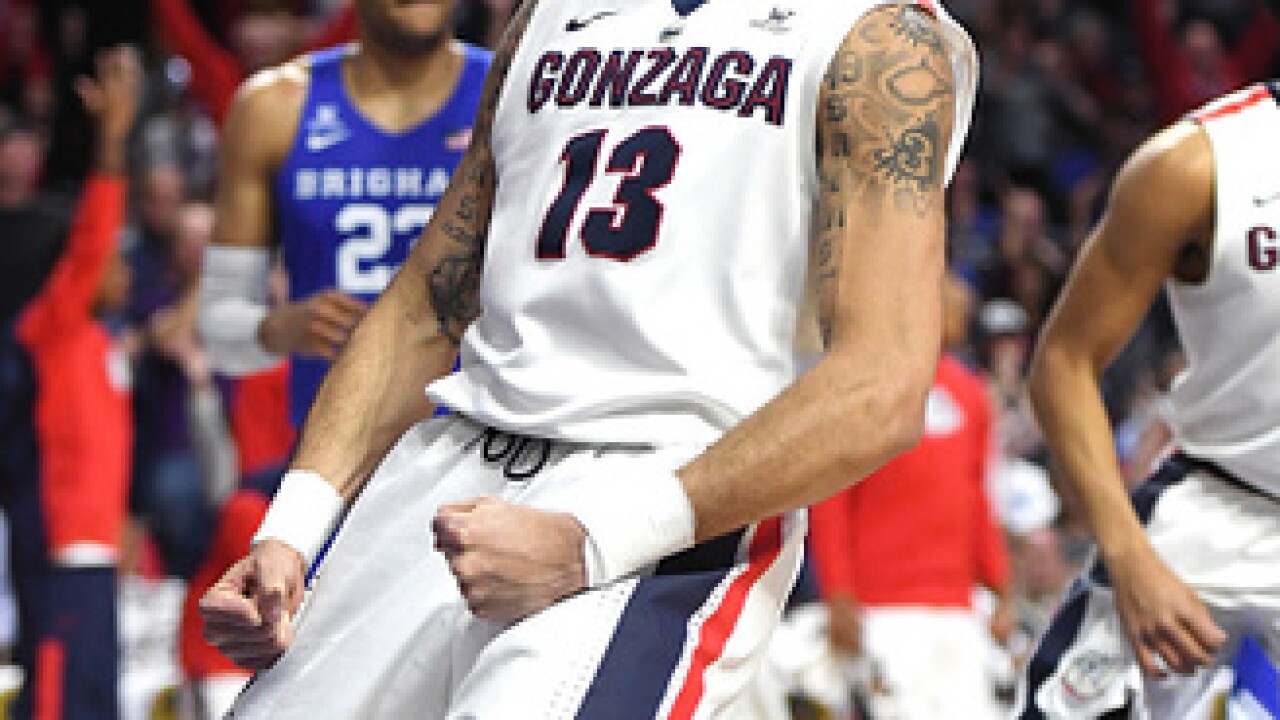 Copyright 2018 Scripps Media, Inc. All rights reserved. This material may not be published, broadcast, rewritten, or redistributed.
Ethan Miller
LAS VEGAS, NV - MARCH 06: Josh Perkins #13 of the Gonzaga Bulldogs reacts after scoring off a Brigham Young Cougars turnover during the championship game of the West Coast Conference basketball tournament at the Orleans Arena on March 6, 2018 in Las Vegas, Nevada. The Bulldogs won 74-54. (Photo by Ethan Miller/Getty Images)

The NCAA tournament officially kicked today as fans got a first look at the 8 teams that will be taking to the court inside Taco Bell Arena.

One of those teams could be playing here in the near future could be Gonzaga.  There have been multiple talks of the Zags joining the mountain west conference as earliest as next season.

The Zags got their first glimpse of Taco Bell Arena this afternoon and it could very well be a venue that might be on their schedule next season against Boise State.  Gonzaga hasn't been shy about discussing the possibility, either.

"We have been talking to a lot of people so this was the one that leaked out.  I have said all along we are going to do what's best for Gonzaga and the program moving forward," said Gonzaga Head Coach Mark Few.

"We will play who we play it doesn't matter who is in front of us so if we move we move.  we just have to come and play our game at the end of the day," said Gonzaga Senior Guard Josh Perkins.

Leon Rice is very familiar with Gonzaga as he was once an assistant coach with Gonzaga for 12 seasons prior to becoming the Broncos head coach.  Rice says the move would only elevate the conference.

"You add schools like that and brands like Gonzaga they were in the national championship last year so it's going to lift all the boats.  We got other programs that are on the way up and all of a sudden you are going to look around and you are going to have one of the best basketball leagues not just in the west but in the country,” said Head Coach Leon Rice.

Gonzaga has won the West Coast Conference regular-season title 18 times in the past 20 years and Adam Morrison who is a zag legend isn't totally sold on the move of switching leagues.

"Im split on it, to be honest.  I understand that our conference is not the greatest RPI wise that always hurts us down the road around tournament time.  My issue is the Mountain West is a two or three bid league every year. Do students come from Northern California so are we going to say hey we aren't going to play you guys in front of your fans?  We have a good fan base on the west coast obviously. We are from more affluent areas so people can travel more," said, Former Gonzaga Basketball player Adam Morrison.

Then they are the fans that I spoke with and they seem pretty excited about the zags making yearly trips to the city of trees.

"So selfishly I would love for them to join this conference since I live here in Boise.  It would be fun to come see them the one time a year when they come around," Kyle Desomber fan of Gonzaga.

"Well, I know BSU will have two more season seats cause I will have season seats.  They need to go where the conference appreciates what they do and what they bring to the league," said, Kyle Hutchinson fan of Gonzaga.

“We would love to see Gonzaga here two or three times a year to play us.  I think they would do very well in the conference and I think it would boost the overall conference,” said Tyler Nordberg fan of Gonzaga.

One thing that adding Gonzaga would do for sure is turning the Mountain West into a two-bid league.  Only time will tell and we will probably have more answers once the college basketball season is over.