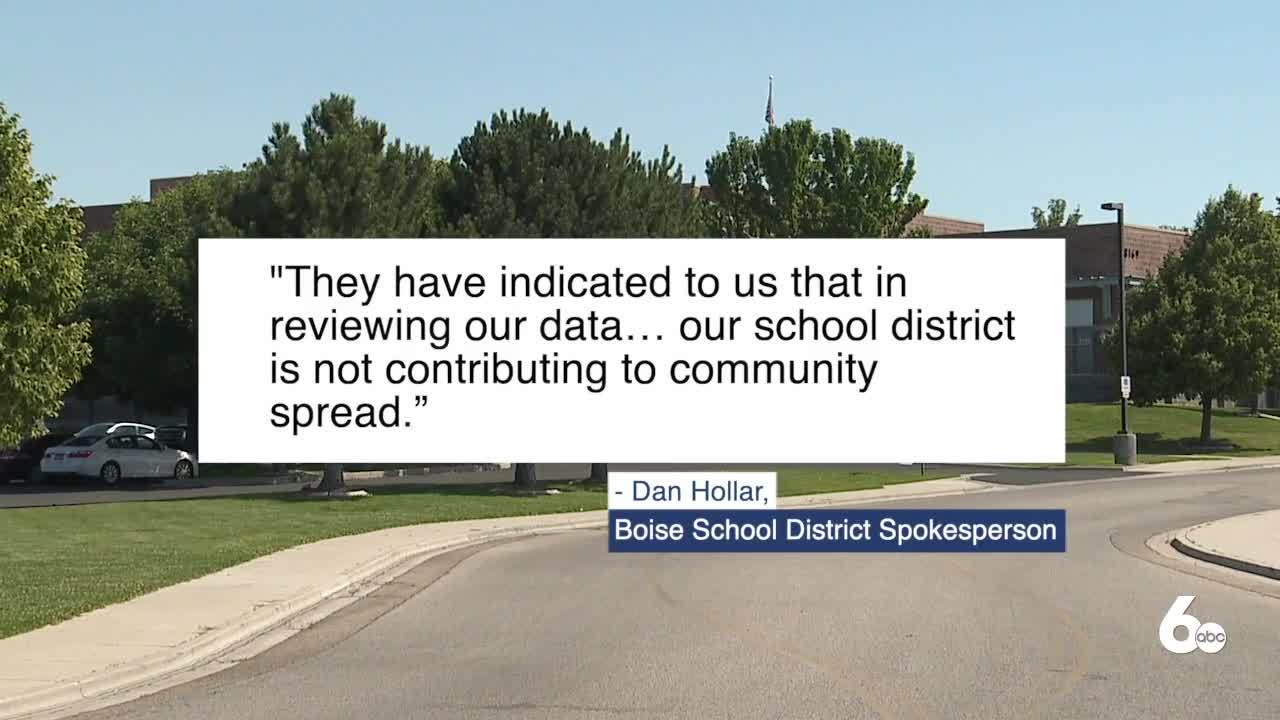 A Boise School District spokesperson explains why they’re not letting CDH's "likely" return to the Red Category stop them from providing some in-person learning.

ADA COUNTY, Idaho — Central District Health’s (CDH) color-coded category recommendations will be announced Tuesday, but they’ve already said they anticipate a rollback to Red (Category 3) in Ada County given its recent rise in COVID-19 cases. One major school district, however, explains why they’re choosing not to let that stop them from providing some in-person learning.

During Phase One of Boise School District’s (BSD) hybrid learning model -- which included special education and Pre-K up to 2nd grade -- they recorded six positive cases throughout the district, according to district leaders. They also reported that since school started in August, only one of those cases was "the result of an exposure that happened during a school-based activity."

Data on Phase Two, which began last week and included up to sixth grade, has yet to be released.

“We want to be returning to school, and returning to practice and competitions in a very careful manner," said Dan Hollar, public affairs administrator, Boise School District.

And while CDH says they’re anticipating a shift back to Red in Ada County, which typically recommends remote learning over in-person learning, they have also released a statement saying, “at this time, CDH supports schools operating with some level of in-person learning despite the Category 3 designation.”

That’s why Hollar says BSD leaders feel okay with continuing with their hybrid model as planned, which he describes as “a staggered, incremental phase, gradual return.”

Hollar said they’re working closely with CDH, as well as other medical experts, adding, “They have indicated to us that in reviewing our data... our school district is not contributing to community spread.”

Phase Three, which includes grades 7 through 12 in the hybrid model, is still on track to begin next week on October 19, according to Hollar.

“I think it’s important for parents and students to go onto our website, boiseschools.org. Go to the COVID resource section there at the top of the page, and become familiar with your school’s pandemic plan. That’ll go a long way to helping to see that our doors remain open," said Hollar.

He added, “If everyone continues to do what they can, we’ll be able to keep our doors open going forward, but that really is the key to make sure everybody remains safe.”

Hollar previously told Idaho News 6 that the district’s ultimate goal was to get every student back in five-day a week, in-person learning by November 9 — but they’ve since announced that they will not return to that model at all this first semester.

Ada County’s other school district, West Ada, is set to discuss possible adjustments under CDH Red Category 3 designation in a board meeting Tuesday night at 6. You can watch that here.

West Ada leaders also plan to discuss data transparency and survey results in that meeting, so follow along with our coverage.