"I believe a lot of the unemployment is caught up at this point in time," said Little. 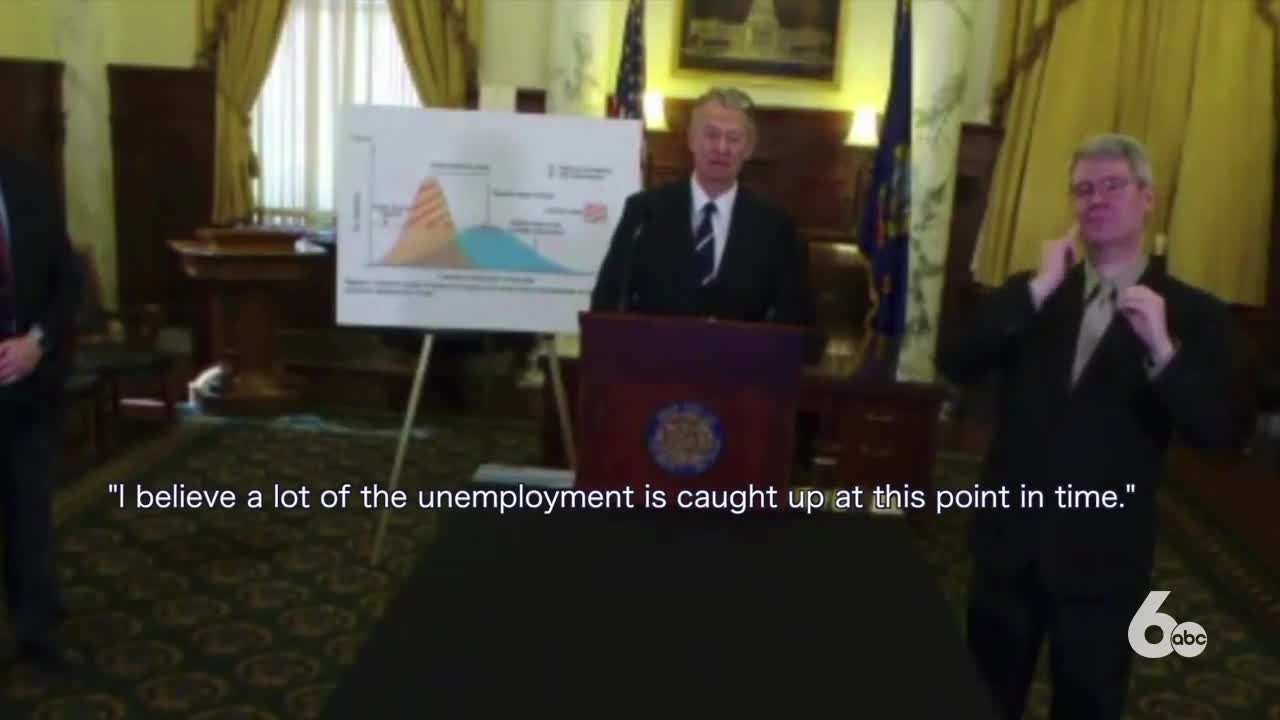 In a press conference Thursday, Governor Little shared some comments that frustrated some of our viewers.

BOISE, Idaho — In a press conference Thursday, Idaho Governor Brad Little praised the work of Idaho Department of Labor (IDOL) employees -- many of whom are working overtime to keep up with unprecedented demand, according to IDOL spokesperson Leah Reeder.

The governor pointed out the extreme amount of pressure they are under, dealing with claims in numbers upwards of 100,000 -- just in the first five weeks of the state's emergency declaration.

But when asked about the many Idahoans who are still waiting weeks for their unemployment benefits to arrive, Governor Little downplayed the situation, in a response that raised some eyebrows.

"I believe a lot of the unemployment [benefits are] caught up at this point in time," said Little.

He added, "A lot of what the concerns are we hear are the facts that there's this new federal programs -- there wasn't guidance from the federal government, there was not the software in there, so simultaneous with all the work they're doing on unemployment, there was these other new programs put in place, that I -- and, and we can get back to ya on that specific, but I think we're getting caught up on the unemployment."

KIVI's Rebound: Idaho reporter Madeline White reached out to the Facebook community to see if they agree with the governor’s statement, and many Idahoans responded, frustratingly writing that they still haven’t gotten their benefits.

"Nope [they're] not my husband was laid off on the 9th of April due to COVID-19 and still haven't gotten his claim figured out. Keeps saying stop payment, etc. So the governor is wrong about benefits [being] caught up," writes Brandi McKay in a Facebook comment.

"5 weeks and nothing," writes Alisa Mitchell. "I’m the main bread winner in my family. We are going to lose everything if something doesn’t come in soon. Where’s our money!?"

However, all of the Idahoans quoted in this story tell us they were laid-off, rather than self-employed.

"It's been 7 weeks since I filed. 'Pending issue stopping payment.' I was told someone would call within 4-6 weeks of filing," writes Victoria Brenner.

In just an hour’s time, we got nearly 50 comments just like these ones.

"I have been waiting 6 weeks to hear from unemployment and still haven’t received a call or any benefits. I have tried 3 times to reach someone," writes Bailey Gillish.

"We are going on week 7 and it still says program not available!" writes Trena and Barry Soto.

"I most definitely do not have unemployment. I am NOT self employed. I haven't even heard from them. I can't get through to them and it says disqualified due to issue every week. I file every Sunday morning," writes Albert Arroyo.

"5 weeks behind," writes Logan King about his wife's unemployment benefits.

Visit our Rebound page to learn of resources to protect your bottom line, and to learn more about coronavirus relief as part of our original reporting series, Rebound: Idaho.