Rebound Idaho: Compensation for the self-employed who are out of work 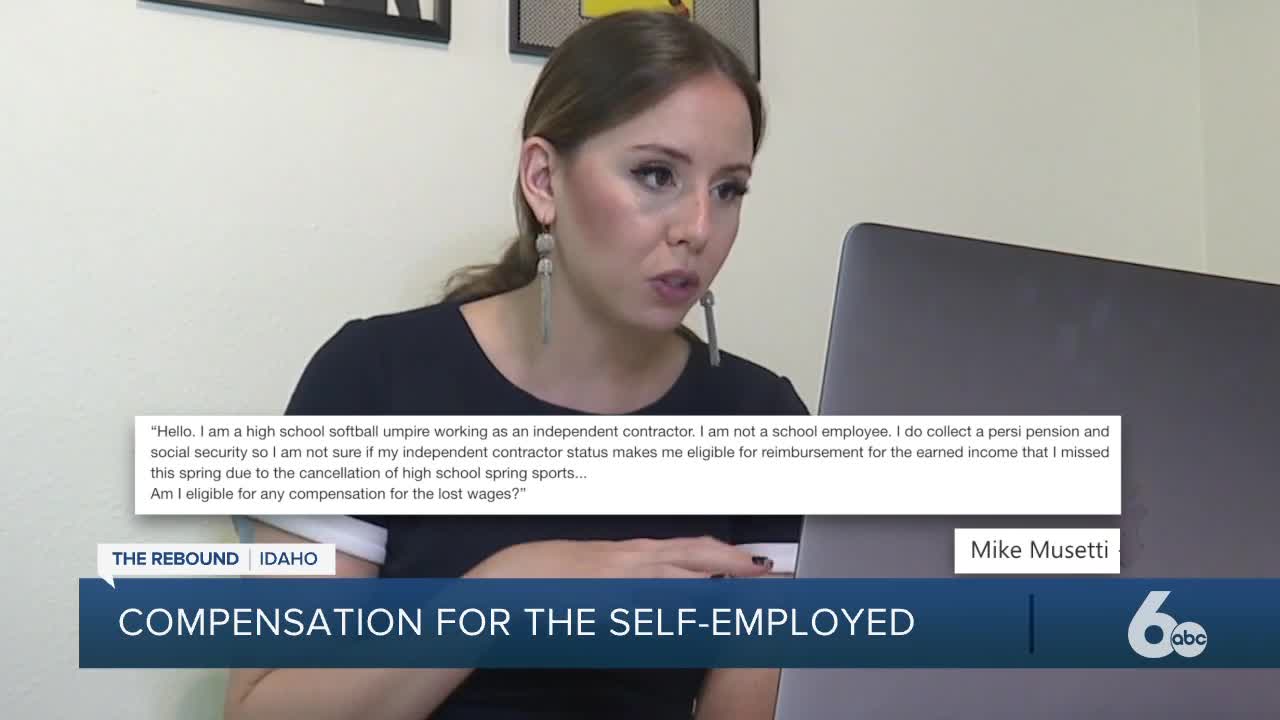 BOISE, Idaho — Navigating the government's lending and insurance programs can be tricky -- especially if you're self-employed. That's why we set out to gain some clarity on the issue.

I spoke with Idaho Department of Labor (IDOL) representatives to see if I can get some of your questions answered.

Recently, a local high school softball umpire reached out to me named Mike Musetti, who works as an independent contractor (rather than as a school employee). This is what he said:

"I do collect a PERSI pension and social security, so I am not sure if my independent contractor status makes me eligible for reimbursement for the earned income that I missed this spring due to the cancellation of high school spring sports... Am I eligible for any compensation for the lost wages?” Musetti wrote in an email.

In a Zoom interview with Leah Reeder, a spokesperson for IDOL, I forward Musetti's question on to her.

“Okay this is a good question," Reeder said. "And it’s a question that we’re getting a lot of. Normally -- under normal circumstances -- if you’re self-employed, your employer hasn’t been paying unemployment insurance taxes on your behalf, so you wouldn’t be eligible for unemployment insurance. So normally he wouldn’t be. But part of the CARES act, the federal program, they have allowed us to pay these folks unemployment insurance with federal funding — the problem is we have not done that before, and so we’ve had to implement processes with our system and we’ve had to wait for the federal government to give us guidance on how to do that. And so we’re hoping mid-May that we’ll be able to start issuing these payments.”

But what if Idahoans like Musetti just can’t wait until mid-May to be paid? I asked whether it’s an option to cast a wide net by also applying for the Paycheck Protection Program and Economic Injury Disaster Loan — since self-employed people are now eligible.

Essentially, if you get the loan first, then you would have to report that -- and at that point you would not longer be eligible for benefits.

And on whether Musetti is eligible for benefits given he collects PERSI pension and social security, Reeder said he is.

“He’ll want to make sure he reports it to us, but it would not make him ineligible for benefits," said Reeder.

Still, IDOL representatives say Musetti and other self-employed Idahoans should apply for unemployment benefits ASAP, and then submit certification every week even if they haven’t received benefits or have received an official notice.

More resources that can help protect your bottom line in the interim are available here, or on our Rebound: Idaho Facebook group.

To recap: According to IDOL representatives, under the federal government’s CARES act, self-employed Idahoans are now eligible for unemployment insurance. However, they predict those funds won’t be distributed until mid-May. Still, they advise applying and submitting certification on their online portal each and every week. And remember: people on social security are eligible for benefits.