State refuses to recognize bighorn as biggest ever for Idaho 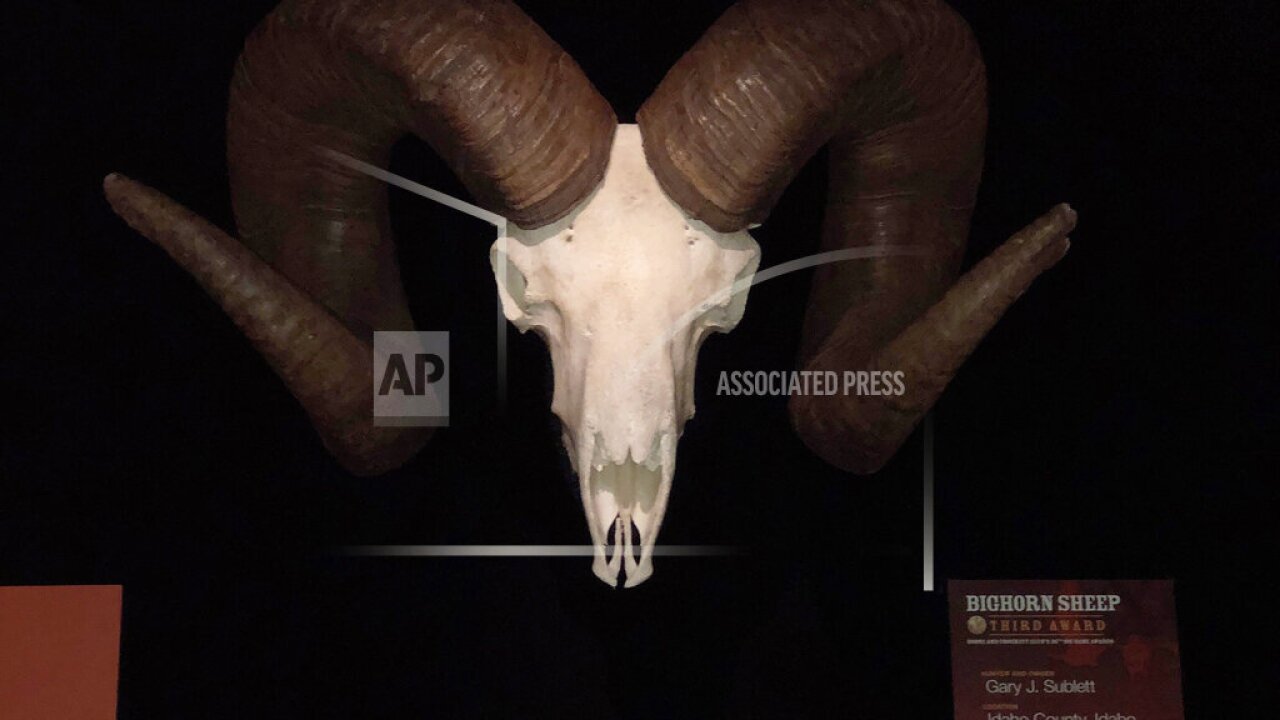 Shelby Stephenson/AP
This undated photo provided Tuesday, May 28, 2019, by Wonders of Wildlife National Museum and Aquarium in Springfield, Mo., shows the skull and horns of a Rocky Mountain bighorn sheep, displayed at the museum. The Idaho Department of Fish and Game will not recognize as a state record a bighorn sheep killed nearly three years ago by a Nez Perce Tribe member because the agency says the ram was shot in violation of state hunting rules. That's even though those regulations do not apply to tribe members on ancestral lands. But the Boone and Crockett Club hunting group has recognized the kill by hunter Sublett in September of 2016 as being within his tribe's 1855 rights. (Shelby Stephenson/Wonders of Wildlife via AP)

BOISE, Idaho — The Idaho Department of Fish and Game will not recognize as a state record a bighorn sheep that was killed nearly three years ago by a Nez Perce Tribe member because the agency said the ram was shot in violation of state hunting regulations, even though those regulations do not apply to tribe members hunting on ancestral lands.

But the Boone and Crockett Club hunting group has recognized the kill by hunter Gary Sublett in September 2016 as being within his tribe's 1855 rights and has invited him to its Big Game Awards banquet in early August in Springfield, Missouri, where the bighorn's head will go on display.

The animal's massive horns rank No. 1 for Idaho and No. 26 for the U.S. and Canada on Boone and Crockett's list of largest Rocky Mountain bighorns.

"It is the largest that we have recorded from Idaho," said Justin Spring, director of Boone and Crockett Club's Big Game Records. "From what we've seen, there were no reasons why we wouldn't accept that entry."

Idaho Fish and Game had closed the area to bighorn sheep hunting and Sublett said he was heavily criticized after he killed the bighorn at the end of a three-day hunt in an area called Hells Canyon. The canyon forms part of the Idaho-Oregon border and Sublett was on the Idaho side of the canyon about 40 miles (65 kilometers) west of the Nez Perce Tribe's reservation in northern Idaho but within the tribe's ancestral lands.

"There were people calling me everything but a human being," said Sublett. "In this canyon there are petroglyphs and arrowheads. My tribe has lived in that canyon for over 10,000 years."

Fish and Game spokesman Roger Phillips said state officials recognize the treaty but won't recognize the bighorn as being the biggest killed in Idaho.

"We're not going to call it an illegal kill," said Idaho Fish and Game spokesman Roger Phillips. "But for our state records, they have to be in accordance with our fish and game laws."

The 1855 treaty gives Nez Perce Tribe members access to federal public land on about 26,500 square miles (69,000 square kilometers) of the tribe's ancestral areas that are now part of Idaho, Oregon, Washington and Montana. About 3,500 tribal members can use those rights retained when the tribe ceded the land to the U.S. government.

The Boone and Crockett Club said it recognizes Sublett's ram because of the treaty and because the tribe has a management plan for sustainable hunting of bighorns.

The tribe was notable for helping Lewis and Clark's Corps of Discovery as it traversed through the region in the early 1800s. The tribe is also known for its unsuccessful flight from the U.S. military to Canada in 1877. Sublett said he's a direct descendant of Nez Perce leader Looking Glass, killed in the Bear Paw Mountains in a battle during that attempted flight.

Sublett said he has used the treaty rights to hunt bighorns in Hells Canyon and some neighboring areas since the mid-1970s. He said he has killed 10 bighorns and that nine of them rank as trophies by scoring more than 180 points in Boone and Crockett scoring.

Bighorn poachers in Idaho face stiff penalties. In 2016, Paul Cortez of Nampa received a fine of $10,000, 30 days in jail and a lifetime hunting ban for killing a trophy bighorn sheep along the Salmon River in Idaho.

Sublett said there was a lot of publicity about his bighorn ram before he killed it, including speculation it might be a potential trophy for Idaho's annual bighorn ram auction tag that could sell for hundreds of thousands of dollars. But that ended after Sublett, 62, killed the ram.

"They acted like I basically robbed the bank and got away with it," he said.

The Nez Perce Tribe declined to comment about the bighorn.

The tribe has played a leading role in Idaho in attempting to preserve bighorn sheep habitat. Among those efforts, the tribe was part of a federal lawsuit that concluded in 2010 and forced the removal of domestic sheep from parts of the Payette National Forest, including portions of Hells Canyon. Domestic sheep carry diseases that can wipe out bighorn herds.