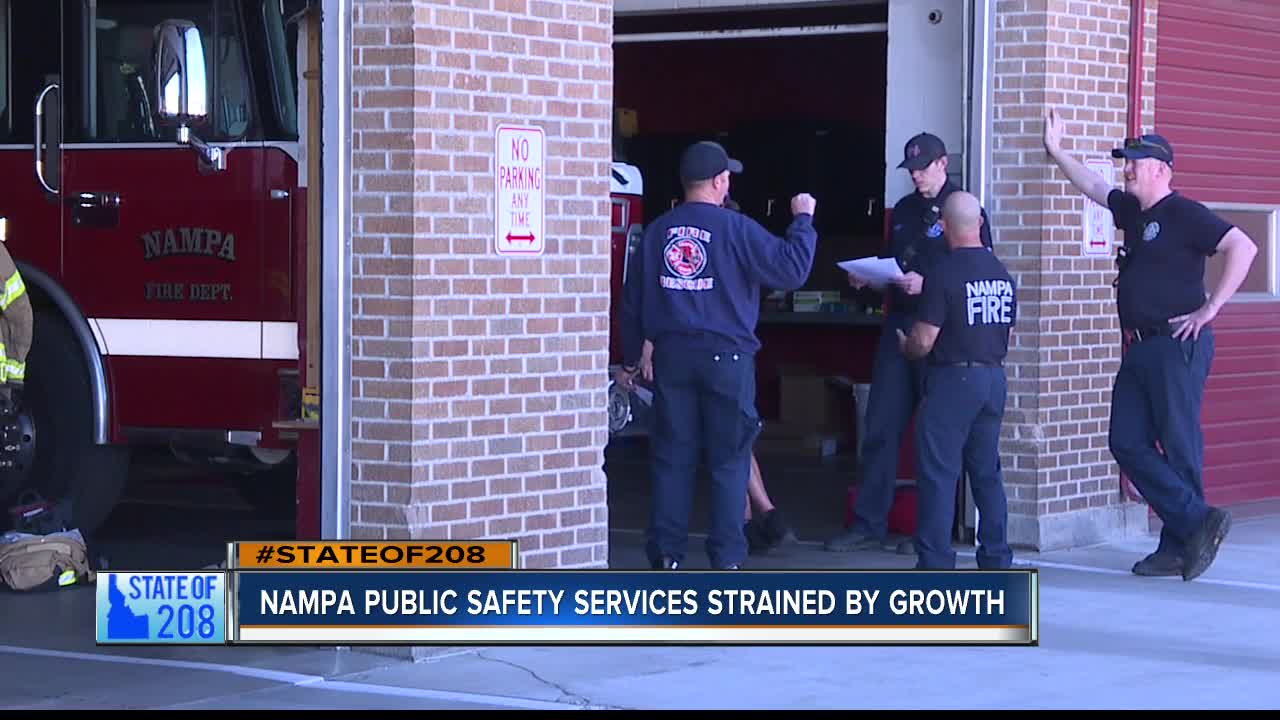 With a skyrocketing population and limited staffing, Nampa public safety officials aren't able to respond to incidents as quickly and effectively as they'd like to, according to sources.

NAMPA, IDAHO — Both Nampa Fire and Police chiefs tell 6 On Your Side's Madeline White that with a skyrocketing population and limited staffing, they aren't able to respond to incidents as quickly and effectively as they'd like to.

"Every minute, and even seconds count... every minute we're away from that scene, things get bigger," said Chief Kirk Carpenter, Nampa Fire Department.

When it comes to keeping our neighborhoods safe and saving lives from burning buildings, it's hard to live up to high standards of service when you're stretched so thin.

"We wanna be ahead of the curve on the crimes," said Chief Joe Huff, Nampa Police Department. "Quite frankly it's why you got in this job, it's to put the bad guys in jail."

At Nampa Fire Department, over the last 12 years, the average number of incidents handled by a single unit went from 1100 to almost 1700.

So while more calls are added to their plate-- calls often even overlapping-- both departments remain "bare bones." This-- the fire chief says-- slows their ability to respond.

"We need to make an intervention very early to raise the success of a positive outcome," said Carpenter. "The average response time [in Southwest Nampa] is 6 minutes and 43 seconds, which is over the national standard that we want to meet."

Fire Chief Carpenter says ideally they would need about 32 new personnel on their team.

"We're, ya know, 12 years without growth in the Fire Department," said Carpenter.

Though the police department got the first new positions they'd gotten in a decade last year when they got six new positions, the police chief says they could still use about 30 more officers as well.

"Our guys and gals are working a lot of overtime... we wanna do programs that are proactive for the community," said Huff. He added, "I'm not trying to put fear into anybody because we're doing a fine job right now, we could just do that much better if we had that many more resources."

And while Nampa's recently boosted impact fees on development will help in funding facilities and equipment, the fire station is hoping Nampa City Council will cut them some funding for a small team of new fire fighters he said they need to open a station in Southwest Nampa-- where he says response times dangerously exceed 6 minutes.

"You see throughout our commuity that we're tactically situated right? As our stations we do that on purpose so that we can cut those response times down. The difficulty is Nampa is growing so fast that we are no longer able to keep up tactically in our positioning," said Carpenter.

If you're interested in more of your tax dollars going to fund new positions in these departments, reach out to your Mayor and city council members.