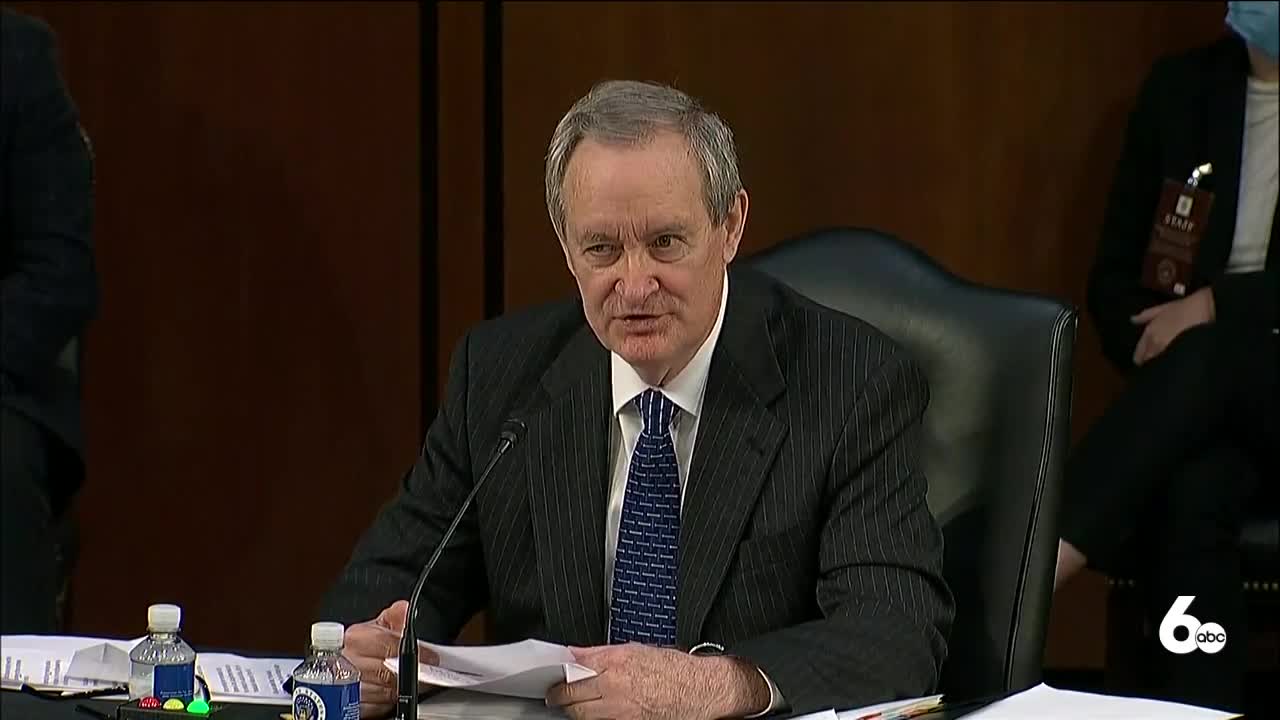 “Judge Amy Coney Barrett has exemplary academic and legal credentials and is preeminently qualified to serve on our nation’s highest court,” said Crapo.

BOISE, Idaho — U.S. Senator Mike Crapo (R-Idaho) put out a statement after the opening statements in the Supreme Court confirmation hearing for Judge Amy Coney Barrett. Sen. Crapo, a member of the Senate Committee on the Judiciary, delivered remarks during the first day of the confirmation hearing.

“Judge Amy Coney Barrett has exemplary academic and legal credentials and is preeminently qualified to serve on our nation’s highest court,” said Crapo. “In particular, Judge Barrett’s thoughtful exploration of precedent and the Doctrine of Stare Decisis demonstrates she is both intellectual and deliberative in her understanding of law. Moreover, it is evident she understands the role of a fair and proper judge.”

Sen. Crapo begins speaking at the 38:07 point in the Facebook video below.

If confirmed, Judge Barrett will fill the seat left vacant by Justice Ruth Bader Ginsburg, who passed away last month at 87. The confirmation hearing will continue on Tuesday and Wednesday. A news release from Sen. Crapo's office says he will have an opportunity to question Barrett.

You can read the full statement Sen. Crapo gave below:

Judge Barrett, welcome and congratulations on the high honor of your nomination.

I think it is important to set the record straight on a few items. The first attack is that we are rushing too fast, and violating rules, customs and norms of the Senate in rushing through these proceedings. This hearing is 16 days after Judge Barrett’s announced nomination. More than half of all Supreme Court hearings have been held within 16 days of the announcement of the nominees. This hearing is no different.

A couple of examples:

These proceedings are following right along in the same process that has historically been the process of the Senate.

So, then, the argument is made that this is an election year and the Republicans said in 2016 that in an election year, they wouldn’t move forward with President Obama’s nomination. A vacancy has arisen in a presidential election year 29 times. Every single one of those 29 times, the sitting President made a nomination to replace the vacancy.

19 of those 29 times, the parties of the President and the Senate majority were the same. 17 of those nominees were confirmed. By contrast, of the 10 times in which the Senate was controlled by the party opposite of the President, only one time Senate proceeded to fill that vacancy. In fact, vacancies under a divided government have not been filled for over 130 years, going back to 1888.

Much like when the Senate exercised its constitutional right fully consistent with precedent in 2016 not to fill the vacancy when there was divided government, the Senate is today exercising its duty to move forward with processing this nomination, just like the vast majority of Senates in the past.

Any claim that his process is unusual or violates precedent of the Senate is simply false.

Other attacks suggest that the Republican members of this Committee and the President are trying to engage in court packing. That’s a novel one. The Senate is following standard procedure with regard to a vacancy. My colleagues on the other side are actually proposing court packing--that statutorily changes the law to add more members to the Court. That effort should be rejected. This is not court packing. Threatening to pass a law and change the court is court packing.

There have been standard arguments against Judge Barrett:

She’s not. We all know that. This is simply the tired, worn out argument that is constantly made every time a Republican President nominates a candidate to the bench of the Supreme Court of the United States. It has never been true, and it will not be true with Judge Barrett.

So, then, the attack is, “Republicans don’t care about people’s health. They won’t try to get COVID relief out. We’re here in the Judiciary Committee hearing when we ought to be getting COVID relief passed.”

I have heard several of my colleagues say Republicans are refusing to work on helping to address the COVID crisis. This coming from colleagues, who just a month or so ago, voted unanimously to filibuster a $500-$600 billion COVID relief package in the Senate that put money toward:

We were stopped from proceeding with this legislation by a filibuster of those who now accuse us of not wanting to try and do something. We stand ready if you’ll simply let us go to the legislation and pass it.

Judge Amy Coney Barrett has exemplary academic and legal credentials and is preeminently qualified to serve on our Supreme Court. Following her graduation from law school, Judge Barrett clerked for both the U.S. Court of Appeals for the District of Columbia Circuit and the U.S. Supreme Court. At the Supreme Court, she clerked for none other than the late Justice Antonin Scalia.

Upon receiving her nomination to the Supreme Court, Judge Barrett reflected on her clerkship for Justice Scalia, citing his “incalculable influence of [her] life.” She also stated that, “his judicial philosophy is [hers] too [and that] a judge must apply the law as written.”

That’s what we need in our next Supreme Court Justice.

“Judges are not policymakers, and they must be resolute in setting aside any policy views they might hold.”

Should we not take her at her word?

A judge, Supreme Court or otherwise, must be dedicated to interpreting the law as written, with an unparalleled commitment to our Constitution. I have seen nothing that would indicate she is not telling the truth when she says that is her view of how a judge should conduct themselves.

I have met several Supreme Court nominees in my service in the Senate. Throughout, I have continued to maintain that an emphasis on following the law and upholding our Constitution must be a central characteristic of the justices selected for this highly-influential federal branch.

Judges have a great responsibility to carefully exercise their authority within the limits of the law. Our court system has the responsibility to preserve our constitutional rights, ensure a limited government and provide speedy and fair justice.

Following her clerkships, Judge Barrett spent time in private practice before beginning her tenure as a law professor. Her academic scholarship and lengthy analysis of issues facing the federal courts make her uniquely well qualified to serve on our nation’s highest court.

In particular, Judge Barrett’s thoughtful exploration of precedent and the Doctrine of Stare Decisis demonstrates she is both intellectual and deliberative in her understanding of the law.

Moreover, it is evident she understands the role of a fair and proper judge. In September 2017, Judge Amy Coney Barrett came before the Senate Judiciary Committee after being nominated to the U.S. Court of Appeals for the Seventh Circuit. During that hearing, she repeatedly expressed her commitment to independent and unbiased decision-making. I was proud to support her confirmation to the Court of Appeals both in Committee proceedings and on the Senate floor.

Judge Barrett’s remarkable resume shows she is a pioneer in the legal field. Judge Barrett will be the fifth woman and the first mother of school-age children to serve on the Supreme Court. Judge Barrett, in many ways, is the ideal candidate to fulfill this current vacancy.

Mr. Chairman, I look forward to hearing more from the nominee about her experience and judicial philosophy. The next few days will prove invaluable as we discuss with Judge Barrett, at length, the proper role of a judge in our legal system.

I look forward to this hearing.