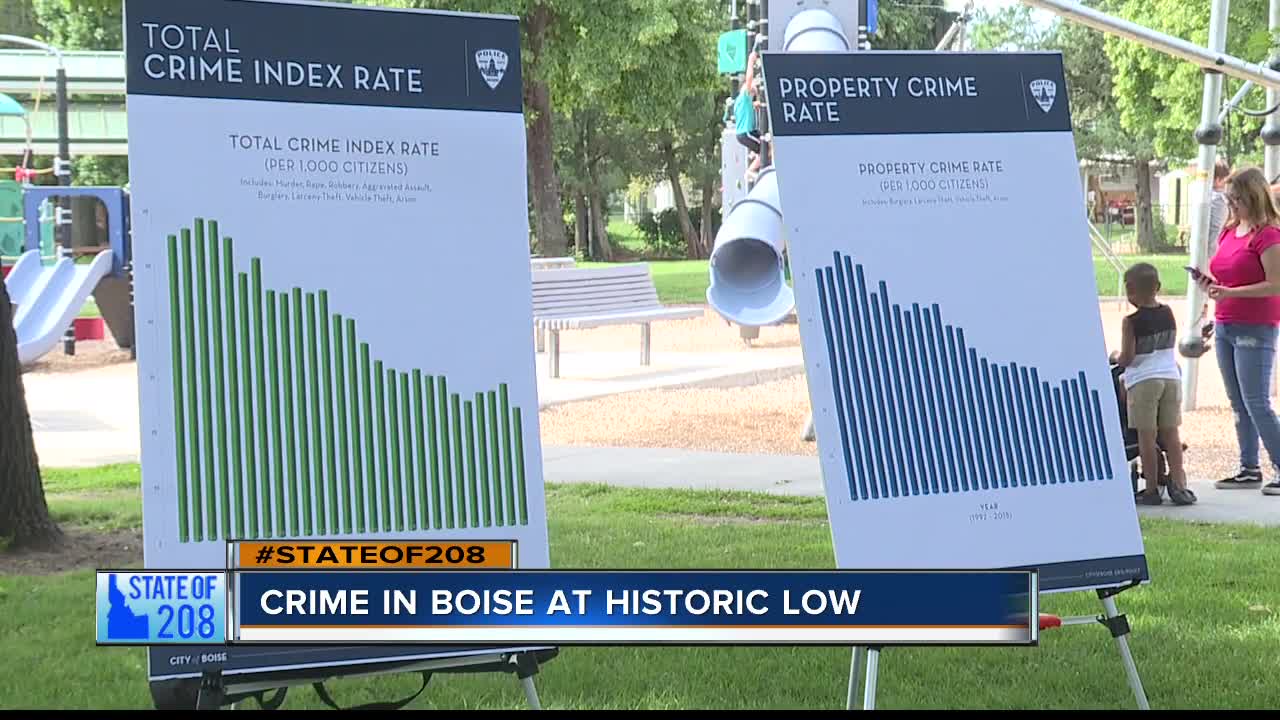 The Boise Police Department’s most recent crime report shows overall crime rates at their lowest point since the Department started keeping consistent statistical crime data in 1992. Today’s overall crime rate is down 61 percent from its historic high in 1994, driven in large part by a 63 percent drop in property crimes, officials said.

“Boise has become one of our country’s safest communities,” said Boise Mayor David Bieter, during a Monday morning press conference at Boise’s Fairmont Park. “These numbers … are the result of our deliberate strategic focus on community policing and creating a culture of resident engagement among our officers. The result is that our community is growing and thriving, but crime is not.”

The 2018 numbers (the latest available) showed a rate of 22.75 crimes per 1,000 residents in Boise, down from 58.36 in 1994. The new numbers also represent a 17 percent drop from 2017 and a 25 drop over the past decade. These numbers include crimes like murder, rape, robbery, aggravated assault, arson, burglary, larceny-theft, and motor vehicle theft.

“The drop in crime is not just a reflection of the police department, but of all the hard work we have put in as a community,” said Bones. “Credit also goes to everyone who has helped build strong neighborhoods, invested in community schools, created opportunities for youth to be active, and worked together with businesses to build a strong and engaged community.”

More people are being encouraged to take an active role in crime prevention. Bones pointed out that said new residential and commercials developments are being built with safety in mind as developers add items like better lighting, open landscaping and sidewalk seating -- all which work to foster an engaged community and lower crime rates.

“In Boise, we have a community where neighbors look after neighbors and where police have the time and the opportunity to focus on quality of life issues like graffiti and burglary,” Bones said,

However, officials pointed out some areas of growing concern.

An 18.3 percent increase in narcotics violations reflects how the nation’s growing opioids crisis is showing up locally.

“The impacts of this growing scourge in our community are clear and we are working closely with partners across the Valley to educate our residents about the dangers of opioids, coordinate treatment options, and create law enforcement strategies,” Bieter said.

Also, police calls for service related to mental health issues –- including attempted suicides and suicidal subjects -– continue to rise in Boise. A shift in how the data is collected makes the categories slightly different year over year, but the rising trend is clear: police responded to 9,686 mental health related calls in 2018 compared to 5,726 calls in 2005.

To help address this concern, the Boise Police Department employs a mental health coordinator to help connect residents with services that could assist them. In addition, the department is piloting a project to add a uniformed officer in the role of a mental health liaison officer, to work with the mental health coordinator as a co-responder team. The team proactively works within the community to intervene by providing support to individuals in crisis -- and to those identified with a mental illness -- to work toward a positive result.