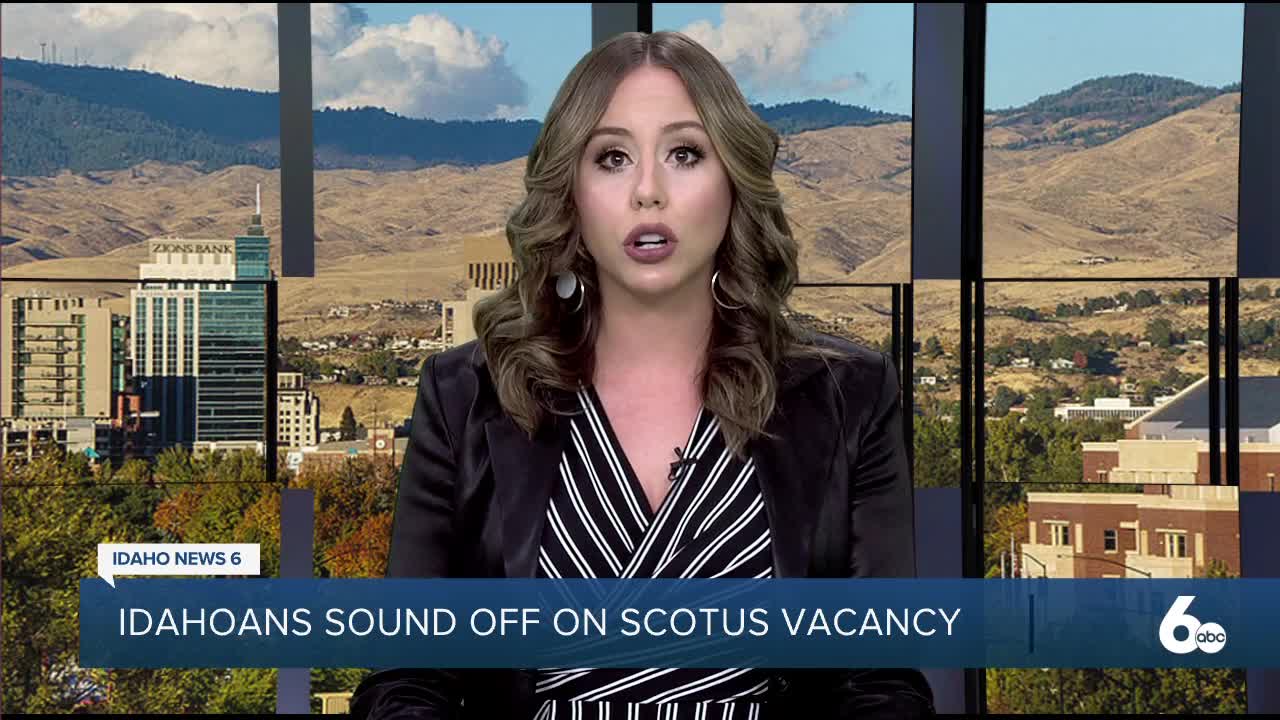 At political rallies in Boise this weekend, Idaho News 6 spoke with people from both sides of the aisle regarding President Trump's nomination for the U.S. Supreme Court.

BOISE, Idaho — Political rallies were on the docket in Boise this Saturday as we spoke with people from both sides of the aisle regarding President Trump's nomination for the U.S. Supreme Court.

President Trump has officially announced appellate court judge Amy Coney Barrett as his nominee to fill the vacant spot on the Supreme Court following the death of Ruth Bader Ginsburg.

Barrett is a conservative judge that mentored under former justice Antonin Scalia, she was a law professor at Notre Dame for 15 years and would be the youngest justice ever at 48-years-old.

Judge Barrett is highly qualified in all the areas that matter – character, integrity, intellect, and judicial disposition.

She is an outstanding #SupremeCourt nominee by President @realDonaldTrump.

The nomination will be a highly contentious political issue leading up to election day, and the stakes are high for both sides.

"Every other president in history who has had this opportunity in an election year has done the very same thing regardless of what the other side is saying," said Jean Mollenkopf-Moore who is on the board of the Boise County Republican Women and was in downtown Boise supporting the president.

In 2016 the Republican-controlled Senate refused to vote on President Obama's nominee for the U.S. Supreme Court, but this time around, they have said they will vote for President Trump's.

"The Republicans would not allow a vote eight months before the last election for President Obama to choose someone, they wouldn't even consider it," said Jo Banks, a Democrat who is part of the daily demonstration that has gone on for 107 days in downtown. (This group's primary focus is to encourage people to vote.)

Today, President Trump nominated Judge Amy Coney Barrett to the Supreme Court — a jurist with a written track record of disagreeing with the Court’s decision to uphold the Affordable Care Act.

Vote like your health care is on the ballot — because it is. https://t.co/TDBQOVLP4K

Democrats feel the nomination should wait until after the election because it would be the quickest nomination in U.S. history and tilt the Supreme Court right for a generation.

"Truly, I feel like it should wait and give Ruth Bader Ginsburg time to get into the ground," said Banks.

Ruth Bader Ginsburg's dying wish was not to be replaced until after the elections.

Historically, the party that controls the Senate has traditionally blocked the other party's nominee, but with the Republicans in control of the Senate, they will take this opportunity to attempt to vote in a new justice.

On Saturday, the rallies were peaceful, and there was also a large police presence from the Boise Police Department.

There was also a march to honor Ruth Bader Ginsburg, but organizers moved that event to a virtual format citing safety issues with both security and COVID-19.