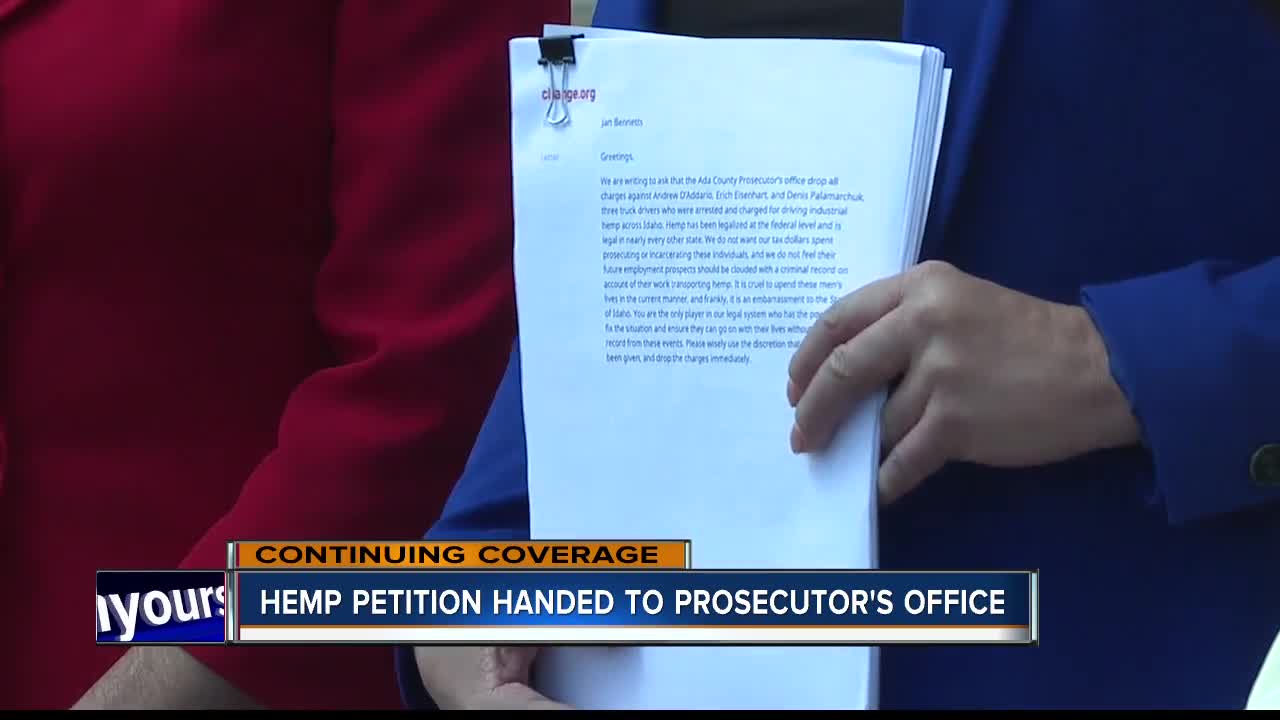 BOISE — Representatives from both sides of the aisle are hoping a public petition will save three hemp truck drivers from prosecution.

Three state legislators turned that petition in to the Ada County Prosecutor's Office Tuesday afternoon. And while it has no binding power, they're hoping it'll sway the Prosecutor's decision."

The petition doubled in signatures since we last told you about it under two weeks ago, now it has reached over 13,000 signatures from people asking the Ada County Prosecutor to drop charges against three truck drivers charged with driving industrial hemp through the state.

"These three gentleman are facing, two of them are facing sentencing, and one of them is facing a trial for what has been proven to be industrial hemp, that is not a drug, that cannot get people high," said Rep. Ilana Rubel, (D) Boise.

Representatives Ilana Rubel, a Democrat, and Republicans Dorothy Moon, and Tammy Nichols, along with the petition organizer, handed over a big stack of signatures from a petition that states the charges against the men are “an embarrassment to the State of Idaho.”

"I feel like this was just an injustice. I think it's ridiculous that we're spending taxpayer money prosecuting these guys for basically transporting an agricultural product," said Tracy Olson, petition organizer.

It’s an agricultural product that is legal federally, under the Farm Bill that passed in December of 2018, but is also legal in nearly every other state, including the states which the truckers were traveling to and from.

"So many things went wrong to get us where we are today. You know, failure to legalize hemp. Failure to fix minimum sentencing laws, which is basically what drove these men to be forced to plead guilty to being drug dealers," said Rubel.

Now the men face five years minimum sentencing, and whether or not Ada County Prosecutor Jan Bennetts will take the petition into account, is up in the air.

From the mouth of former Ada County Prosecutor, David H. Leroy, he said, "Petitions certainly have a place in influencing public officials and in giving public creedence to certain actions or inactions by a public official. But petitions in and of themselves don't alter either the laws or the enforcement of laws, nor should they."

The legislators are hoping for a decision out of the Prosecutor's office over the next couple of weeks, with the sentencing date for two of those truckers being in the middle of June.

The Ada County Prosecutor and Idaho State Police have released a joint statement following the petition, which reads as follows:

"The Idaho State Police, Ada County Prosecutor's Office and our law enforcement partners work diligently each day to handle each case in an ethical and appropriate manner. We will always listen to the concerns of citizens and those interested in the outcome of cases.

Those who signed the petition that has recently circulated and citizens interested in the outcome of those recently publicized cases can be assured that we are listening and have heard your concerns.

The Ada County Prosecutor's Office is prohibited from negotiating the resolution of cases through the media, or with others who do not legally represent the parties. The case investigated and submitted to our office, by the Boise Police Department, following the arrests of two defendants occurred over a year ago and prior to the passage of the 2018 Farm Bill. These two defendants are out of custody, represented by counsel and pending sentencing on reduced charges. The case investigated by the Idaho State Police in January 2019 is pending and our ability to comment is limited. The defendant is out of custody and represented by counsel.

The 2018 Farm Bill's intent of allowing the interstate transportation of hemp will only be realized once there is a regulatory system in place. As of this date, that system has not been developed in any state - including Idaho - and is therefore not currently in effect. As a consequence, hemp is not legal in Idaho.

We understand the desire to provide a legal pathway for an alternative crop for Idaho's farmers and for those who transport it across state lines. We are currently conducting research and working to develop a solution. We continue to be committed, as we have been, to establishing a legal framework to provide a solution to this issue going forward. Those of us who enforce Idaho's laws are bound by the laws which currently exist, not those which may exist at some future date."