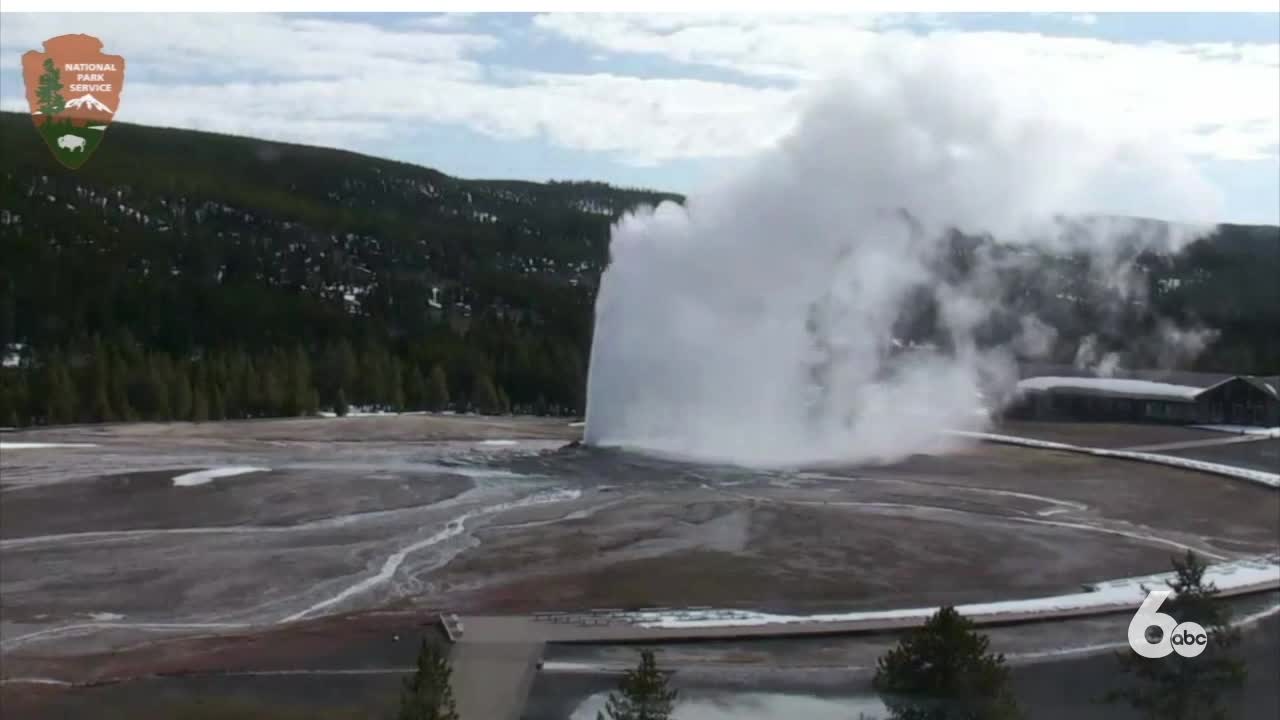 YELLOWSTONE NATIONAL PARK — This should be the first week that the west entrance of Yellowstone National park is open, but look at the web camera, and there are no cars. Because of COVID-19 the park gates are closed.

But just because you can't go to Yellowstone right now, doesn't mean you can't enjoy its beauty.

Yellowstone and other parks have live cameras including one at Old Faithful that can take you there with a few mouse clicks.

Once you log into the camera it's a waiting game. Old Faithful erupts every 92 minutes on average. Watch for the camera to start adjusting, and when you see a medium-wide shot that is obviously focused on the geyser, watch for strong puffs of steam that lead to a series large gushes, before the growing pressure causes boiling hot water to shoot into the sky. And now you can experience it, without the crowds, the clicking cameras and occasional teenager saying "That was it?'

But there are other ways to experience Yellowstone's beauty and wildlife, like a red fox prancing through the snow, or three wolf pups playing in the grass and sage brush. There is a video of something I have never seen in my many visits to Yellowstone. When I first looked I thought is was just a pack of wolves running up a hillside, but one of them is way to black. That is because he's not a wolf at all, but a black bear, outnumbered in a clash of power near the top of the food-chain.

Neither wolf nor black bear can come close to the omnipotent Grizzly. like one shown barreling down a hill. The video was shot using a high powered scope. Another shows a grizzly sow doting over her cubs in a more intimate setting but still shot at a safe distance, which with grizzlies is a long distance. There are bison and even mountain goats, gracefully dancing on jagged rocks.

Then there are the elk, one greeting visitors at the north entrance, and perhaps giving them a stark reminder of the reasons for the distancing rules that are much more stringent than the current social distancing being practiced among humans. Bull elk move a little faster than most of us, especially during the rut when power struggles arise among squeaking calls of a harem of cows.

And while you can watch Old Faithful live, there's also a close up look at a geyser that was not so faithful for many years, but has reactivated. Last year Steamboat Geyser erupted forty seven times, the most on record.

All of these videos are available on the Facebook group Yellowstone Up Close and Personal. It's a great place to see videos and stunning photos, but it is also a great resource for information like Wednesday's announcement that Xanterra, the company that operates concessions like restaurants in Yellowstone, won't operations until at least June 15th.

While we wait to see whether that happens, we can still enjoy the beauty of the nation's oldest national park online.