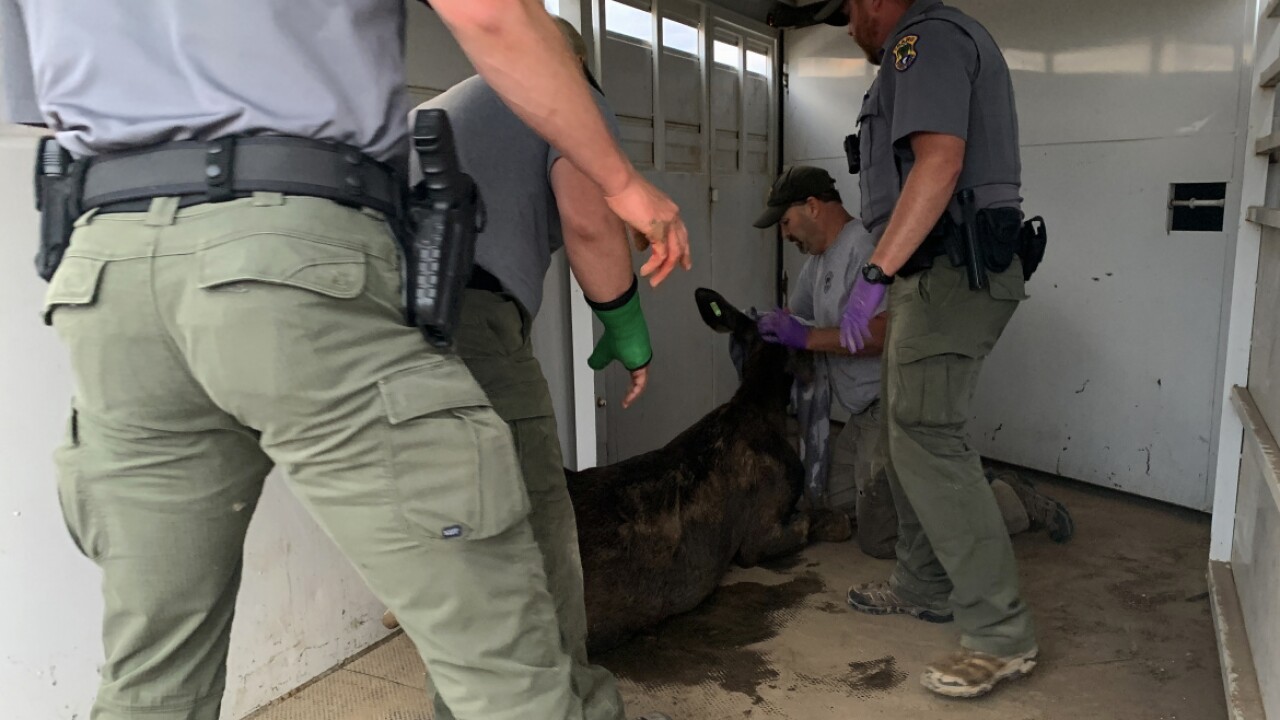 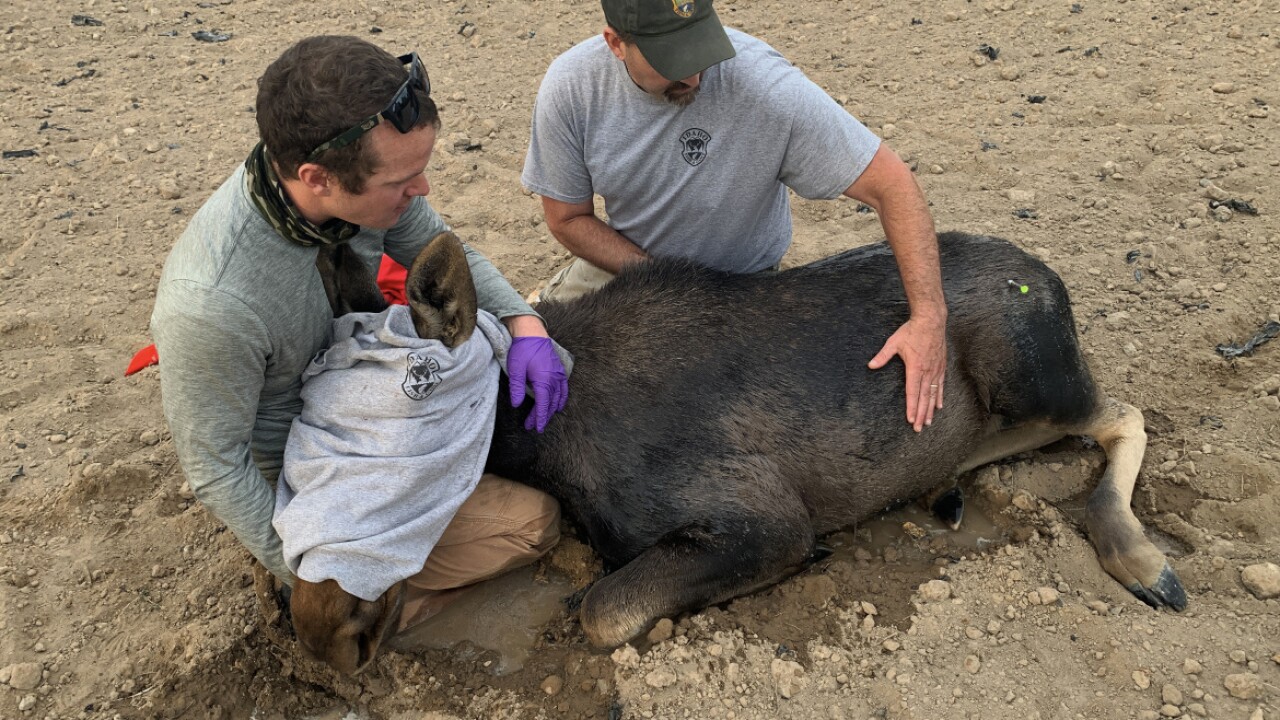 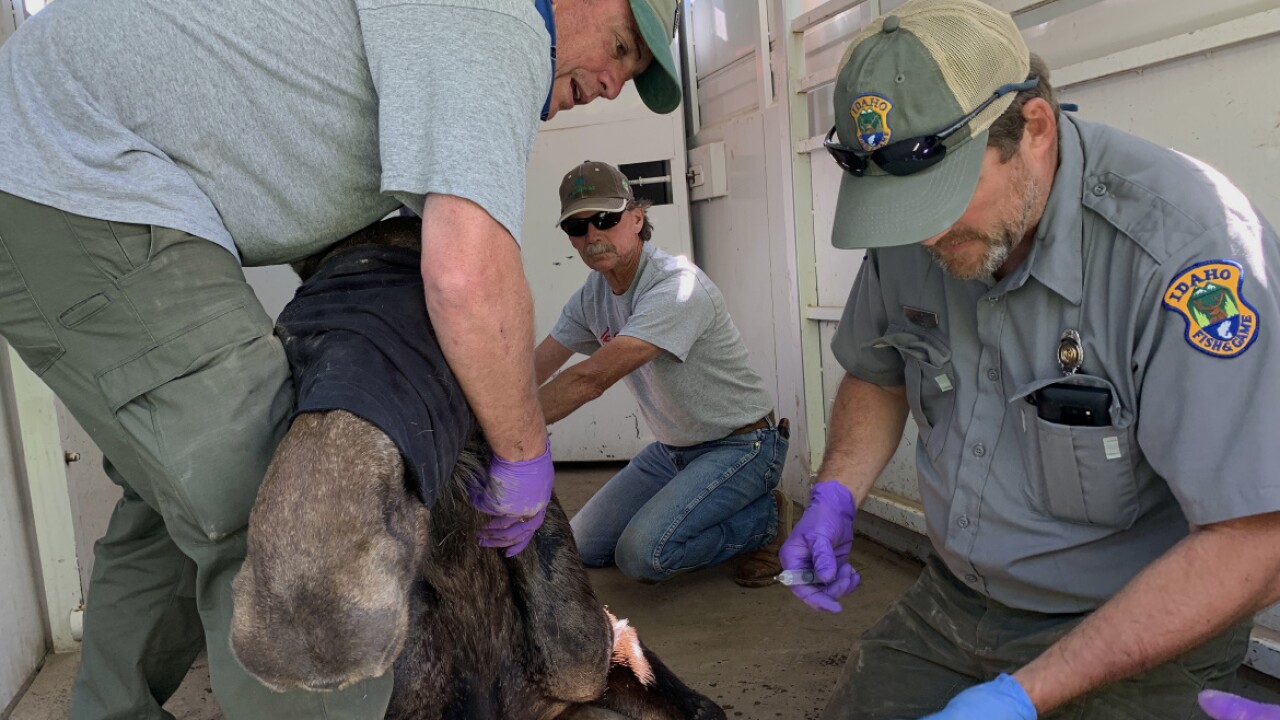 Over the last weekend of May, local Fish and Game officials were kept busy when two yearling moose, one in Twin Falls and the other in Heyburn were found roaming in city neighborhoods. Local residents began reporting moose to area law enforcement, who worked alongside Fish and Game to locate and secure the areas to ensure public safety. Moose, even yearlings, are very large animals, and when stressed can be quite unpredictable.

Initial reports of a young bull moose in the Twin Falls area began to come in on Thursday, May 28. Fish and Game began to monitor the moose, as it moved north through agricultural lands. On Saturday evening May 30, the moose quickly moved into a residential neighborhood on the east side of Twin Falls where Fish and Game made the determination to dart the young bull and move it back to the South Hills, where it probably began its cross-country journey.

Staff from the Magic Valley Region monitor a yearling bull moose shortly after being darted.

Darting of wildlife is a dangerous undertaking since there are a number of risks associated when using anesthetizing drugs. Decisions to dart an animal are not taken lightly. Chemical immobilization of wildlife can be hazardous to the animal, the team responsible to dart an animal, and the public. Anesthetizing drugs are potentially dangerous to the darting team and the public since a person accidentally exposed to some of these drugs could kill them.

Yearling bull moose loaded into a horse trailer for transport to the South Hills, south of Twin Falls.

The second moose, a yearling cow, was first detected along I-84 east of Burley. Local law enforcement was very effective at keeping the moose from crossing over the interstate. The moose then moved back towards the town where it was found in Heyburn. Fish and Game staff were able to dart the moose and move it to good moose habitat north of Carey.

Magic Valley Region staff and Commissioner attend to a yearling cow moose prior to transport to Fish Creek, north of Carey.

A moose simply being in city limits does not always mean that it needs to be relocated. Each instance is thoroughly evaluated by Fish and Game staff to determine:

If residents find themselves in close proximity to wildlife, such as a moose, they are encouraged to: