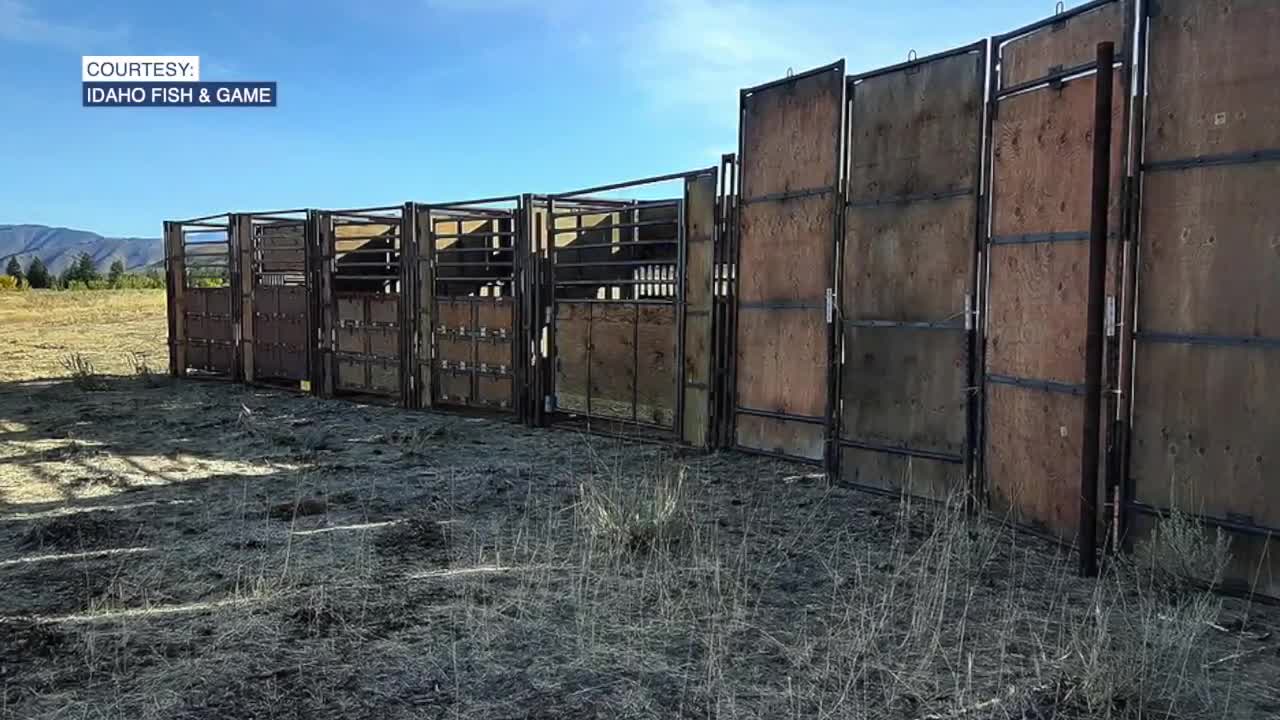 This week the Idaho Fish &amp; Game set up a trap and attempted to corral elk cows and calves into a pen using a helicopter and a crew riding on motorcycles and ATV's.

LITTLE CAMAS, Idaho — The Idaho Fish & Game moved 16 elk out of Elmore County because the herd is too large, and the elk are damaging agriculture in the region.

This week the Idaho Fish & Game set up a trap and attempted to corral elk cows and calves into a pen using a helicopter and a crew riding on motorcycles and ATV's.

The goal was to remove 70 elk from the heard near Little Camas, but this mission proved difficult, and the Idaho Fish & Game herded up 16 elk.

"These elk have been pretty intensely managed for the last four years, and to be blunt, they are pretty caging," said Mike McDonald of the Idaho Fish & Game.

This effort marked the final step in a three-pronged approach the Fish & Game took in 2020 to slow down elk depredation.

The first step used non-lethal methods in a process called hazing, where officials made noise and tried to scare off the elk with rubber bullets.

"We have killed 50 percent fewer animals this year at two different properties than we did in 2019," said John Guthrie of the Idaho Fish & Game.

The Idaho Fish also used a method called sharpshooting where they attempted to pick off elk that wandered onto farms during the night, and hunting has also been used as one of the solutions.

There have been nine hunts on private land in 2020 to lower the elk population in this region, but some landowners won't allow hunters access.

"To say there is no access is not true," said McDonald. "But the landowners do regulate access to their private property."

It is also an expensive problem, one that the hunters and anglers help pay for with depredation fees.

Fish and Game says based on the success of their efforts to prevent depredation, they're projecting this year's costs to be much lower, although they won't have an official number until later in the year.

But it is also expensive to capture elk and move them onto private lands where they can be hunted, but trapping the elk only got 15 cows and calves and one bull.

"In some ways, I wish they would have stampeded, but they didn't," said McDonald. "We would start with a group of 50 elk, and by the time you got them close to the trap site, we were lucky if one or two elk remained."

But on the flip side, this tactic can be dangerous for both the elk and Idaho Fish & Game personnel.

In 2002 IDFG trapped 170 elk, but 55 elk died in the process, this week there were no injuries to the elk or anybody working for the Idaho Fish & Game.

The Idaho Fish & Game tagged the 16 elk, put on radio collars and transported the elk to unit 34.

They dropped them off in Bear Valley about 40 miles west of Stanley.

"They were released on public property, we checked radio collars this morning, the elk have moved about a mile from the release site," said McDonald. "They are up on a ridgeline, and everybody seems to be doing fine."

The Idaho Fish & Game told us October wasn't the best time to trap elk, but they did it at this time because they knew for sure the elk herd they were trying to capture was responsible for depredation.

They told us they couldn't do it earlier because they didn't want to overheat the elk in warmer temperatures.

The Idaho Fish & Game is considering trying trapping again in 2021, they would plan to do it in late winter or early spring, but they don't know for sure if they will try it again.

That could also depend on the cost of this operation weighed against the benefits of less damage done by elk, but the cost won't be known for a while.