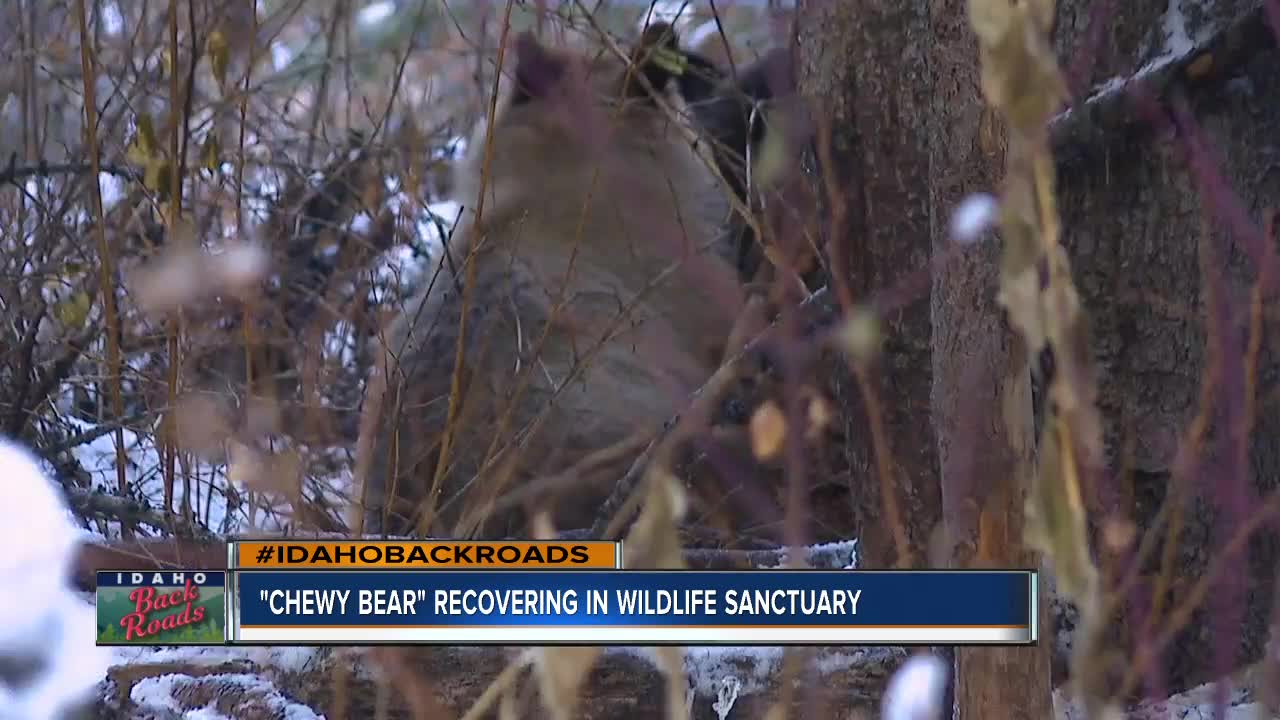 MCCALL, IDAHO — A few miles outside of McCall, up the icy Lick Creek Road, is a sanctuary where four black bear cubs are waiting for spring, including one you may recognize. Two months ago, Charles Erickson found him lying in the snow, nearly lifeless.

"It barely could move because it was starved half to death," Erickson told us in October. "I noticed that its gums where pure white and its tongue was pure white, so it was obviously dehydrated."

So Erickson took the bear to Boise, where he gave it cat food, water and even bottle fed it. And he and his kids also gave the sickly cub a name.

"His name was Chewbearica, Chewy for short," Erickson said.

Erickson was emotional on that day, because Fish and Game officers had just confiscated Chewy, and he was afraid they would euthanize the cub.

Instead, Chewy was taken to the Snowdon Wildlife Sanctuary. But his recovery was anything but certain.

"We were pretty concerned when he first came in, and that's mainly because he wasn't interested in food," said rehabilitator Mary Evers. "And bears tend to be very food-driven animals, so usually when they don't want to eat, that's a very bad sign that, you know, it might not work out."

Rehabilitators treated Chewy's injured leg, and encouraged him to eat, drink and grow stronger. One breakthrough led to another, and this week we witnessed one that hadn't happened yet.

"This is the first time I've seen Chewy and another cub kind of socialize, so that was pretty cool," said Evers. "It kind of helps them so they're not just socializing with people, so you know, they're hanging out with other bears and they're seeing them. And they're like, okay I'm a cub, I'm a bear."

Chewy and his new buddy are two of four bear cubs wintering at Snowdon. The other two are tucked away in natural dens ready for a long winter's nap. The dens are part of a very carefully designed sanctuary designed to mimic what they will find in nature.

"So this gives enrichment for the cubs, or something for them to play with and kind of munch on," said Evers, pointing at a deer carcass. "And then it's something they're probably going to be encountering in the wild too, so as you can see in our two acre enclosure, it's mimicking what they're going to be released back into. So they're climbing trees, in spring they're foraging on huckleberries, they're doing all of the things wild bears should be doing. And so that's why it's so important that all enrichment should be natural."

And all of that enrichment seems to be working for the four cubs on the two acre facility, including the one that has become known to many as "Chewy."

"When he was coming in he was very lethargic, not eating, limping, just very limited mobility at all," said Evers. "So exercising him in a smaller pen and working up his appetite to where he eats on his own. Now you saw him, he scaled that tree just fine, so we think after a full winter here he should be ready to go in the spring, so we're very optimistic about that."

Even though Chewy and his new buddy are not brothers, they will be released into the wild together next spring.