Out & About: Good Morning Idaho takes on Pickleball 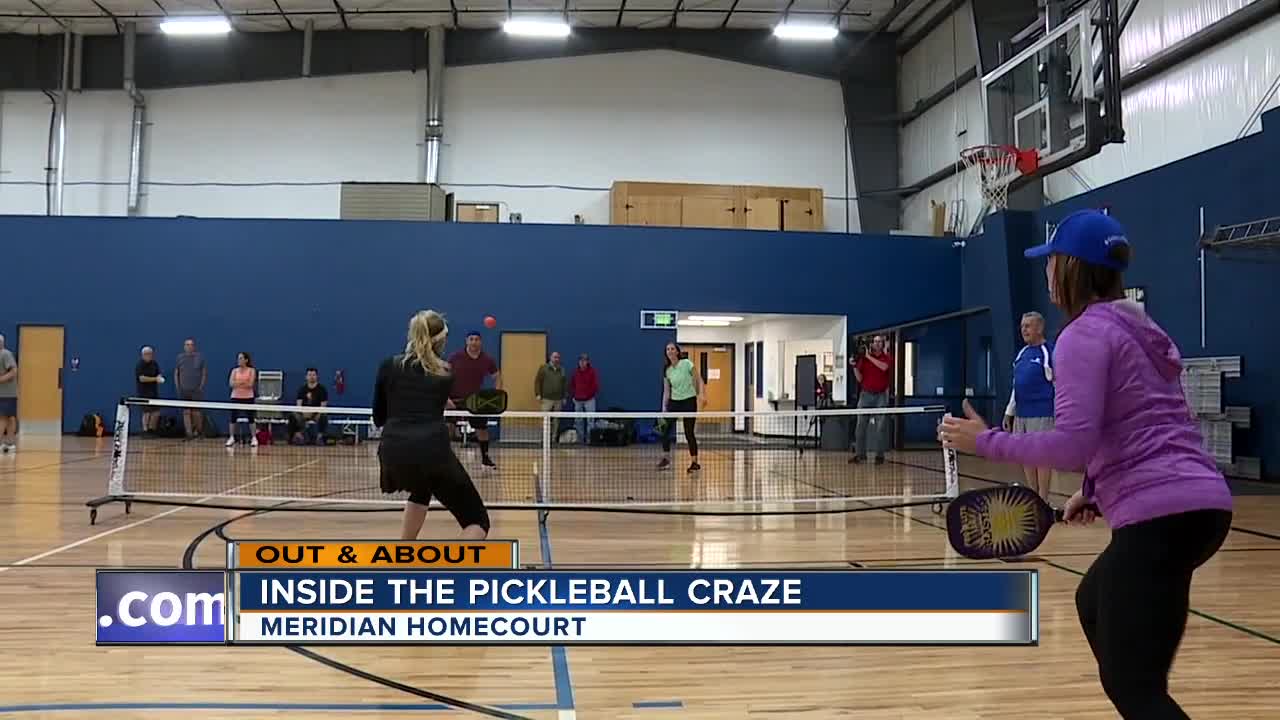 Out &amp; About: Pickleball

MERIDIAN, Idaho — It's the craze that's sweeping the nation: Pickleball!

The paddleball sport combines tennis, table tennis and badminton. It started in the 1960s, but has seen a major popularity boost over the last decade. That popularity isn't just in one area--there are national and world pickleball associations as well as local associations you can join.

Shelly Houston with Meridian Parks and Recreation says they've seen a huge increase in participation just in the last year and a half.

"Pickleball has been enjoying incredible popularity, especially among seniors, but really with people of all ages throughout the Treasure Valley and the nation," says Houston.

Pickleball features two to four players using solid paddles made of wood or composite materials. They hit a perforated ball that resembles a Wiffle Ball. Rules are similar to tennis, while court dimensions and layout might remind you of a doubles badminton court. Only the serving side can score a point and play ends when one side commits a fault. That could mean not hitting the serve into the opponent's diagonal service court, not hitting the ball beyond the net, and hitting the ball out of bounds.

Pickleball has a dedicated fan base at Meridian Homecourt. The facility opens at 7 a.m. each day with a few games starting at that time. By 8:30, the courts are filled with athletes and their paddles. The courts are split between three sections--beginner, intermediate and expert--and they are available on a rotating basis.

Players tell us they love the sport because it's a great equalizer since everyone of all ages can hit the court.

"It started out in retirement communities only and then kids started getting involved. Kids started really enjoying it. They used to teach it in schools around here years ago," pickleball player Nick Leach explains.

Leach and his wife Tami are pickleball instructors and competitors. He says having a tennis background will help prospective players, but even those without that background can find themselves becoming a pro in no time.

Other players tell 6 On Your Side that pickleball is a way to socialize and help them maintain a healthy lifestyle--and their competitive edge--as they get older.

"It's moving--it keeps you moving, and it's a good competition when you want it," says Bud MacLennan.

MacLennan picked up the sport a couple of years ago and served as the unofficial coach for the Good Morning Idaho team during their recent visit to Homecourt YMCA. He also emphasized that pickleball truly is a sport for everyone.

"Oh, it's great fun, great fun. The best part was they wanted to learn, so it was great fun just teaching them how to play some pickleball," MacLennan says. "It's a great, competitive sport. I've had a lot of ladies teach me a few things on the court."

"Younger people can play with older people. Men can compete against women because it's not really a power game. It's more finesse," Leach says. "I would encourage people that are home, that are doing nothing, to come on out. Male, female, weight, height doesn't matter."

By the way, who were the winners of the GMI game? Frankie and Rachel over Matt and Jillian!