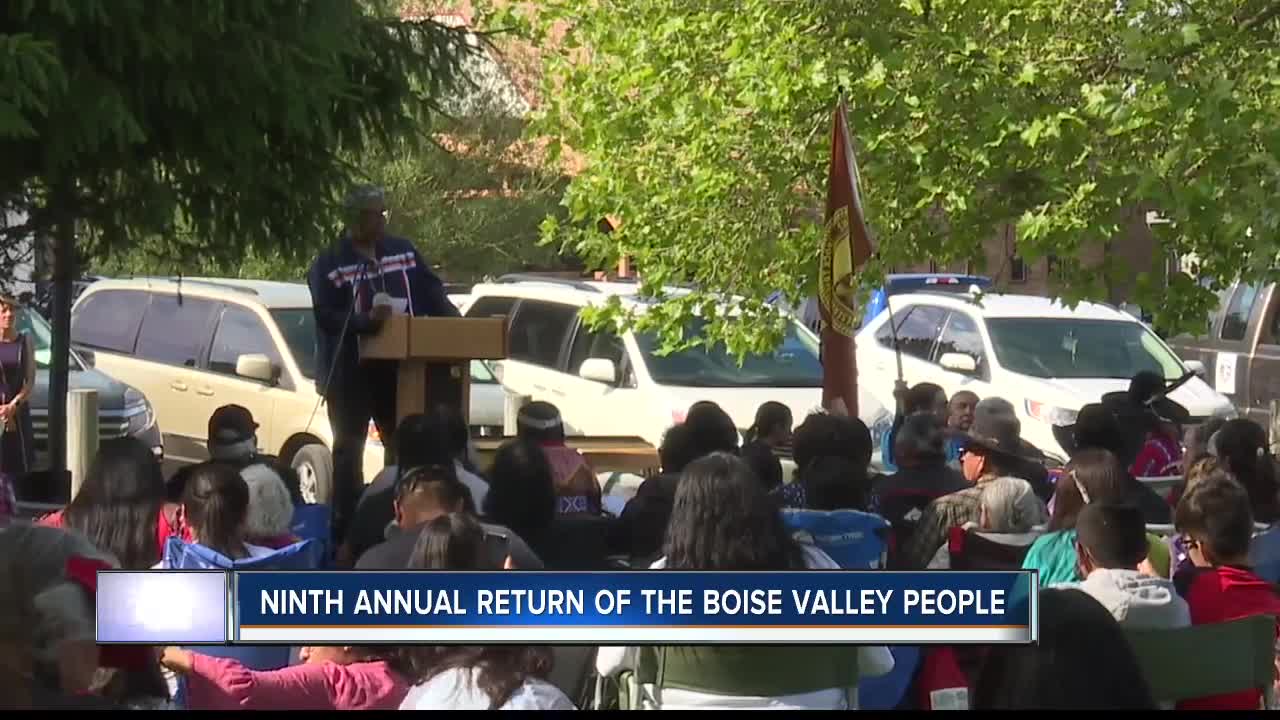 BOISE — Mayor Bieter and the chairman of the Shoshone-Paiute tribes renamed and rededicated Quarry View Park, renaming it Eagle Rock Park, the historical name for the park among indigenous people, and renaming Castle Rock Reserve to Chief Eagle Eye Reserve in honor of the Boise Valley tribes.

"A lot of our ancestors remains are throughout this valley, and in particular they're buried along, below Eagle Rock," said Lori Edmo, member of the Shoshone-Bannock tribe from Fort Hall, Idaho.

While the Shoshone-Paiute tribes were forced to leave the place they called home nearly 150 years ago, the Boise Valley has never completely been removed from the people who were here originally, "If you will notice on a lot of the streets, they're named after our people. Shoshone, Bannock," said Edmo.

At this year’s ninth annual Return of the Boise Valley People event, we had the honor, along with the chairman of the Shoshone-Paiute Tribes, to rename and officially dedicate Eagle Rock Park and Chief Eagle Eye Reserve in recognition of the Boise Valley Tribes. pic.twitter.com/iLo2rCZrMs

It’s the foundation for a friendship between native Boise Valley tribes and Idahoans in the making for nearly a decade. This year is the ninth annual Return of the Boise Valley People gathering. There, tribes come together to share stories and remember their ancestors who were removed by soldiers in 1869 when silver and gold were discovered in the Boise Valley.

"You're not gonna read about it in history books because it's written by white people, and our history is oral, much of it," said Edmo.

Because it was the U.S. military who removed the tribes 150 years ago, it makes the partnership even more special, helping identify cultural sites on the training area in Ada County.

"We work directly with the five tribes that claim sovereign rights to the area," said Jake Fruhlinger, Cultural Resources Manager for the Idaho National Guard.

Jake Fruhlinger works with the Idaho Air National Guard, focusing on tribal outreach. To date, he says they have done archaeological surveys on 150-thousand acres of military land, and in those surveys, identified nearly 400 archaeological sites from the Boise Valley tribes.

"When gold and silver were discovered, they were actually marched out by the military, so we've really done a lot to try to build those relationships back up," said Fruhlinger.

And when archaeological sites are identified, the Idaho Air National Guard gives the location of that land to the tribes for preservation of their own ancestors history, helping in those tribes’ efforts to eventually build a cultural center in Boise.

For more information on the Idaho Air National Guards efforts to preserve that land, click here .