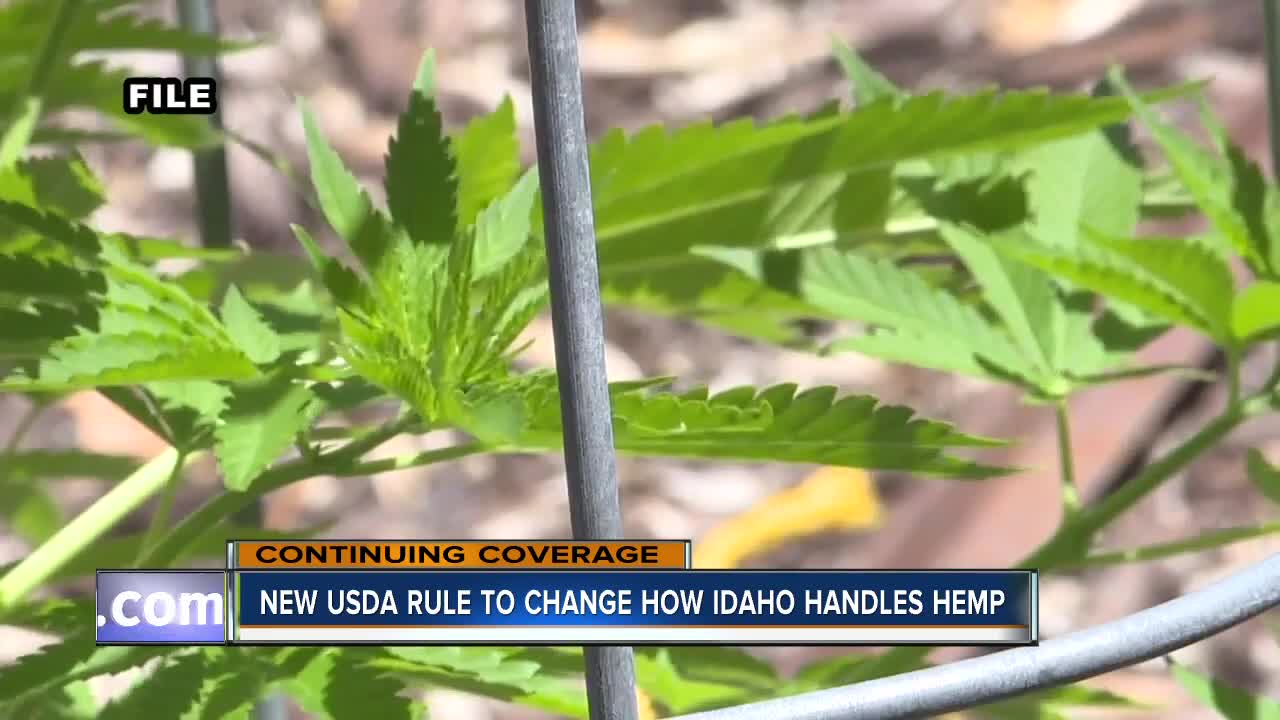 The United States Department of Agriculture is codifying a change in rules that will, in effect, establish hemp as a federally recognized crop in the United States and address regulatory concerns in the process.

BOISE — The United States Department of Agriculture is codifying a change that will, in effect, establish hemp as a federally recognized crop in the United States and address regulatory concerns in the process. The new administrative rule will change how the state of Idaho handles hemp production and transportation through the state.

In a release on the USDA website, the new rule will be officially posted later this week, but a draft of the new rule has is live.

Secretary of Agriculture Sonny Perdue makes the announcement of the new rule in a video on the page.

At USDA, we are always excited when there are new economic opportunities for our farmers, and we hope the ability to grow hemp will pave the way for new products and markets,” said Secretary Perdue. “We have had teams operating with all hands-on-deck to develop a regulatory framework that meets Congressional intent while seeking to provide a fair, consistent, and science-based process for states, tribes, and individual producers who want to participate in this program.

Sonny Perdue, US Secretary of Agriculture

The State of Idaho still bans the production and transportation of hemp, but this new rule will address a lot of the concerns raised by legislators about hemp production. USDA will take the lead regulating hemp growers and production to ensure what's labeled as hemp is what a business claims it is.

This new rule, while encouraging for hemp growers or prospective people hoping to get into the business, doesn't change Idaho law, but may open the door to legislation in the upcoming legislative session to recognize the federal law and new USDA code and to create a plan for transportation of the crop in Idaho, or even its production here.

It is still currently illegal to grow hemp in the Gem State, but a spokesperson with the Idaho Farm Bureau said if the legislature "fast-tracks" it in this upcoming legislative session, it is possible that farmers could start growing hemp in Idaho as early as next year.

Cannabis has two species: hemp and marijuana. The defining difference? Hemp contains THC content of 0.3% or less. Licensed hemp producer Peter Koch of Whole Circle Farms has been growing it in Oregon.

"It can definitely be a cash crop if we have the infrastructure in place," said Koch.

As cash crop for Idaho? Maybe. But Koch says it would need to happen quickly.

"As we speak the price is declining because there is more being produced right now than what is in demand, even though the demand is growing tremendously," said Koch.

If embraced for production in Idaho, hemp could provide jobs and be used in plastics, building materials, cosmetics, and more.

"There are a lot of uses for it, and so from an economic standpoint, it will add to the economy of our state," said Representative Christy Zito, (R) Hammett.

In response to the new rule, Governor Little said:

We expected new federal rules to address the transportation of hemp across state lines. From the start, I stated that we need to be sure the production and shipping of industrial hemp is not a front to smuggle marijuana or other illicit drugs into and around the state. I am reviewing the federal rules closely with my team, and we are building a plan to protect the health and safety of Idaho citizens when the interstate transportation of hemp becomes legal under the new federal rules. The plan will be a stopgap measure to address this issue until the Idaho Legislature develops a permanent regulatory framework around hemp.

Rep. Zito, however, does not share the governor's concerns that the health and safety of Idahoans might even be compromised, because in order to keep their licenses, farmers are held to standards.

"By the time the hemp gets onto the truck, it's probably been tested more than once to make sure that it doesn't have levels of THC," said Zito.

Koch says the production of hemp is an explosive industry right now, but that he sometimes feels "handicapped" by the 0.3% THC threshold.

"It's very hard for us with the genetics we have today to accomplish that on a consistent basis," said Koch.

This year, he said, 50% of his hemp is going to waste because warm, wet weather caused mildew to grow on it, ruining it. He says the only way Idaho could profit, is if they have infrastructure in place to make otherwise unusable crops-- usable.

But the fate of that, lies within the statehouse when the hemp research and development act is brought forward again.

"But if everything's good with the bill, and it passes through the ad committee and gets approved on the floor, then it will make the way, so that our farmers can grow hemp," said Rep. Zito.

How this rule change will affect the current charges against a trucker who was pulled over while transporting hemp remains to be seen. Prosecutors dropped felony charges, but Elijah Watkins, the attorney representing Big Sky Scientific, the company transporting the hemp into Idaho, equates today's rule change as a type of vindication.

Big Sky is grateful and vindicated that the USDA opinion clearly supports what Big Sky has been saying all along and quite frankly, what Congress has said since 2018, that hemp can be transported through interstate commerce despite the state laws where the hemp might be traveling through.