Tiger Woods 'sore' and 'scraping it around' at the Open 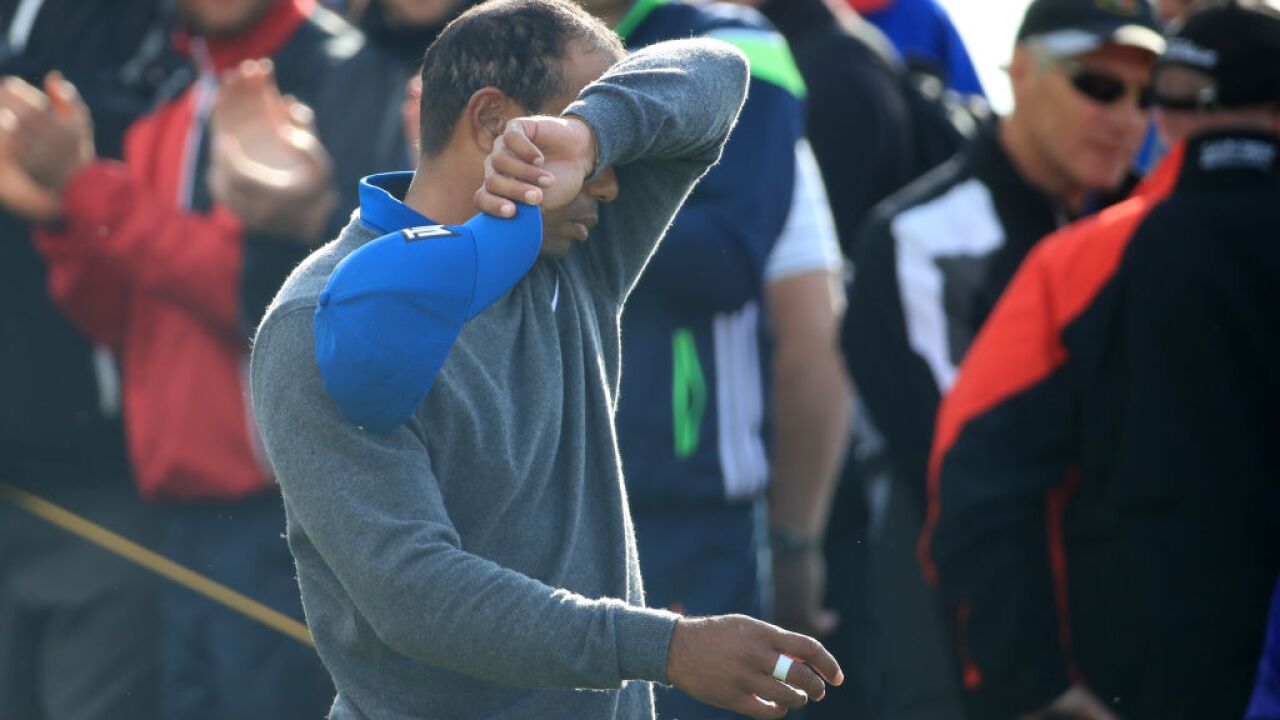 The rain dripped from the peak of his cap as another vicious squall hit Royal Portrush.

From beneath the brim, Tiger Woods pursed his lips and swung through the deluge.

The white ball soared into the cobalt sky, like a tracer round towards the left side of the seventh fairway stretching out below.

Woods had just bogeyed the fifth and double bogeyed the short sixth, but it was a day for weathering storms, both from the sky and from within.

The 43-year-old had earlier set social media ablaze after appearing to grimace following his opening tee shot on the first day of the 148th Open Championship.

His surgically fused was back the immediate concern, and a weary Woods admitted after carding a seven-over 78 he was "sore."

Woods was able to join in a search for playing partner Patrick Reed's drive into the wilderness on the seventh, but returning to his own shot from the left fringe, just yards from the straining crowd, he caught it heavy.

Disgusted, he tossed his club at the feet of caddie Joe LaCava and strode into the middle of the fairway to be alone.

Up ahead, further off line, Woods swung at his third but barely got it airborne as it scuffed forward over a dune in front.

Remarkably, Woods made a mess of his next shot, too. He went to smash his club on the ground but thought better of it.

Woods amassed a bogey six at the hole -- the same hole that cost his former nemesis David Duval a 14 -- to slide to four over.

He later admitted he was "scraping" it around.

"My warm up wasn't very good, I was having a hard time moving, just trying to piece together a swing that will get me around the golf course," he told reporters.

The former world No.1 appeared to have overcome his four major back surgeries to clinch that remarkable 15th major title and fifth Green Jacket at the Masters in April, but he is aware his body will not allow him to have such highs every time he plays.

"One of the reasons I'm playing less tournaments this year is to hopefully prolong my career," he said.

"I'm not 24 any more, life changes, life moves on. I can't devote the hours to practice like I used to. Those days are gone. I have to be realistic about my expectations and hopefully peak at the right time. I peaked at Augusta well, and hopefully I can peak a couple more time this year."

From the seventh Woods dropped three more shots before his first birdie of the day courtesy of a long putt at the 15th. Woods licked his finger and described a No.1 in the air to signify the first.

He made another bogey at the last, but quickly fronted up to discuss his plight with waiting reporters.

Woods said he was off for immediate treatment on his back, but vowed he would return for Friday's round. "I'll be there," he said.

He trails first-round leader JB Holmes 12 shots and is likely to be heading home early from Northern Ireland.