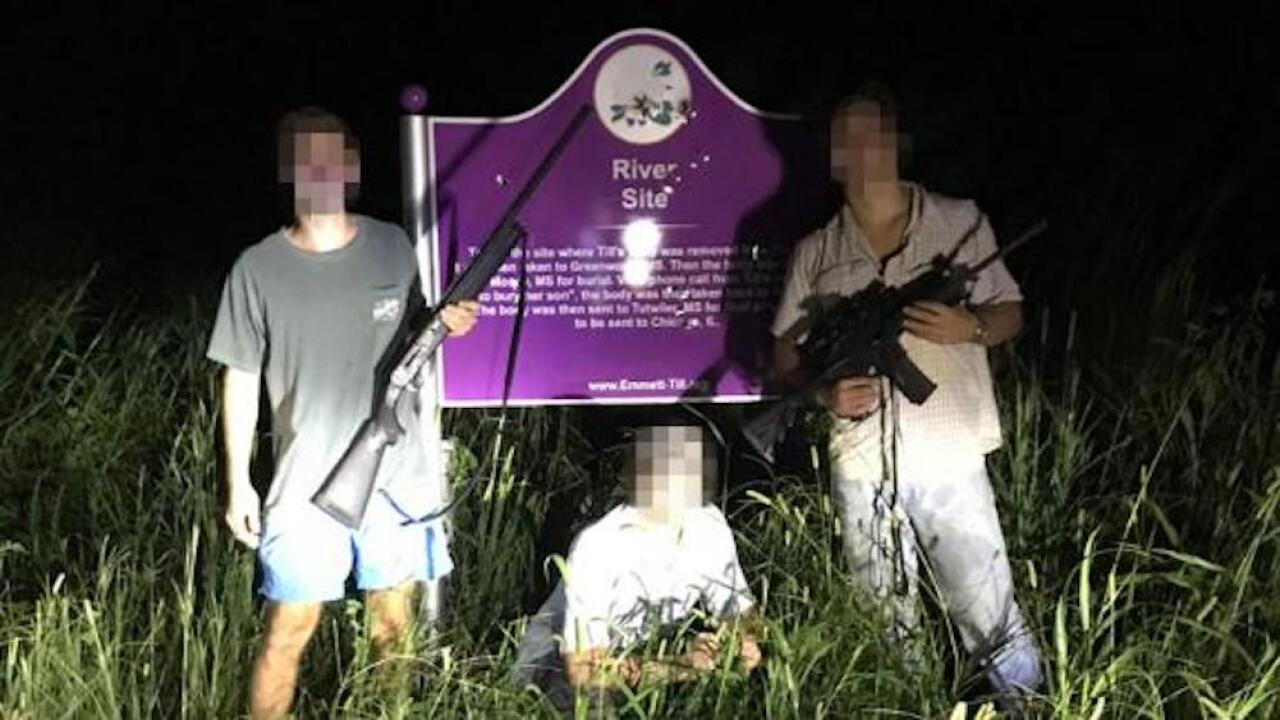 Three white University of Mississippi students have been suspended from their fraternity after a photo showing them posing with guns in front of a sign memorializing Emmett Till surfaced earlier this week.

The sign, which is posted outside Glendora, Mississippi, is there to commemorate the murder of Till, a 14-year-old African American who was tortured and killed in 1955 after accusations that he flirted with a white woman. He was shot in the head and thrown into the Tallahatchie River by two white men. His death became an important catalyst in the civil rights movement.

The students in the photo, obtained by the Mississippi Center for Investigative Reporting and ProPublica , were standing beside the sign. The sign appears to be riddled with bullet holes, but it's unclear whether the students were connected to the damage.

Deborah Watts, Emmett's cousin and co-founder of the Emmett Till Legacy Foundation, said she saw the photo Thursday and doesn't know who may have vandalized the sign.

"It marks a pretty solemn spot. This marks the spot where Emmett was shot, lynched and beaten," Watts told CNN. "To see them standing there, smiling, is disappointing, but not surprising."

The image was posted to the private Instagram account of one of the students in March, with the message "one of Memphis's finest and the worst influence I've ever met," the news outlets reported.

"When I think about that photo -- it's a motivator," Watts said. "It means our work is more important today than it has ever been."

CNN is not identifying the students while we attempt to reach them for comment.

School officials knew about the photo since March

Jesse Lyons, a spokesman for Kappa Alpha, said the students were suspended Wednesday after the chapter's leadership was made aware of the photo the night before.

"The making of the photo was unrelated to any event or activity of our chapter," the fraternity's Ole Miss chapter said in a statement. "The photo is inappropriate, insensitive, and unacceptable. It does not represent our chapter."

University officials had learned of the photo in March after they received a bias report through the school's office of student conduct, said Rod Guajardo, a university spokesman.

The university police later reported the image to the Federal Bureau of Investigation, which Guajardo said declined to investigate the incident because the photo did not pose a specific threat.

He said the university sees the image as "offensive and hurtful" but it does not represent a violation of the university's code of conduct.

"It occurred off campus and was not part of a university-affiliated event," he said.

"We support the actions made by the Kappa Alpha Order leadership in suspending the students involved, and we are aware that this decision is backed by its National Administrative Offices."

US Attorney Chad Lamar of the Northern District of Mississippi in Oxford told the Mississippi Center for Investigative Reporting and ProPublica on Thursday that information about the photo was referred to the Justice Department's Civil Rights Division for further investigation.

The sign has been vandalized on multiple occasions, and stolen at least once, according to the Emmett Till Memorial Commission -- the group responsible for the sign.

"Our signs and ones like them have been stolen, thrown in the river, replaced, shot, replaced again, shot again, defaced with acid and have had KKK spray painted on them. The vandalism has been targeted and it has been persistent," Patrick Weems, the group's executive director, said in a statement Thursday.

Weems did not discuss the photo or confirm whether the sign was damaged this year.

The first sign went up along the river in 2007. It was stolen the following year and was never found, Weems had said.

Eight years later, its replacement was riddled with bullet holes in multiple acts of vandalism. Last year, a third sign was put up near the river and was shot up 35 days later. A professor from nearby Delta State University found the sign defaced by bullet holes, Weems said last year.

A fourth sign -- a bulletproof sign -- is expected to be installed at the site soon, the group said Thursday.

"We believe it is important to keep a sign at this historic site, but we don't want to hide the legacy of racism by constantly replacing broken signs," the statement said. "The commission hopes this sign will endure, and that it will continue to spark conversations about Till, history, and racial justice."

What happened to Emmett Till?

The killing in 1955 shook the nation and helped fuel the civil rights movement.

Emmett had traveled to Mississippi from Chicago to visit his great-uncle when he was falsely accused of flirting with Carolyn Bryant, a 21-year-old at the time. Bryant and her husband, Roy, owned a grocery store in Money, Mississippi.

Days later, Roy Bryant and his half-brother, J.W. Milam, rousted the teen from his bed and ordered him into the bed of a pickup truck. They beat him mercilessly. Then they took his life by shooting him in the head.

To get rid of Emmett's body, his killers strapped a 75-pound cotton gin fan to his neck with barbed wire. That way he'd be weighed down when they threw his battered body in the Tallahatchie. It was found days later.

Bryant and Milam went on trial less than a month after Emmett's body was pulled from the river. There were witnesses who saw them. The men admitted they had kidnapped Emmett.

But Bryant and Milam were acquitted by an all-white jury. A year later, they confessed but double jeopardy laws prevented them from facing another trial.

Emmett's mother demanded an open-casket funeral and forbade attempts to hide his injuries. Gruesome photos of the boy's mutilated body spread across the globe, lending jarring visuals to the stories of violence and discrimination coming out of the South.

Emmett would have turned 78 on Thursday.