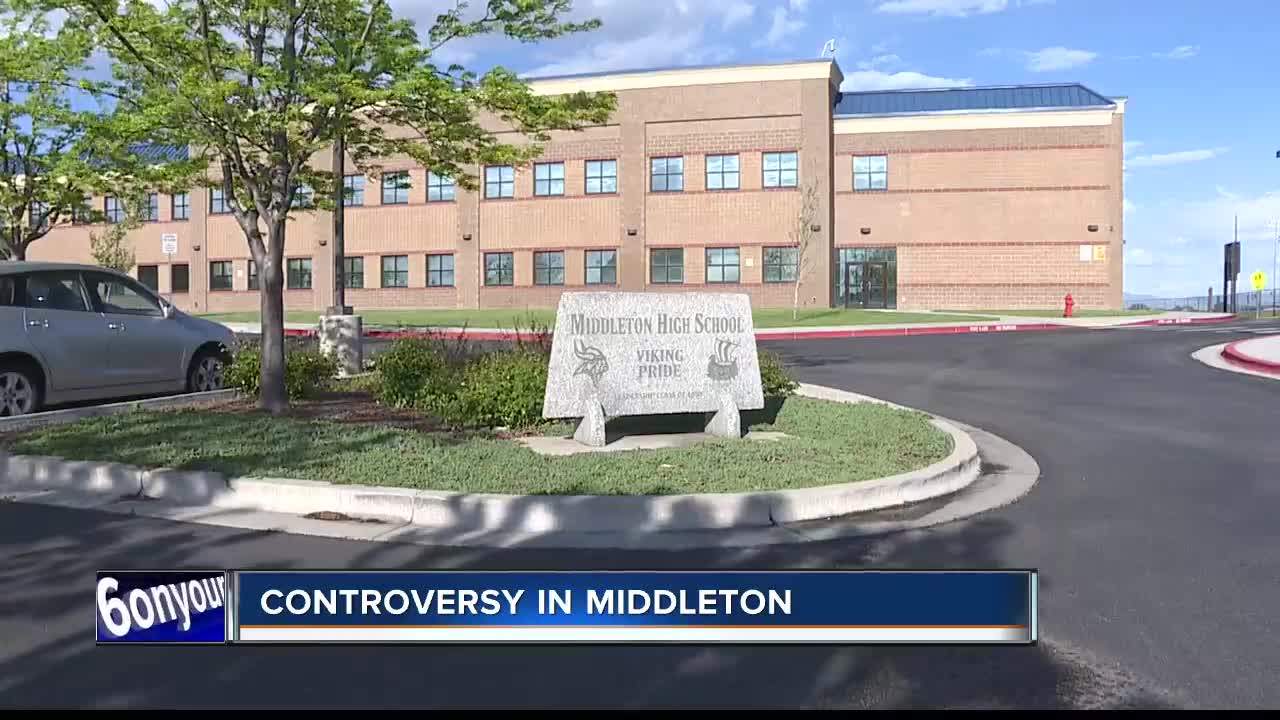 School board controversy in Middleton

MIDDLETON — There is controversy in Middleton tonight as parents and students rally around the high school principal, after the Middleton School Board decided not to renew his contract.

Now, uplifting signs and posters are spread throughout the school as part of an effort to help keep Middleton High School a positive place, during a time of uproar, following a meeting Monday night where the school board decided not to renew the contract of Principal Benjamin Merrill; a decision many students and parents don’t agree with.

Monday’s meeting was a loud one, as Middleton High School students and parents heard the decision of the board at the tail end of the meeting.

“It broke me down to tears,” said Shelby Hymas, a senior student at Middleton High School.

Parents say the contention between Dr. Merrill and the school board began last December, when parents raised money to gift a camera to Principal Merrill, for him to use on behalf of the school, to take pictures of students at sporting events and school activities. What parents and Dr. Merrill were unaware of, was a school policy not allowing him to accept a gift over a certain amount of money.

“My understanding he wasn’t aware of that policy and he returned the camera,” said Ray Moore, parent of two students at MHS.

But that wasn’t the end.

“He was investigated on the matter on more than one occasion, and that started kind of a systematic harassment of him,” said Moore.

“They authorized an investigation into this matter that wasn’t supposed to exceed $5,000, it’s currently at $39,000 and still growing,” said Moore.

A big chunk of change, confirmed by public record requests. And now, a petition is circulating, in an attempt to recall three of the four members of the school board.

“I don’t feel like they’ve displayed good leadership, I don’t feel like they’ve made good decisions, they don’t seem to be too interested in following the law,” said Moore, who said some parents are concerned that open meeting laws have been violated by the school board. “We’re going to try to recall these trustees, but this is all about bringing back Ben," said Dave Morgan, parent of a student at MHS.

But many parents are rallying behind a fourth member of the school board, Marianne Blackwell, who made this statement: “We as the board have never reviewed the full investigation report, something I have requested multiple times to review and have been denied access to. The full investigation report was never presented to Mr. Merrill nor was he given an opportunity to rebut any information contained in the report. I disagree with the board majority’s decision to not renew Mr. Merrill’s contract. As public officials I feel we have clearly gone against the wishes of the public we serve who want to see Mr. Merrill continue as principal..”

Now, a student petition is now circulating, “It’s basically just to keep Mr. Merrill in our school and to show everyone how much we love and adore him,” said Shelby Moore, a junior student at MHS.

Principal Merrill is one that many Middleton High Vikings say has changed their school for the better.

“I honestly could not tell you my last principals name. I don’t know what he looked like,” said Hymas.

“Row the boat, that’s our saying, and we’re now rowing the boat for him," said Shelby Moore.

Students plan to present their petition to the school board next Monday at the next board meeting, where they hope the board will decide to re-sign Principal Benjamin Merrill’s contract.

The school board has now responded with their statement, courtesy of Tim Winkle:

The Middleton School Board Trustees held two executive sessions over the past few weeks. The Board has been working to understand what is the best course forward, given the events of the last few months.

The Board was advised by its legal counsel to not directly investigate Dr. Ben Merrill’s accusations. Legal counsel took the lead as the Board would potentially have to take actions with the results. The reference to that advice can be found on the Middleton School District website.

Additionally, the website contains the Board’s statement issued on April 25 and includes three conclusions from the investigation.

Given Dr. Merrill’s popularity, the Board chose to move slowly in trying to decide the best path forward for the school district.

The Board was planning on meeting with Dr. Merrill but in the end, Board Chairperson Tim Winkle was reminded about the Board’s responsibility to not investigate but to digest the results of the investigation and either accept or reject Superintendent Dr. Middleton’s recommendations on the personnel report.

That vote was 3-1 Monday night after executive session. Given the limited information the Board can release on any personnel issue, the reaction from the community was expected.

The level of rancor, however, was beyond expectation and a trustee needed a police escort to her car.