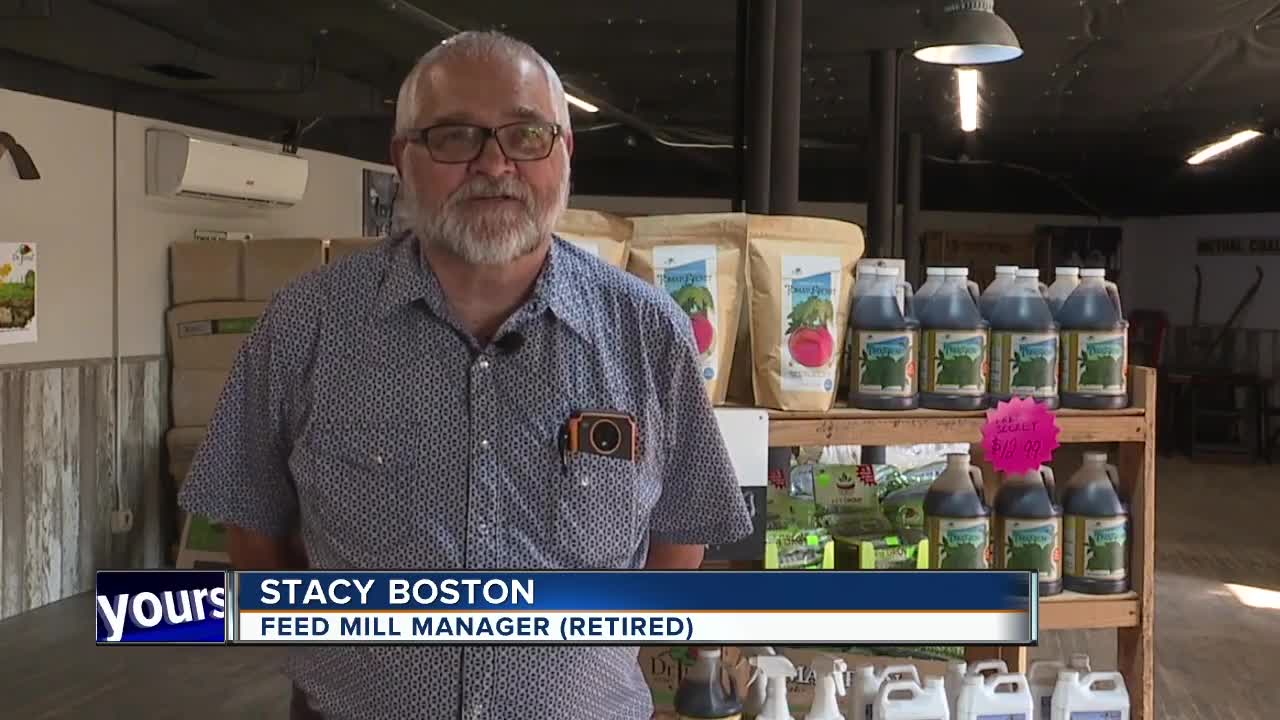 MERIDIAN, Idaho — Stacy Boston thinks a key reason he got the job at Meridian’s iconic Feed Mill back in 1975 was that he didn’t change jobs frequently. That’s an understatement. Boston, the now-officially-former manager of the mill, retired on Tuesday –-after being with the company 44 years.

A day-long celebration honoring Boston many years of service was held at the Mill, in which Boston visited with family, friends and the staff in reminiscing about the mill’s history.

Boston has known all five generations of Zamzow family, who owns the mill and the thirteen Zamzows Lawn, Garden and Pet stores throughout the Boise area.

He remembers holiday parties with Carmalita Zamzow, who founded the company along with her husband in 1933. The “Grandma Z” pet food at Zamzows is named in her honor.

Boston also has worked with Carmalita’s sons Bernard and Stanley, who ran the company from 1945 to 1976; Bernard’s sons Jim and Rick, who succeeded them; and Jim’s children, Jos Zamzow and Callie Zamzow, the current management team. Jos and Callie, who was born the year Boston started at the mill, are the fourth generation to run the operation. Jos and Callie’s children will likely be there soon.

The Feed Mill, with its iconic tower and signage marking the Meridian historic district, was built way back in 1911. Today, it produces hundreds of different products. It became the first organic feed mill in southern Idaho three years ago, and will have its third organic chicken feed on the market by next spring.

Boston’s involvement started when he applied at the mill after working a swing shift in a sugar beet factory. He decided that swing shift hours were incompatible with a good family life.

“I started at one end of town at 8 a.m. Monday looking for a job, and I reached The Feed Mill about 9 a.m. I filled out an application and started to leave. As I was walking out the door, the manager asked me when I could start. I told him I could be there at 8 a.m. tomorrow. He said, ‘I mean, how soon could you start today?’ I said I needed to go home to change clothes and I could be back by 10 a.m. I think he like the fact that I had been working since I was 16, and I had only worked three places in eight years,” Boston recalled.

“That was Dec. 17, 1975. The holiday party was a few days later, and I wasn’t planning to go because I really didn’t know anyone. Bernie Zamzow said my wife and I needed to come, so we did. He gave everyone an envelope with a bonus. When I got home and opened the envelope, there was a $50 bill. I took it back Monday morning and said there must be a mistake because I had only worked four days. He said, ‘Don’t worry about it. It’s an investment in my future,” he added.

“That’s the kind of company the Zamzows run, and I’m proud to have been a part of it for so long. They have always treated me like family. I have tried to treat the mill like I own it, too. It’s not only their bread and butter; it’s my bread and butter, too,” Boston said.

He remembers another holiday party when “Grandma Z” sat with The Feed Mill staff, as she usually did. “I think she liked us because we were fun. One year, we were a little rowdy -- not drinking, but telling jokes and laughing. When I came in Monday morning, someone told me not to be surprised if the management got a call from Grandma Z. Indeed, she did call. Her message was that it was ‘the best holiday party’ she had ever been to,” Boston recalled.

“I like The Feed Mill today because the products are complex. Some have 50 or 60 ingredients in them. Feeding a horse an ounce a day of a nutritional supplement with a few milligrams of the right trace minerals can make a huge difference in the horse’s health. We make our products from start to finish. Then we have interaction with the customers who use them, and that makes the job especially rewarding,” he said.

“Stacy treats the mill like it is his own. He knows how to do every job there is, and that is why he has been so successful as manager. We will miss him,” said owner Jim Zamzow.

Boston’s retirement plans include fishing and traveling to visit relatives in Oregon and Nebraska. He’ll also continue to raise chickens, which has made him particularly partial to the chicken feed produced by the mill.

And the one nice thing about being retired? “The first day, I’m going to get up the same time I always do, I’m going to fix my breakfast, I’m going sit out on my patio and watch the guys going to work. And I’ll just think, ‘Hey, I’m not working today. I’m retired,’” Boston told us.