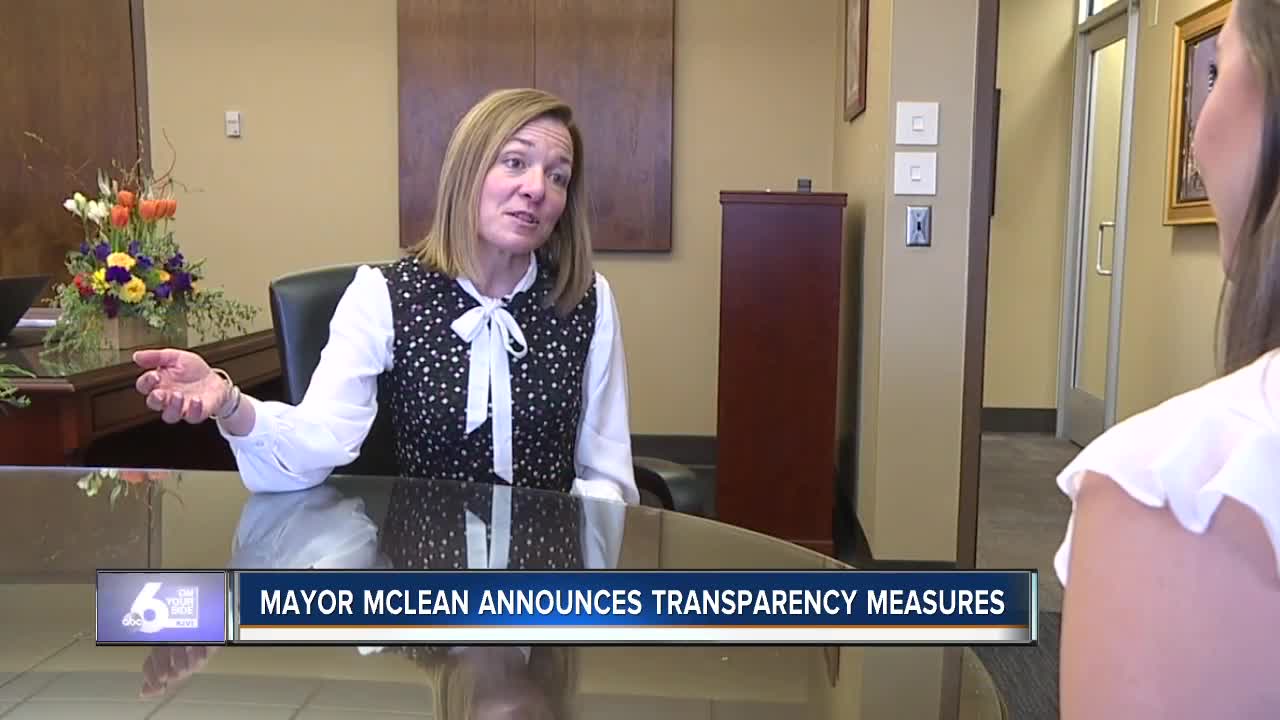 Newly-elected Boise Mayor Lauren McLean Thursday said she is working to create a more open and transparent city government, one of her campaign promises during her race with former longtime Mayor Dave Beiter.

BOISE, Idaho — Newly-elected Boise Mayor Lauren McLean Thursday said she is working to create a more open and transparent city government, one of her campaign promises during her race with former longtime Mayor Dave Beiter.

In a news release, McLean said, “Boiseans voted overwhelmingly for a change in style and tone, embracing a vision for a transparent, accessible, and accountable City Hall. I want to honor the spirit of that vote, and commit to you in this first week some changes in how we’re doing business. I’m proposing a slate of changes to increase my accountability and accessibility to every person in Boise. You voted for more open doors for City Hall, and this is my answer.”

◦Public Online Calendar: “My calendar will be available online for anyone to see. Residents deserve to know who their mayor is meeting with, when, and why,” said McLean. "We will have my schedule posted online so people understand who the Mayor’s meeting with.”

◦Open Door Policy: “I will maintain an ‘open door’ policy. If a (Boise) resident drops in and would like to talk, I’ll do so whenever available.”

◦Direct Text Line: “I will continue to provide a dedicated text line to citizens. Residents value an easy way to get in touch, and I want to maintain that,” she said.

◦Monthly Listening Sessions: “I will also continue my informal, unstructured, open listening sessions, moving through the city over the course of the year," said McLean. "Our city’s growing, and I know it’s possible to do it in a way that holds true to who we are — that welcomes new people."

◦No Corporate Money: “As a candidate and now as mayor, I will not accept corporate or corporate PAC donations,” McLean stated. "Whether that be donations of time, of money, or even endorsements from city employees.”

◦No Soliciting of City Employees: “Additionally, I will make changes to our ethics rules prohibiting the mayor from soliciting donations from City of Boise staff. No employee should ever feel like their job is dependent on supporting the mayor politically.”

◦Election Reporting: “Elections reporting shall move from the City Clerk to the administrator of City Elections, the Ada County Clerk. It’s unreasonable to expect the City Clerk and staff to enforce elections compliance for the mayor, city council, and PACs supporting them.”

◦Press Availability: “I will be available for in-person, unprogrammed bimonthly (twice a month) press roundtables with local reporters. The press are an essential part of public accountability, and I appreciate their service to our community,” the mayor pointed out.

So for Boise residents who have ever felt like marching into the Mayor's office and telling them directly how you feel -- now you can.

"If I'm available, and somebody wanders in, I’m happy to pop out and have a conversation," said McLean in an interview. "I think it’s really important that we hit the ground running and we do everything we can to make true on the conversations and promises we had during the campaign, because the public made it clear on election day that they wanted new leadership that’s more transparent and accessible.”

These changes come after some contentious moments where city officials' transparency came into question, like when former Mayor Dave Bieter announced a decision to install facial recognition technology in City Hall without bringing the public in on that decision. After criticism -- (from McLean included) -- he later revoked it.

“You have to ask yourself when making decisions, 'Is this really a small decision, or is this a big decision?' And if it impacts the public in any way -- especially when it comes to civil liberties -- that’s a big decision. And so, that’s why we disagreed on that issue when it first came out," said McLean.

Additionally, election results spoke strongly of Boiseans' desire for added oversight when Props 1 and 2 on the library and stadium project vote passed with a vast majority.

“I’ve said all along: the stadium wasn’t a priority of mine. I have no intention of asking the public to spend city dollarr on a private stadium. The library is really important for our community, but, we have to have a new conversation about what the public wants, what they expect, and come up with a proposal -- not immediately, but over time, that I believe will be celebrated over time and not so controversial," said McLean.

McLean said she is working with city staff to accommodate and integrate these changes now, and she expects to have them fully implemented by February.

“Additionally, in the coming weeks, I look forward to sharing information about property taxes, budgeting, affordability, and the work of my six citizen committees. I remain steadfast in my commitment to tackling the issues Boiseans care about most,” she added.