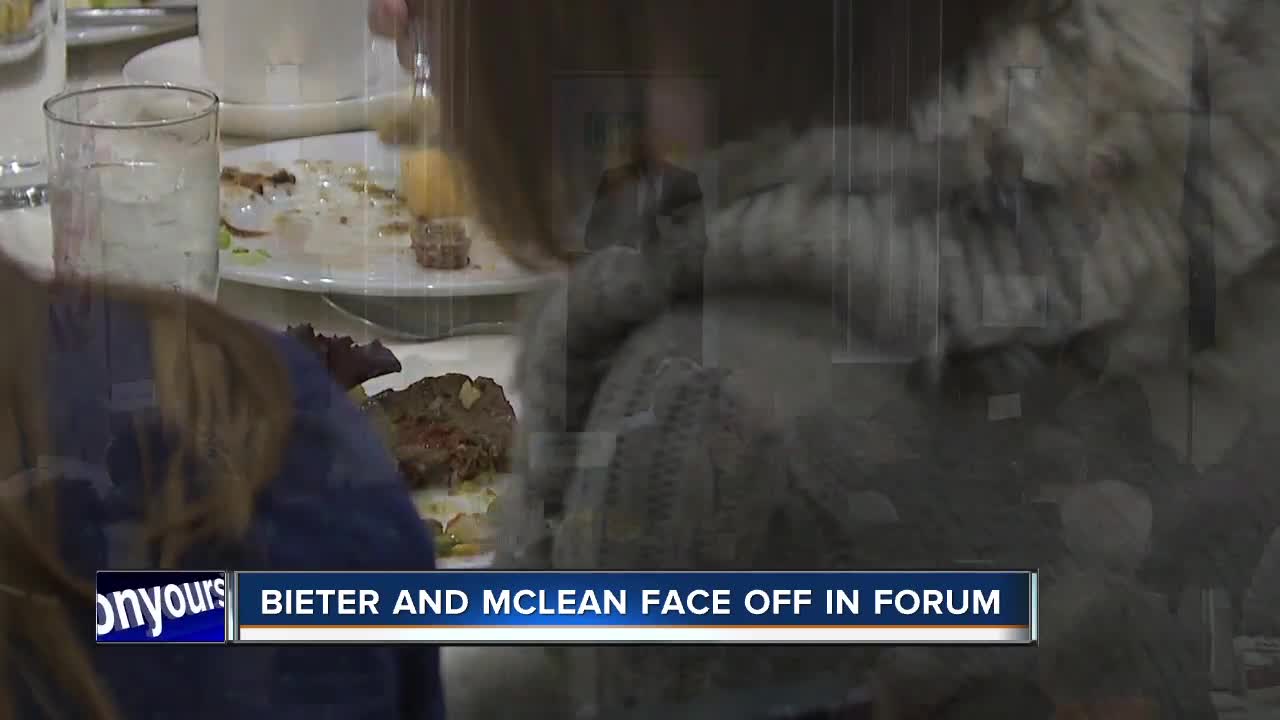 After Boise voters reinforced the need to start fresh with an overwhelming passage of Props 1 and 2 on the library and stadium projects, Bieter announced Monday he will recommend to the city council an immediate reset to the library.

When it came to the "vote on a vote" items, the voice of voters was clear, with Prop 1 on the library passing with 69% of the vote and Prop 2 on the stadium with 75% of the vote.

But at this head to head forum, that topic sparked heated debate between he and McLean.

"They want in on this project, God bless you. Now you're engaged. You weren't before. We will re-engage you, and we'll get it right," said Bieter.

"I reflected on that," said McLean. "And stand by my decision that this is not the right time to do this for Boise. We have to address affordable housing and transportation with our dollars."

aA roughly 330 people watched on, accusations and defenses were thrown around by both candidates at a rate higher than any other forum in the election season thus far.

"This has always been about a legacy project," said McLean.

"Woah, we can't let that go," said Bieter. "My legacy is my daughter. And that is humbling and difficult and all you parents out there know that."

"There is no comparison between having a debate about a large-scale building and the importance of our children," replied McLean.

Commitment to transparency and community engagement were topics both candidates held steadfast in supporting with fervor.

"Do you think you do a good job of listening to people?" asked the moderator.

"I started-- I listen all the time. I didn't start six months ago. A couple months into when I was elected, I started doing Saturday office hours," said Bieter.

"When I became council president, I was hearing from people that they wanted to engage with us in ways that weren't so conflict-ridden... so we started town halls," said McLean.

The incumbent mayor and council president will face off in a run off election— the first since the 60s— coming up December 3.

Tuesday's forum at the Grove Hotel was open to the public, but registration for lunch service required in advance.Coffee-only seats were available at the door. Registration prices started at $5.00 per person.

This forum was sponsored by Concordia University School of Law and supported by the League of Women Voters of Greater Boise Area -- a nonpartisan organization that seeks to educate voters.

City Club of Boise is a nonpartisan, 501c3 nonprofit organization governed by a volunteer board of directors and supported by contributions and memberships. The organization was founded in 1995 by those who believed that any problem, no matter how difficult, could be solved by people with open minds using civil discourse.

More details on the forum are here.