Made in Idaho: Local company takes the tangle out of utility rope 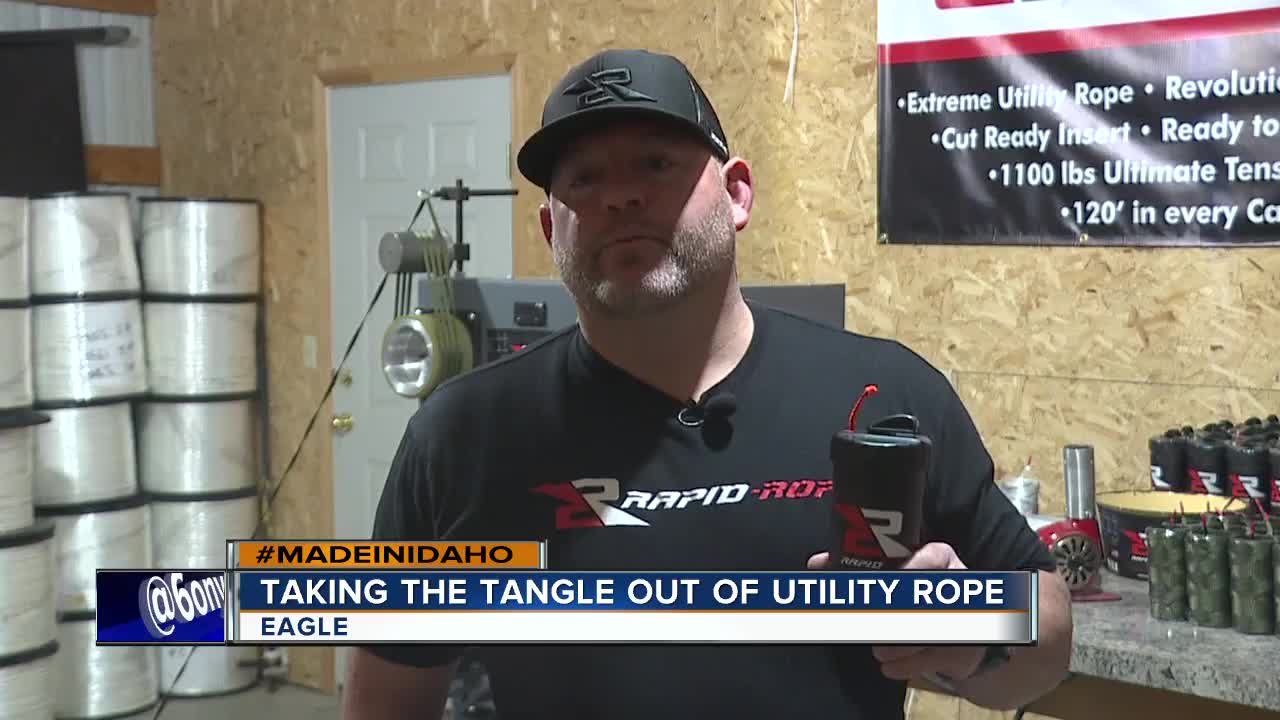 Last week we introduced you to a local couple who landed an appearance - and a *deal - on the hit a-b-c show "shark tank" for their unique approach to utility rope. In this week's "made in idaho".. our rachel garceau takes a closer look at the story - and the people - behind eagle-based "rapid rope."

EAGLE, Idaho — If you've ever struggled to find the fun in unfurling rope for a camping or gardening project, fearing the jumbled mess it will eventually become, one Idaho-made product might just change your mind. Local entrepreneurs Chris and Geanie Rodgers are the inventors of Rapid Rope, tangle-free, extreme utility rope that comes in an efficient and easy-to-store canister. Chris explains, "You simply pull out what you need, has the little cut insert on top, you wrap it around it, cuts it off, ready back for storage then you can use your rope as needed."

Don't let the neat and tidy packaging fool you, though; Chris says this rope is as tough as it gets. "It's about the same diameter as your standard paracord but it's double the strength...Rated at 1,100 pounds breaking strength."

The rope starts out in bulk, on huge rolls that are delivered to the couple's workshop in Eagle. It's then wound by Chris, Geanie and a small army of family and friends into 120-foot coils to fill the plastic containers that fit in your cupholder.

Rapid Rope has been a labor of love nearly a decade now in the making, and Geanie admits there were times the couple thought about putting it on the back burner, saying, "You know we've got 5 kids and we've got jobs and a lot going on." But their perseverance paid off, as the Rodgers' recently managed to land a deal on ABC's Shark Tank, where the couple's unique product - and presentation - won over shark Barbara Corcoran. Chris says, "It's always been a dream of ours to get on Shark Tank and have a product worthy enough to get on there."

While sealing a deal with a 'shark' validates the Rodgers' years of hard work, Chris and Geanie say having a one-of-a-kind product that from the labels to the packaging is made right here in the Treasure Valley, makes them just as proud. "I think there was a couple times we probably thought about giving up but we stuck it out...[And] we are so proud to have a majority of this product made right here in the valley. And that's where we're gonna keep it for sure, our family comes and helps put everything together but it is, it's made in Idaho."

Since their Shark Tank episode aired, the Rodgers' say business is booming so much they've had to hire some extra employees. They've been in touch with Corcoran several times and are working on business strategies and marketing ideas. They've also had the military and some police and fire departments express interest in Rapid Rope! If you want to find out more about this Made in Idaho company, you can find them online here.