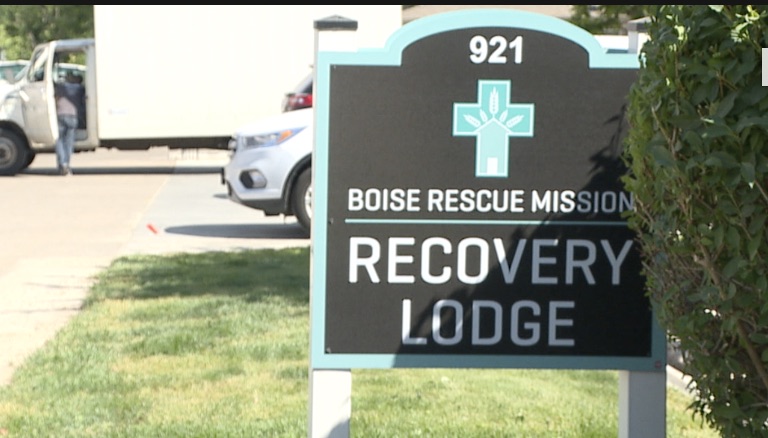 The Recovery Lodge, the first respite shelter in Idaho, is opening this month, and project leaders from the Boise Rescue Mission say it has a special focus on giving homeless people with medical needs a place to safely recover.

NAMPA, Idaho — The first respite shelter in the state of Idaho is opening this month. It's called the Recovery Lodge, and project leaders from the Boise Rescue Mission say it has a special focus on giving homeless people with medical needs a place to safely recover.

Reverend Bill Roscoe, CEO of Boise Rescue Mission, says the Recovery Lodge will celebrate its grand opening July 17, and will begin accepting guests August 1. The lodge, which can house a maximum of 45 guests, is located on West Corporate Lane, directly adjacent to the Rescue Mission's Valley Women and Children's Shelter.

But before his vision became clear on this latest endeavor, Roscoe says a young boy named Henry inspired it all.

He was born in a local hospital, "with terrible heart issues," said Roscoe. "Needed surgery, and he couldn't get surgery for a few days after birth, but mom and him had to leave the hospital. And they were homeless, and mom had no where to go."

Thankfully the mission set him up with a place to go-- in a transitional housing unit for low-income mothers like Henry's-- which by the way, Roscoe said is, sadly, a diminishing resource due to the affordable housing crisis, however, at the time was able to keep Henry safe during recovery.

"The baby was so fragile that one of the nurses at that hospital at his 2nd birthday party told me, that if this baby had been moved into a typical shelter environment, it's not likely he would have survived. Because he probably would have caught some virus or cold or flu, and that would have killed him," said Roscoe.

And Henry's needs are not unique. Considering the amount of people Roscoe says are currently in need of medical support in his shelters, the demand, he says, is dire.

"Right now we have 30 people, and I'm sure [Interfaith] Sanctuary has at least a dozen people-- maybe more-- who ought to be in a place like that, who need that kind of special attention," said Roscoe.

"It was too much. So I went to board and said, ya know, 'We've got to get going,' We've talked about it, we thought about it, it's time to do it," said Roscoe.

The Recovery Lodge aims to give structured health care and support services to homeless guests with medical issues that cannot be effectively addressed in a shelter environment.

Due to the affordable housing crisis, Roscoe says shelters have been increasingly full lately.

"Our numbers for this time of the year-- being in the middle of summer right now-- look like we're serving between 30 and 40 more people every day with shelter than we were a year ago," said Roscoe.

Guests will be able to stay at the lodge for as long as they need, as determined by medical staff.

"But fom the day you get there, we're gonna be talking about the day you leave, because we want everyone to stay focused on getting out of here, so that bed's open for the next Henry."

Henry, as it turns out, not only fought the odds, but continues to inspire.

"One of the rooms in the lodge is called Henry's room," said Roscoe.

Visit the Rescue Mission's website to learn more about the Recovery Lodge.