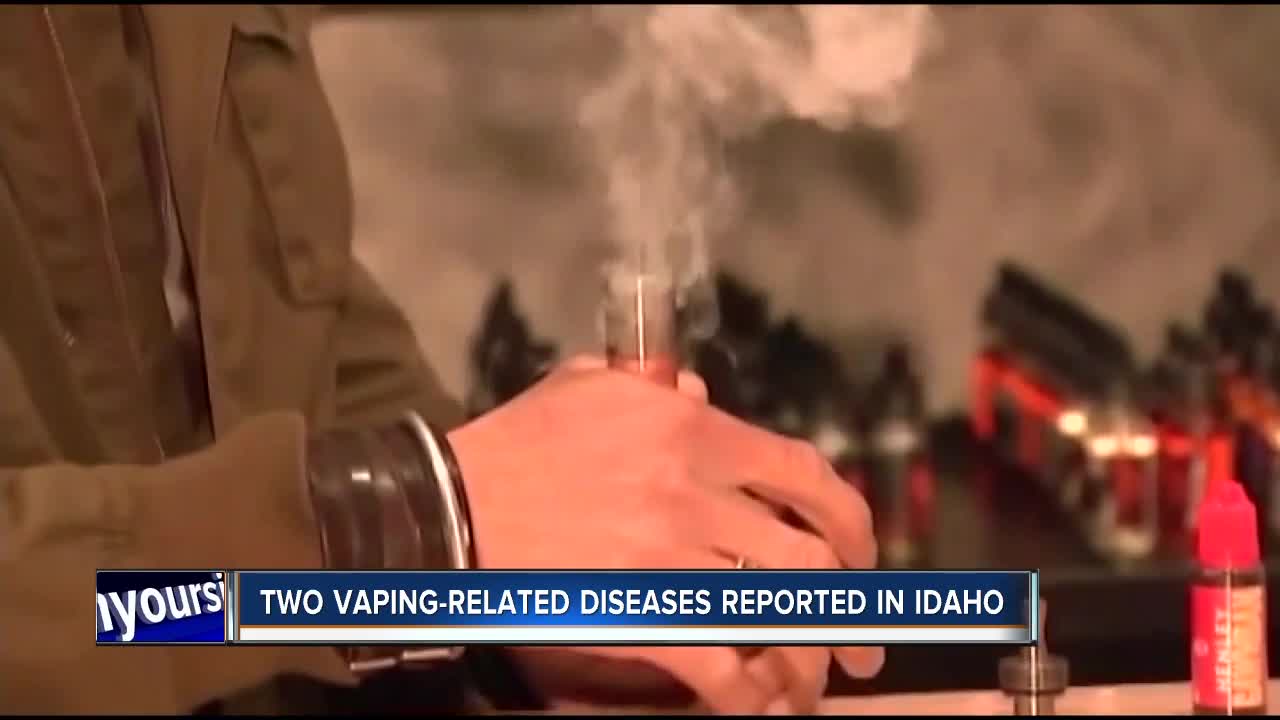 Officials are not releasing details about the two patients except to say "One is in southwest Idaho, and the other is in south-central Idaho," said Idaho Department of Health and Welfare spokesperson Niki Forbing-Orr.

State health officials are also investigating what Forbing-Orr calls three additional unconfirmed cases. “These cases are still under investigation (to determine the cause),” she said.

State and local public health agencies, the Centers for Disease Control and Prevention, and U.S. Food and Drug Administration are investigating severe pulmonary disease among people who use e-cigarettes or vape -- with 450 possible cases reported to date in 33 states and 1 U.S. territory. Five deaths have been reported from other states.

“Consumers who use vaping products and e-cigarettes are urged to avoid buying products from the street and to refrain from modifying or adding any substances to products purchased in stores,” she said. “Individuals who have recently used vaping products such as e-cigarettes and are having difficulty breathing should seek medical attention immediately.”

Related: FDA warns Juul about marketing its product as a safer alternative to cigarettes

Clinicians have been asked to be on alert for signs of serious respiratory illness among patients who recently used vaping products -- including e-cigarettes -- and report any cases to public health officials as the nationwide investigation continues.

“Idaho healthcare providers are notifying us of patients with severe respiratory symptoms who report vaping in the days or weeks before they became very sick,” said Deputy State Epidemiologist Dr. Kathryn Turner. “We are investigating each report and looking for things that might be common among the patients, as well as asking about the types of vaping products and devices people have used to try and pinpoint the source of these illnesses.”

Patients have had symptoms that include cough, shortness of breath and/or chest pain that has grown worse over a period of days or weeks before admission to the hospital. Other symptoms may include fever, fatigue, nausea, vomiting and/or diarrhea. The reports received from Idaho providers are among teenagers and young adults.

Idaho public health officials are concerned about the health risks of vaping products. "Many teens have dangerous misperceptions that vaping is harmless,” Forbing-Orr stated. “Most vaping products contain nicotine, the addictive drug in regular cigarettes, cigars, and other tobacco products. Nicotine exposure during adolescence can impact learning, memory, attention, and harm the developing brain. Using nicotine in adolescence can also increase risk for future addiction to other drugs.”

In addition to nicotine, the aerosol users inhale and exhale from vaping can potentially expose them to other harmful substances, including heavy metals, volatile organic compounds, and ultra fine particles that can be inhaled deeply into the lungs, health officials said.

“Many vaping products come in kid-friendly flavors -- making vaping more appealing to young people. Some of the chemicals used to make certain flavors may also have health risks,” Forbing-Orr pointed out.