Human trafficking is on the rise in Idaho; here's what you need to know 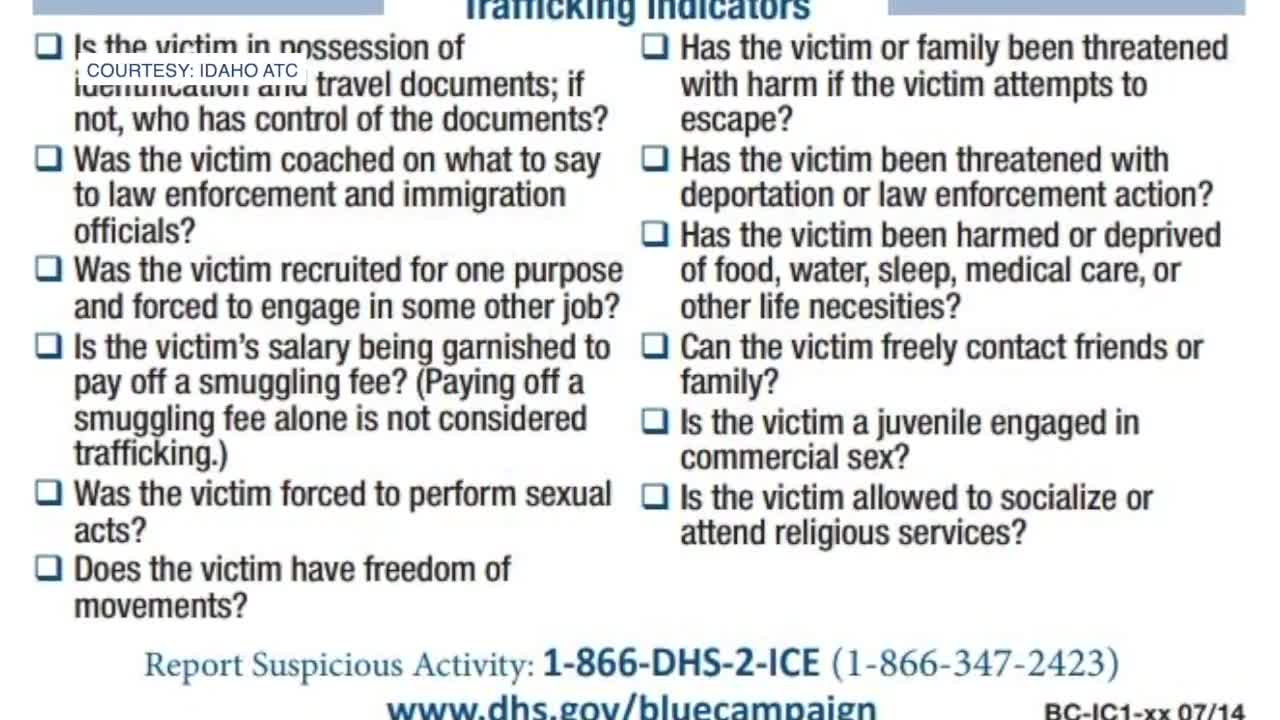 IDAHO — Human trafficking is on the rise globally and right here in Idaho. It's a multibillion-dollar a year industry that affects children and adults everywhere.

"Through an increase in isolation and online use, solicitation is on the rise," said Zielinski.

Although efforts against human trafficking and data collection are fairly new in Idaho, Zielinski said that she was surprised at how much of need there is for their services within Ada County.

In an internet age, human trafficking thrives online; in chat groups, gating apps, Craigslist and any place where communication through buyers and sellers can happen.

“Predators will hang out there, so being mindful of 'Does this seem shady? You don’t know who is on the other end,” said Zielinski.

Children are easy victims for predators, of the 251 victims they helped this past year 21% were minors.

“So with our children just really keeping those protections on your apps, protection on your phone, so that you’re not accessible,” she said.

Being aware of and looking for signs of trafficking could help save someone from becoming a victim.

“When the situation just doesn’t seem right like it may come off as an abusive situation where maybe it looks like domestic violence or some form of control," said Zielinski. "And the environment itself is going to give you an understanding of does this fit, does it make sense?”

Trafficking is becoming a popular industry because unlike drugs you can keep selling a human over and over again. It will take a statewide effort to stop.

“We have to be able to get this education and awareness and effective training into all of our local and state agencies and into our school system, it’s a dialogue that isn’t happening enough and because of stigma we are still criminalizing victims," she said.

Idaho ATC is also working to change laws and city ordinances. Hotels need to monitor their guests and pop-up shops should be required to register their stores because this is where Zielinski said a lot of transactions happen.

“It’s been identified that there are about 260 illicit massage parlors in Idaho and with that individuals are being sold simply because they aren't being regulated," she said.

Trafficking is happening everywhere and can happen to anyone. It's all along the I-84 corridor, at truck stops and buyers and sellers even show up at house parties.

The Idaho ATC is focusing their efforts on three areas. Their outreach by starting the conversation and education in schools, churches and our communities. Their trauma clinic provides counseling, peer support and direct services. Also, their safe housing for victims.

July 30 is World Day Against Trafficking, and you can join the fight by spreading awareness and standing in solidarity by wearing blue.

To learn more or to find out how you can get involved click here.