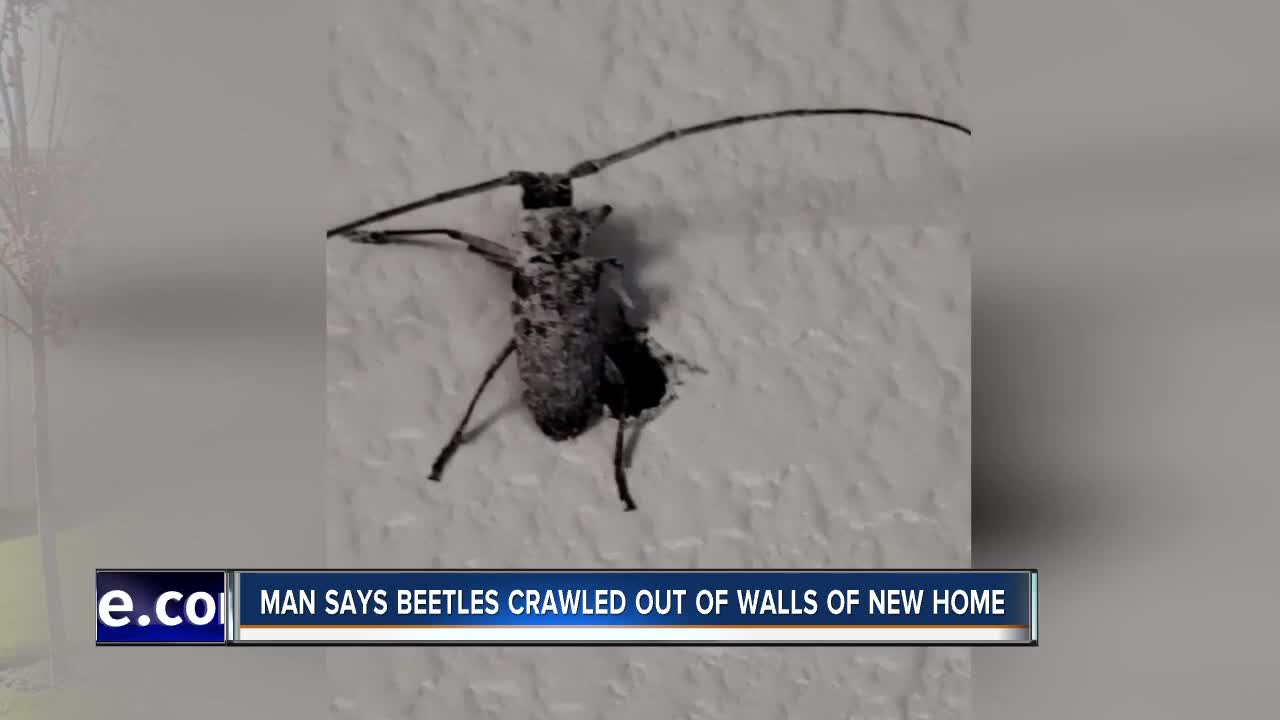 MERIDIAN, Idaho — It’s a homeowner's worst nightmare; giant beetles crawling their way out from inside the walls of a brand new home, but a Treasure Valley family is experiencing just that.

Travis Stockham purchased his home, brand new, in May of this year. It wasn’t two weeks later when he said the first bug bore out of the wall; and that wasn’t the end. Now Stockham said he’s working with his builder to reach a solution, but each of them have a different solution in mind.

“I think it was June 6th, I had a bug burrow out of my wall,” said Travis Stockham, owner of a new CBH Homes home.

It crawled out of a wall on the second floor of the brand new home Travis moved into in late May.

“Two to three weeks later, my first floor I had the same thing happen,” said Stockham.

Large beetles, eating their way through his dry wall, leaving a round hole about the size of a pencil eraser behind.

“Bugs don’t usually travel in one, so I assume there’s a high possibility that other wood’s been infected,” said Stockham.

And at the scary thought that there might be more of these creatures housed inside his walls, Travis called his home builder, local company CBH Homes.

“I asked them just to give me an extended warranty on the wood that these bugs are burrowing out of in case I have disclosure issues if I ever wanna sell this thing, which they have refused,” said Stockham.

What CBH did offer to do, however, is send an exterminator to the home to evaluate the issue.

In a statement from CBH Homes they say, “We have been in contact with this homeowner since his original warranty work order was opened in June regarding the presence of two longhorn beetles. This occurrence is not something we have seen before. We felt this was an unusual circumstance and agreed to hire a third party professional who sent their technician on June 28, 2019 to inspect and treat the issue. Upon the technician's inspection, it was agreed with the homeowner that they would monitor the site weekly, as the technician communicated this particular beetle species isn’t a significant pest. No further evidence of pests or damage has been found since the initial issue. We also agreed to assist the homeowner with drywall patches and paint touch up needed once the homeowner is ready. Should the homeowner find evidence of further beetles both our office and the pest control provider have supplied the homeowner with written letters stating we will return to his home to inspect and further treat if needed. This homeowner's initial concern was addressed through our warranty department, then reopened and reevaluated when this homeowner filed a Better Business Bureau complaint. The BBB has reviewed our response and actions, and has determined the issue has been addressed in the complaint, and has closed the complaint.”

While true, the last burrowing beetle made its appearance over two months ago, a local entomologist suggests this saga might not be over.

“When these beetles land on a tree or on lumber, they typically lay several, up to a dozen or two dozen eggs,” said Paul Castrovillo, Entomologist for the Idaho Department of Agriculture.

It’s called a flat-faced longhorn beetle, and Castrovillo says its typical lifespan starts as an egg, hatches as a small grub, gnaws its way into lumber or whatever wood it’s attached to where it then lives for a few years while it matures.

“Typically within 5 years or so, all of the beetles that were in the wood are out or they’re dead,” said Castrovillo.

Which begs the question, would an exterminator be able to eradicate all of the beetles from inside the home?

“In most cases I don’t think the exterminator could do anything that could get rid of the bugs because A, you don’t know how many bugs are there, where they are, cause they’re inside the lumber in the house,” said Castrovillo.

And in their own time, they’ll work their way out, on the hunt for their next dead tree or pile of fresh lumber.

If there are more beetles inside the home, Castrovillo said it is not likely that they will cause structural damage to a home; they are not like a termite. He also said the only way to get rid of all the beetles now would be to fumigate the entire home with a lot of chemicals, which would be very expensive. The easiest way he said, is to just let the bugs run their course, which could take up to a few years.

The flat-faced longhorn beetle is a native species to Idaho, and Castrovillo said they are not dangerous bug to humans.