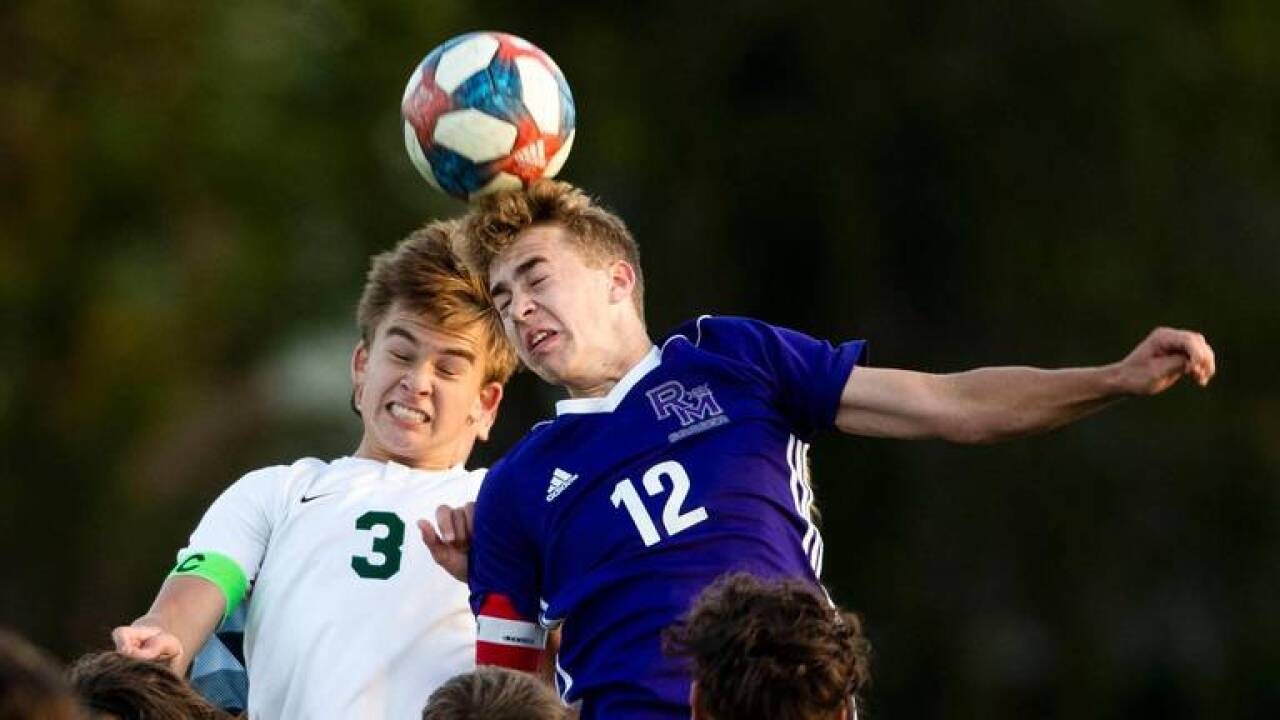 COURTESY OF DARIN OSWALD, IDAHO STATESMAN
Rocky Mountain High School senior Keegan Oyler gets the header in a matchup with Eagle’s Grant Embree on a corner kick Wednesday in Boise. Rocky Mountain defeated Eagle to win the 5A District Three boys soccer championship. The close contact in soccer has led to some Treasure Valley athletes being quarantined when teammates test positive for COVID-19.

This article was originally published by Chadd Cripe in the Idaho Statesman.

More than 150 students in the Boise area are quarantined because of COVID-19 cases on their school or youth sports teams — one reason Central District Health has asked for a “pause” in most of those activities while Ada County is in the red category of community spread.

Central District Health Director Russ Duke told the Idaho Statesman on Thursday that if COVID-19 cases continue to rise in Ada County, hospitalizations increase and outbreaks are identified on athletic teams, he’ll recommend the Board of Health issue an order restricting K-12 and youth sports activities.

Updated guidance for youth sports should be released Friday, he said. CDH announced its request for a pause in athletics Oct. 9 in anticipation of moving Ada County schools into the red this past Tuesday.

The recommendation doesn’t apply to Boise State football, which is testing its athletes and coaches at least three times per week.

The CDH sports recommendation is about managing the risk of transmission in a county averaging 117.9 new COVID-19 cases per day (confirmed and probable) over the past week, Duke said. CDH recommended that Ada County schools proceed with in-person school using plans that promote physical distancing, like alternate-day schedules.

Boise School District high school and middle school students will get their first in-person instruction in more than seven months next week.

Parents, Duke said, need to weigh the benefits of sports against the potential of a 14-day quarantine. Teams around Idaho — including the Bishop Kelly High girls soccer team — have been quarantined because of the difficulty of determining close contacts in sports environments.

CDH has “over 150 on quarantine due to youth athletics, and that number is growing daily,” spokesperson Christine Myron wrote in an email.

CDH has quarantined athletes most frequently in volleyball, soccer and football, Myron said, but also in cross-country and cheerleading — with most cases in high school and middle school programs. Most of its quarantines have come in Ada County, she said. Boise and Elmore counties also have been impacted.

CDH has identified teams with multiple cases, Duke said, and cases that appeared to spread from athletes to family members. He isn’t aware of any definitive links to transmission during sports activities, he said.

The recommendation to pause sports applies to those where physical distancing and mask wearing are impractical, like football, volleyball, soccer, wrestling and basketball, Duke said.

“We’re just really looking at it from a risk perspective … reducing the risk,” Duke said.

The Boise School District, which didn’t allow full practices and competitions when Ada County was in the red category in August and early September, said last week that it would continue with sports in the red because of the limited number of cases it has identified. The Boise High girls soccer team won the District Three title Wednesday.

“People are assuming that a decision that was made in August has to be the same decision that is made today,” Boise Schools Superintendent Coby Dennis told the Board of Trustees on Oct. 9. “From the data that we’re seeing around our sports, we have had a handful of cases where people have brought COVID to the school. We have had zero community spread as it relates to our sports. I’m thinking we’ve had five cases in our sports program that has been going on for almost five weeks now.”

Boise High School’s 5A district championship photo in the time of coronavirus. beat Rocky Mountain 2-1 to win the 5A girls district soccer trophy on Wednesday, Oct. 14, 2020 at Mountain View High School. Katherine Jones KJONES@IDAHOSTATESMAN.COM
The West Ada School District began practicing and playing in red earlier in the season. Spokesperson Char Jackson said the district is following the governor’s Idaho Rebounds plan and is working “in coordination with the Idaho High School Activities Association and Central District Health guidance to ensure we’re following safety protocols, and process improvements are made where needed.”

Asked how West Ada could be working in coordination with CDH guidance while ignoring the recommendation to pause athletics, Jackson cited the district’s use of CDH guidance “when it comes to things like sanitation,” best practices and contact tracing.

The Kuna School District did not respond to a request for comment.

Duke said he’s surprised by the schools’ willingness to push forward against the health district’s advice.

“We all want our lives to be what they were pre-COVID,” he said, “but it’s not going to be that way. Hopefully, we’ll get there eventually when we have an effective vaccine and we continually improve the treatment for people who get infections. I understand everyone’s desire if you’re a parent and you have a son or daughter who is playing sports — you want them to have a normal experience. I get it. My concern, obviously, is it’s high risk and we’re seeing a lot of community transmission going on right now. Usually, that’s followed by increases in hospitalizations and the severe consequences.

“… If it gets a lot worse, then I’m hoping we’ll get better cooperation with the recommendation.”

One of the challenges youth and school sports face — and, perhaps, a reason the Boise School District case numbers are low — is the lack of robust testing in Idaho.

In college football, where testing is conducted frequently, outbreaks have been identified at programs all over the country. At least 31 games have been postponed, including three this week involving Top 25 teams.

In Idaho, students quarantined without symptoms might not even be tested.

“Since asymptomatic testing is still not being widely offered, it is a mixed bag of people being tested or not with these youth sports-related quarantines,” Myron wrote.

The risk of severe illness is very low among children, but the concern is that they’ll spread the disease to those who are more vulnerable, Duke said. Idaho has reported 521 COVID-19-related deaths, with about 80% in people 70 or older.

If young athletes don’t have symptoms, they likely have no idea they’re carrying the virus.

“Unless there is mass screening, which is not happening — not at all, in these populations … I’m 100% certain there’s cases out there that we’re not catching,” Duke said. “What that leads to is the kids take it home.

“… If there’s enough asymptomatic cases, they can spread the disease and we’re not capturing it because we still have, quite frankly, inadequate testing capabilities here in Idaho and throughout the country.”

HOW COVID-19 SPREADS IN ADA COUNTY

Central District Health says that 50% of cases in September across the district (Ada, Boise, Elmore and Valley counties) were connected to other known COVID-19 infections. A common way the virus spreads is within families, Duke said, and that frequently starts with kids. CDH reported 1,341 cases of COVID-19 in the under-18 age group as of noon Thursday, but just four hospitalizations.

Another 25% of cases have no known origin. Those are labeled community transmission.

The other 25% involve people who traveled during the two weeks when they likely contracted the virus, or people who contact tracers couldn’t reach, Myron wrote. Of these, a small percentage are truly travel-related — if the people were outside the area the entire two weeks they could have become infected — while others traveled for some portion of that time and it’s unclear where they picked up the virus.