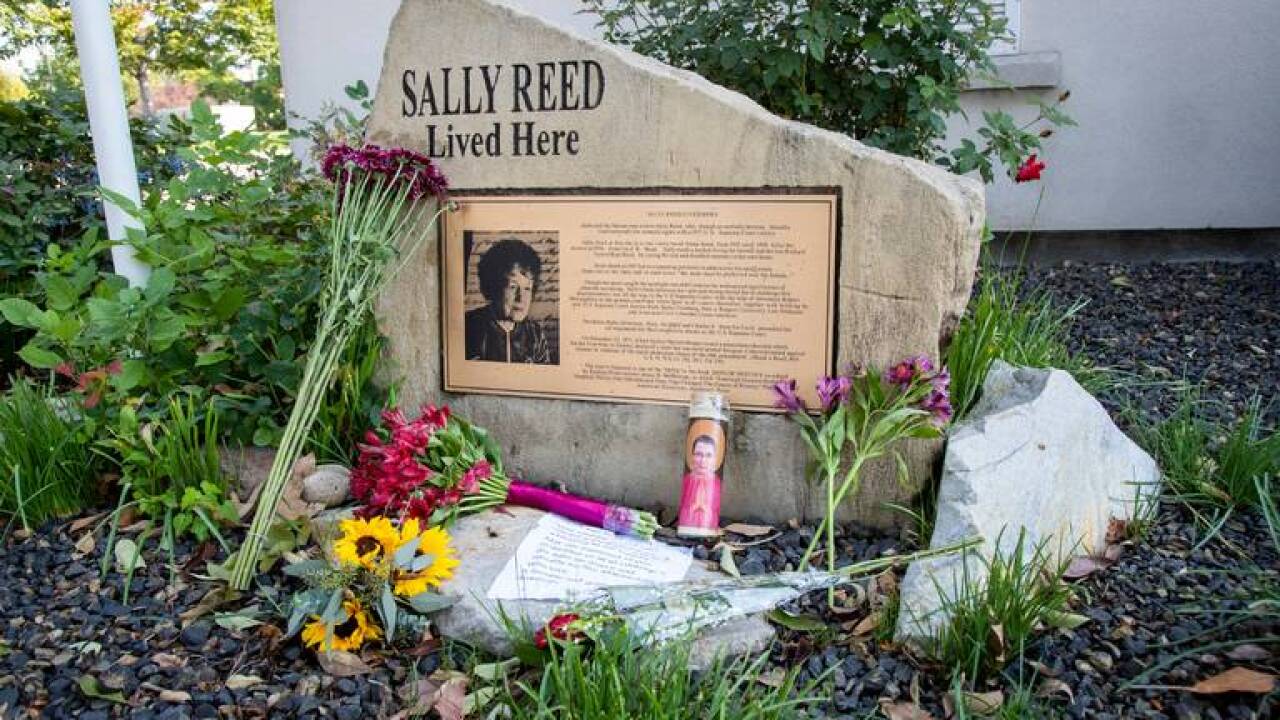 Courtesy of Katherine Jones, Idaho Statesman.
With a briefing by Ruth Bader Ginsburg, who was the a law professor, Sally Reed took a landmark case to the U.S. Supreme Court, which decided that Idaho Code’s preference in favor of males was arbitrary and unconstitutional. A monument to Reed is at the corner of Vista Avenue and Dorian Street, where she lived. It’s now Idaho Angler.

This article was originally published by Julia Frankel in the Idaho Statesman.

When Sally Reed — the woman whose case began at the Ada County Courthouse, ended at the Supreme Court, and is credited for kickstarting the movement for equality of women under the law — passed away in 2002, Boise attorney Allen Derr received a letter from the chambers of Justice Ruth Bader Ginsburg.

Ginsburg had written a brief in support of Sally for the 1971 case. Over 30 years since that case, Reed v. Reed, she remembered the moment she heard that the justices had made a unanimous decision in Sally’s favor.

“In my treasure trove of memories,” wrote Ginsburg in her letter to Derr, asking him to read her words aloud at Sally’s funeral, “is the banner headline I read the evening of Nov. 22, 1971, announcing Sally’s victory. I was on a train, returning home from a day’s teaching at Rutgers. Tears of joy filled my eyes.”

Ginsburg often credited Reed as her “grandmother case,” the case that laid the groundwork for the series of others she took on as an attorney throughout the 1970s, chipping away piece by piece at sex discrimination under the law. Reed was also the case that kickstarted Ginsburg’s enduring friendship with Derr.

Derr, the celebrated Boise attorney who took on Reed’s case after 16 other lawyers turned her down, bringing it all the way to the Supreme Court, corresponded with Ginsburg up until his death in 2013. In their letters, they discussed their lives and their families and traded legal opinions on current cases under consideration by the court.

Judy Peavey-Derr had only met Ginsburg a few times, but after her husband passed away, she received a letter from Ginsburg.

“She wrote to me even though I’d only met her a few times, telling me about how she felt after Marty passed, and explaining how she was able to deal with the grief and take care of herself after the death of her husband. To think of me when Allen passed was so kind” said Derr, “but that was just who she was. What a grand lady.”

In Boise, the news of Ginsburg’s death on Friday has prompted many to remember her relationships with Idahoans involved in the Reed case — many of whom she never lost touch with.

The house where Sally Reed lived before her death in 2002 is gone now. But head to Vista Avenue and Dorian Street in Boise, and there, located just beside a sign for a flyfishing shop, is a memorial plaque commemorating the site on which the house once stood.

Since Ginsburg’s death, Boiseans have adorned the plaque with pink and purple flowers, black eyed Susans and votive candles with Ginsburg on them. A weathered paper sign lying at the base of the plaque reads, “Thank you Ruth and Sally. Your courage and actions started a revolution … may our memories of you embolden us all to continue the fight for justice and equality for all Americans.”

By the time Reed walked into Derr’s office, accompanied by two friends for moral support, 16 lawyers had already turned her away. But Derr agreed to take her on.

Reed had attempted to file a petition for her son’s estate after he killed himself. The estate included just his clothing, clarinet, phonograph records and college savings account of $495, according to a 2013 Associated Press article. But Reed’s petition was denied, because an Idaho statute said that in cases where estate administration is contested, “the male must be preferred over the female.” The estate went to her ex-husband.

The case went to the Idaho Supreme Court, which ruled on behalf of Reed’s husband. To the Idaho court at the time, men were better at administering estates than women. “Nature itself had established the distinction,” they wrote.

The case was then taken up by the Supreme Court, where Ginsburg’s brief and Derr’s oral argument made the same argument: The gender discrimination codified in the Idaho law prohibiting Reed from having equal claim to her son’s estate violated the equal protection clause of the 14th Amendment.

The argument was ambitious — the court had never found gender discrimination unconstitutional under the Equal Protection Clause.

“At that time, equal protection wasn’t really developed to apply to gender,” said Shaakirrah Sanders, professor of constitutional law at University of Idaho College of Law. “You had only seen it applied to race.”

Ginsburg’s brief was radical for the time — even though Ginsburg wrote the brief herself, it listed two co-authors, who had provided the legal theory for her argument. One was Pauli Murray, a black, queer civil rights activist and lawyer.

“Giving credit to a black queer woman was not something that people would have been eager to do in the early 1970s,” said Sanders, “so Justice Ginsburg distinguished herself not just by her work on the brief, but by her approach to giving credit to people, even when it’s unpopular to acknowledge a person’s existence.”

The court was convinced by Derr and Ginsburg, ruling unanimously, for the first time ever, that a state law violated the rights of women to equal protection under the Constitution, a decision which would provide Ginsburg with the precedent she needed when tackling similar gender discrimination cases later in her career.

Reed v. Reed provided the legal foundation for rulings like the court’s decision in 1996 that Virginia Military Institute, a school that receives public funds, could not exclude women. Justice Ginsburg, by then having climbed from her professorship at Rutgers to a seat on the Supreme Court, wrote the majority opinion.

Sanders even traces all court decisions on LGBTQ rights back to Reed.

“All of the jurisprudence on equality for LGBTQ status, including the case that was decided this summer, Bostock, where the court said LGBTQ status is the same as gender or sex for purposes of federal statute, is a legacy of Reed,” she said.

“For me as a black woman, beyond being a lawyer or a law professor, as a black woman, her legacy represents half of my identity in some ways, right?” she said. “And so for me, she ranks with Justice (Thurgood) Marshall.”

Peavey-Derr remembered how often letters from Ginsburg would arrive for her husband, even years after Reed.

“Ruth told Allen again and again how proud she was to have been involved with the Reed case,” she said. “And she showed that pride, too. She never forgot anyone.”

The RGB Remembrance and March for Equality will begin at 12:45 p.m. Saturday, where participants will gather at Julia Davis Park and march to the Idaho Supreme Court building in Downtown Boise.

“The community is invited to attend a peaceful march and remembrance to mourn Justice Ruth Bader Ginsburg and encourage individual and community action in her honor,” the Facebook event for the gathering says