'He really saved me!' 14-year-old Nampa boy rescues elderly man who fell into a canal

The Nampa middle schooler and his stepdad reunited Wednesday with the elderly man they rescued. 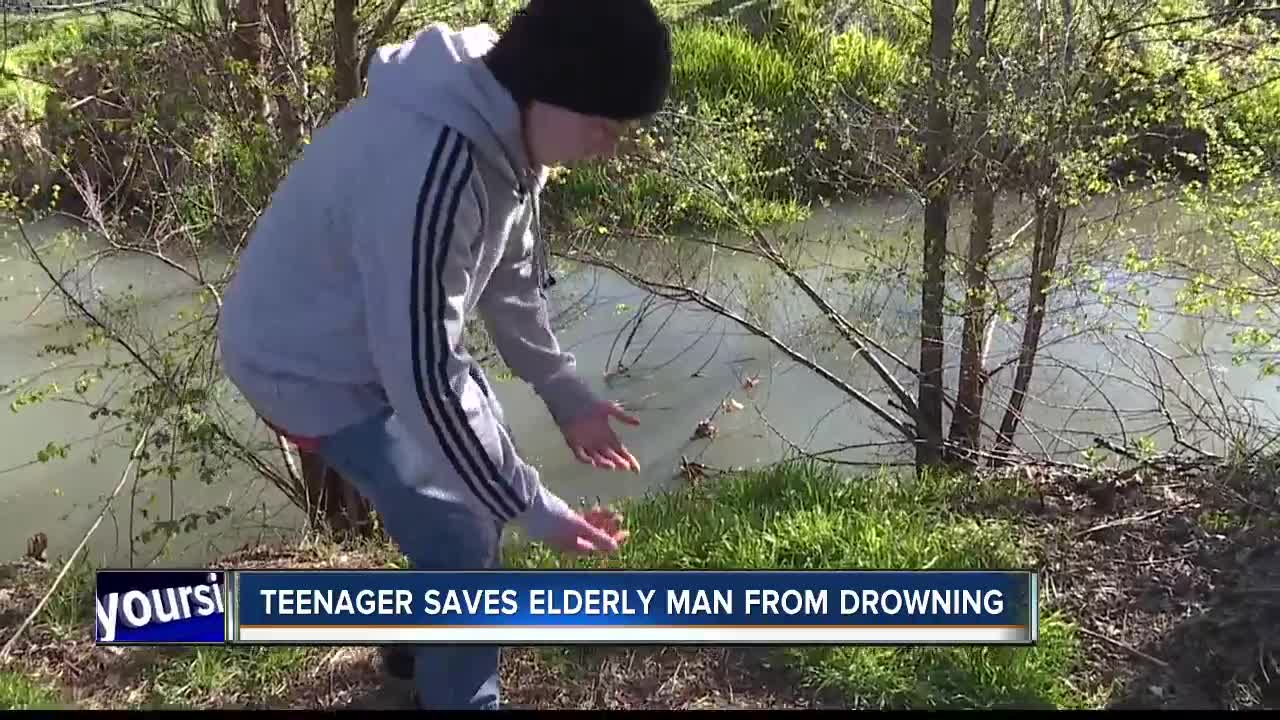 A 14-year-old and his stepdad had an emotional reunion with the 84-year-old man whose life they helped save. The elderly man fell into an irrigation canal near the Cobblestone Square subdivision Friday while feeding popcorn to passing ducks.

NAMPA, Idaho — A 14-year-old and his stepdad had an emotional reunion with the 84-year-old man whose life they helped save. The elderly man fell into an irrigation canal near the Cobblestone Square subdivision Friday while feeding popcorn to passing ducks.

A couple of young children came running for help after first seeing him there. Teenager James Rine, who lives next door, says it was pure impulse to remove his shoes and dive in to the canal after the elderly man.

"We were just gettin' done with some yard work and a couple of small kids came runnin', screaming back here that someone fell in a ditch," said Michael Hart, Nampa resident.

That's when Michael Hart and his 14-year-old stepson James Rine jumped into action.

"I hurried up, took my shoes off, jumped the fence and ran back over there," said Rine, an eighth grader at West Middle School.

The kids were right: they found an elderly man struggling for his life in the icy water behind their house.

Rine said there wasn't much time to think.

"All I thought was about making sure he was okay," said Rine.

He navigated down the steep embankment and got in the ice cold water.

"Picked him up from the back like this (gesturing), and kind of leaned him over my leg and held his head," said Rine.

This while Hart extended a long pole for Rine and Berrera to hold onto.

"And the water was deep, coming into my mouth, so holding there... my head up!" said Berrera.

Rine says he stood waist-deep in the water like that for 15 minutes before EMTs arrived--then another 15 minutes once they did.

"They had the ambulance right here, had a rope down to the crate, and then had two ladders right here to pull him out of the water," said Rine.

He says emergency responders got them both out, wrapped a blanket around Berrera, and rushed him to the hospital, where Berrera said he only stayed for about three hours.

So what was he doing down by the embankment? He says his wife had old popcorn that she had suggested he feed to the ducks.

"As soon as I got so near, my balance went off right in the water," said Berrera. "I'm really really happy about it--that I didn't break my bones."

Now, a heartwarming ending was had--and a lifelong bond created--for these Nampa neighbors.

After a week of not being sure of his condition, Rine and his stepdad were pleased to learn that Berrera was okay.