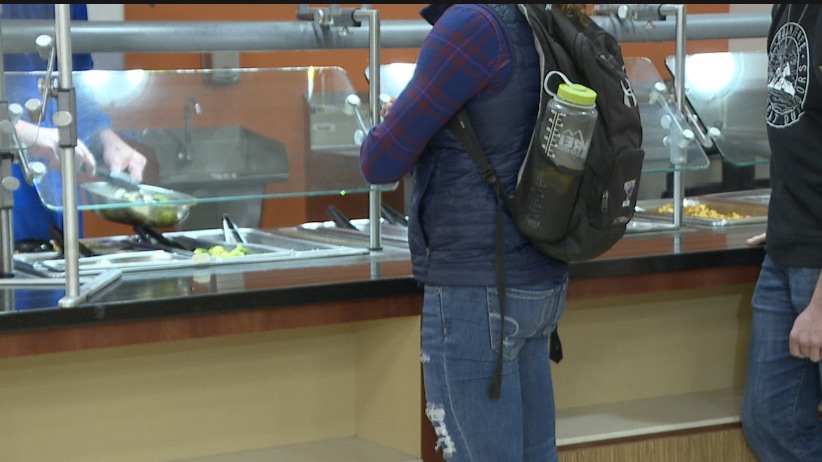 Food insecurity is a growing problem nationwide on college campuses, but here at Boise State-- as a part of the Full Broncos Meal Project-- students are giving back in record numbers to make sure that no student goes hungry.

BOISE, Idaho — Food insecurity is a growing problem nationwide on college campuses, but here at Boise State (BSU)-- as a part of the Full Broncos Meal Project-- students are giving back in record numbers to make sure that no student goes hungry.

A simple swipe of a card unlocks a buffet of nutritious food options at the BSU river cafe. But for many, that swipe has less-than simple consequences on their budgets.

According to a nationwide survey released Tuesday, 45 percent of college students or nearly half say they didn't have enough money for nutritious food last year.

"Here at Boise State those numbers are around 36 percent, so this really is a nationwide problem. We're just trying to find ways to support our Broncos," said Jessie Dexter, project organizer and masters student, Boise State.

Now through May 11, students can donate unused guest meal swipes to a fellow Bronco in need.

"You come up, you ask-- no questions asked-- and you keep moving on with your life," said Jason Moore, Dining Services Intern, Boise State.

And there's no instant ramen here; they've got the real stuff.

"I think we all know if you're eating high-process foods or really poor diet, it can impact your performance in school," said Dexter. "Ya know it's really unfortunate that a student would have to drop out of college because they couldn't afford to eat."

In the two weeks since it started, organizers said the donation numbers have more than tripled compared to the same amount of time last semester.

"It's an amazing feeling to know that you're in a community that cares this much about itself and about each other," said Moore.

The student-led initiative was made possible by Boise State's Campus Dining Services and Aramark.

If you're interested in donating to help campus food insecurity you can do so at the Campus Food Pantry. To learn more about food assistance programs, click here.