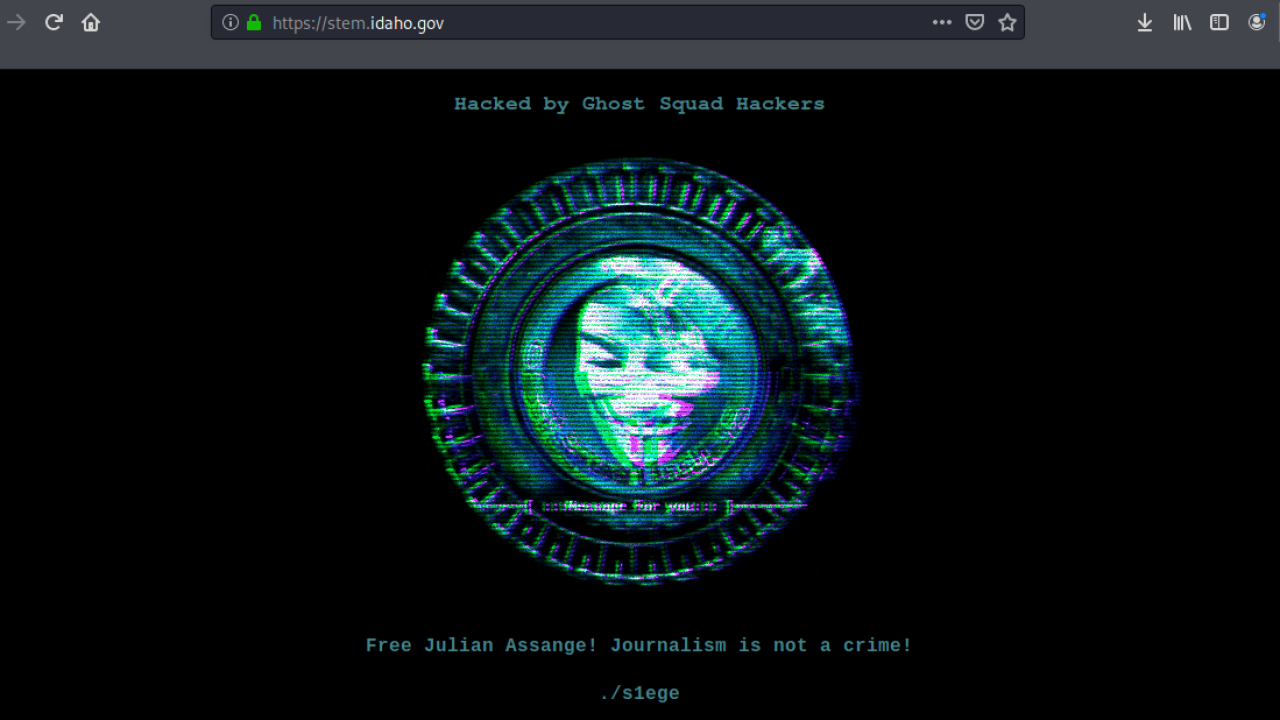 BOISE, Idaho — This article was written by Nicole Blanchard with the Idaho Statesman.

Three Idaho government websites were hacked on Sunday evening to display a message calling for the release of imprisoned WikiLeaks founder Julian Assange.

The Idaho State Parks and Recreation, STEM Action Center and personal protective equipment supply site homepages each displayed the same content: a black background with the text “Hacked by Ghost Squad Hackers” displayed in blue text. “Free Julian Assange! Journalism is not a crime!” reads a message displayed underneath a GIF of V, the Guy Fawkes mask-wearing vigilante from the 2005 film “V for Vendetta.”

Ghost Squad Hackers is a collective of unidentified hackers, many of whom have roots with the “hacktivist” group Anonymous. The group’s de facto leader last month told Indian news website The Wire that the group’s “prime intent and focus is on anti-governmental and organisation cyber protests within current involvements of media speculation and real life happenings.” Recently it hacked Indian government sites, and the group has reportedly targeted the U.S. military and terrorist group ISIS in years past.

In an email Sunday night, Idaho state director of information technology Jeff Weak said the Parks and Rec website had been fixed. All three sites were displaying their normal messages on Monday morning.

“There was absolutely no compromise of data, or ransomware applied,” Weak said. “This is the equivalent of digital graffiti.”

“Although I’m sure the group targeted the entire state, those were the only three sites they gained access to,” Weak added in an email Monday morning. “We have multiple layers of security and our processes follow industry best practices. That said, we’re doing a top to bottom review of all our sites and configurations.”

It’s not the first time state websites have been caught up in hacking incidents. In 2017, the state treasurer’s website was taken over with a pro-Islamic State message, and in 2018 the Idaho Legislature’s website was hacked with a message written in Italian and a video from hacker group AnonPlus. No sensitive data was compromised in either incident, but a 2016 hack of the Idaho Department of Fish and Game license database raised concerns that sensitive information may have been compromised.