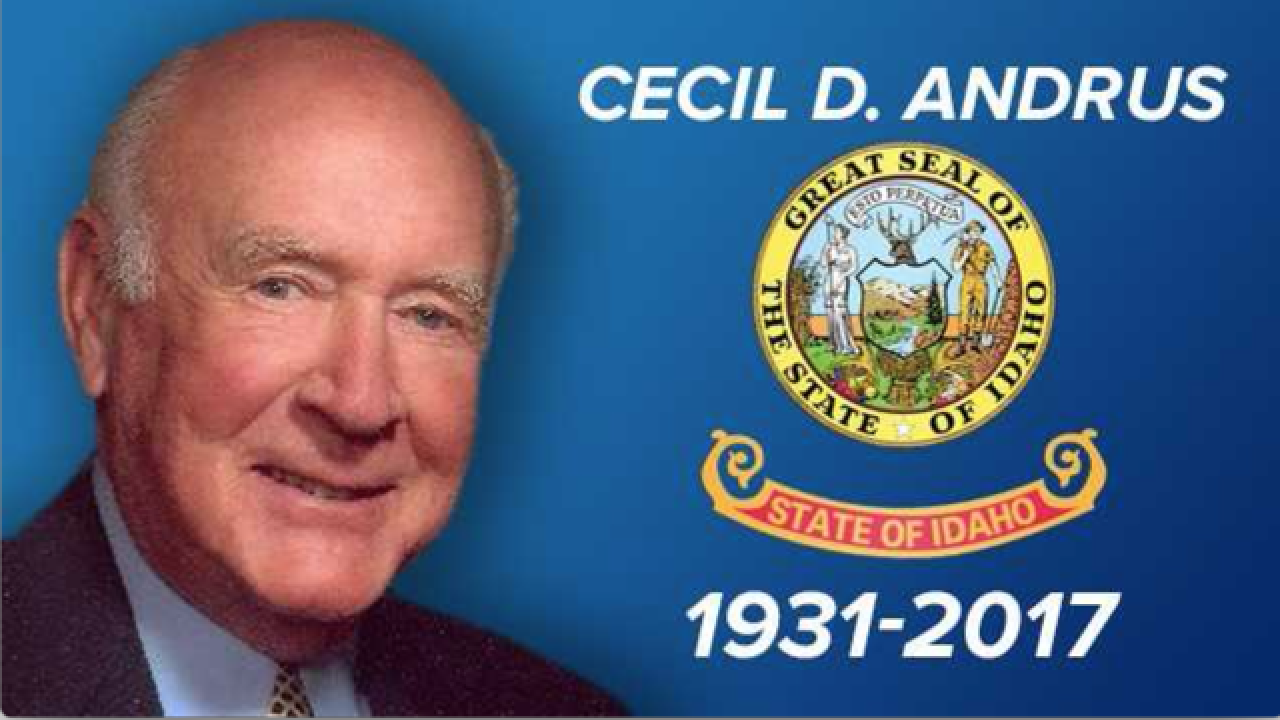 Andrus is the only Idahoan elected four times as the state's governor.

Andrus was 39 years old when first elected as governor in 1970. He was reelected to the position in 1974.

Andrus then served four years as Secretary of the Interior under President Jimmy Carter.  President Carter has said Andrus was the only person he considered for the job.

During his time at the Department of the Interior Andrus helped pass the Alaska Lands Act which designated more than 100 million acres of public land as protected area.  That legislation led to the creation of or addition to 13 national parks, 16 wildlife refuges, two national forests and two national monuments.

After serving under President Carter Andrus returned to Idaho in 1981.  He ran a consulting business in Boise and served on various corporate boards.  He ran for governor again in 1986 and defeated incumbent Lt. Governor David H. Leroy by a thin margin.

Andrus was elected for his fourth and final term as governor in 1990, winning with nearly 70 percent of the vote.

Among the long list of the former governor's accomplishments and causes was his fight against nuclear waste storage in Idaho.  He strongly opposed federal efforts to store nuclear waste in the Gem State and at one point blocked shipments from the federal government's Rocky Flats site, even going so far as ordering Idaho State Police to stop and turn back a rail car carrying the material.  The government backed down and stopped the shipments.

When we asked him he if thought he had a legal right to post a trooper at the border to block the shipment he said he knew he didn't have the legal right, but sometimes you have to break the rules to do what's right.

His fight continued after he left office in 1995.  He worked with his successor, Governor Phil Batt, who made a deal with the feds agreeing to allow more waste in Idaho as long as they promised to remove all high-level waste from the Gem State by 2035.

In addition to his work protecting the environment, Andrus was a champion of education in Idaho.  He stablished kindergarten in Idaho during his second tenure as governor.  In 1995 he founded the Andrus Center for Public Policy at Boise State University.  In 1997 the West Ada School District named it's new school Andrus Elementary in his honor.

During the course of his career, Andrus served as chairman of both the Western and National Governors Associations.

He left office in January 1995, having served more than 14 years as the Democratic governor of one of the most Republican states in the nation. Andrus’ tenure ranks him as the 11th longest serving governor in United States history.

Andrus is survived by his wife Carol and by daughters Tana, Tracy and Kelly and grandchildren Monica, Morgan and Andrew and great granddaughter Casey.

Private funeral arrangements are planned for Wednesday, Aug. 30 in Boise.

A public lying in state ceremony will follow at noon on Wednesday in the Idaho Capitol rotunda and continue until noon on Aug. 31.

A public memorial service is planned for Thursday, Aug. 31 at 2:00 p.m. in the Jordan Ballroom of the Boise State University Student Union.

In lieu of flowers, the Andrus family suggests memorial gifts be made to the Andrus Center for Public Policy at Boise State University.

--Editors Note: This story has been edited to reflect an updated news release on Governor Andrus' death.  The original release stated he passed away on Wednesday, the update corrected that to Thursday.--