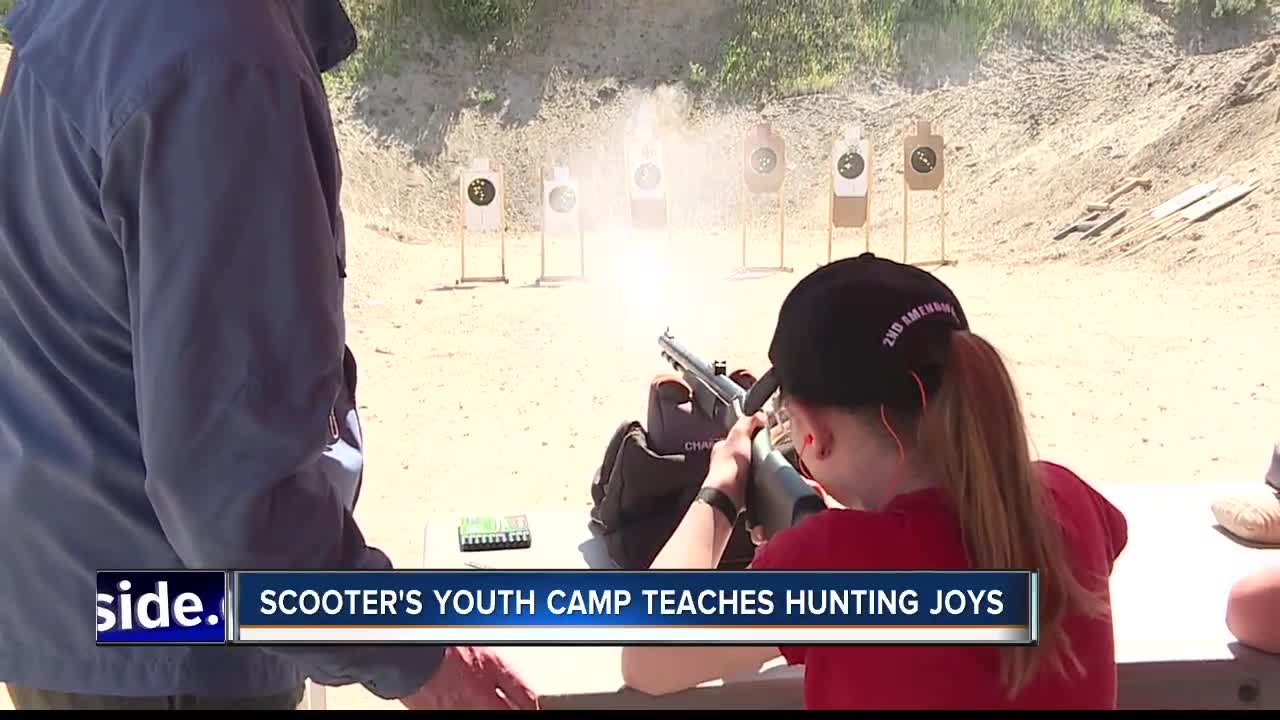 At the once yearly Scooter's Youth Hunting Camp Saturday, some 250 Idaho kids gathered at Emmett's "Rod and Gun Club" to learn to sharpen their knives, clean their own guns, and some-- even to find peace of mind again after medical struggles unfathomable at their age.

EMMETT, Idaho — At the once yearly Scooter's Youth Hunting Camp Saturday, some 250 Idaho kids gathered at Emmett's "Rod and Gun Club" to learn to sharpen their knives, clean their own guns, and some-- even to find peace of mind again after medical struggles unfathomable at their age.

Some special young ladies-- in particular-- said shooting their target was only part of the reason they were smiling today; after what they've been through, the joys of hunting are therapeutic.

As I previously reported, you might remember 11-year-old cancer survivor Cortney Walter from when she "got [her] elk." I caught up with her for an update at today's camp which is put on by the same group.

"Lots of food in the freezer," said Walter with a laugh.

Her dream hunting trip was made possible by the "Orange Army" (as they affecitonately call themselves) present at Scooter's Youth Hunting Camp Saturday.

"I kind of feel like a better person because I'm around a whole bunch of amazing people, and I feel like they've made my heart that much bigger," said Walter.

Scooter's team is made up of unpaid volunteers who-- in addition to teaching kids outdoor survival techniques at this once-yearly event-- also treat childhood cancer survivors every year to an all-expenses-paid hunting trip.

"It's getting out of the house, getting off the Xbox," said Scott McGann, a.k.a. "Scooter," founder of Scooter's Youth Hunting Camp.

"What makes it worth it to you?" I asked. "Smiles on the faces and a girl like Cortney who says her hearts bigger because she met me," said McGann, emotionally.

And another inspiring young lady preparing for her dream trip at the camp: 14-year-old Savannah Johnson from Middleton.

"It's just fun it gives me something to like look forward to," said Johnson. "I shot my first deer last October, so I'm gonna get my elk this October."

She was diagnosed with cancer when she was only nine years old.

"And then I relapsed, and I had to travel to Seattle for a bone marrow transplant."

"Like, with the type of cancer I had, it's like, you can't jump on a trampoline, like slow down when you're running, all this like stuff 'cause I had very fragile bones I still kind of do," said Johnson.

But today, she said none of her painful past was on her mind.

"So this is like something that I can do, that I enjoy doing," said Johnson.

McGann said giving children this is what drives him to keep the camp going. The camp is now in its eighteenth year.

Scooter's Youth Hunting Camp is a 501c3 and McGann says all donations benefit the kids. To learn more about how you can help, click here.