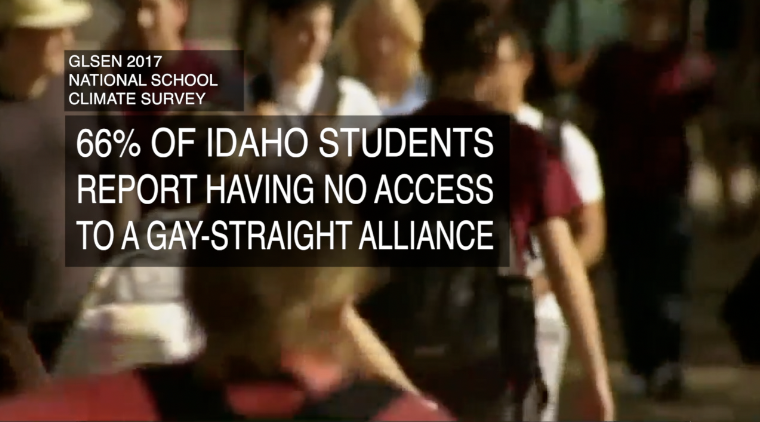 BOISE, Idaho — According to the National Alliance on Mental Illness, LGBTQ+ people are at a higher risk than the general population for suicidal thoughts and suicide attempts, and experts tell us, in Idaho, those rates are especially high among LGBTQ+ youth.

"It was very clear what needed to happen to remain alive and healthy," said Jess Cziapewski, trans woman from Idaho.

Cziapewski’s journey is similar to too many others' in Idaho who are growing up LGBTQ+.

"Being different, I spent pretty much my entire life feeling like I was alone," Cziapewski.

For the 23-year-old from Middleton, that journey meant eventually coming out as a transgender woman.

"I've always known that I was different... I never asked to be this way. I tried my entire life not to be this way, and I couldn't do it anymore," said Cziapewski.

And Cziapewski’s journey fits the statistics: "I've actually had several suicide attempts over the course of my life," said Cziapewski.

“So they might be victims of bullying, right?” said Alana Brunner, LCWC, St. Luke's.

71% of LGBTQ+ students in Idaho report having been harassed or assaulted in the past year based on sexual orientation, and 60% for gender expression, according to a 2017 GLSEN National School Climate Survey.

“We know that they have decreased school belonging, they have higher rates of depression, higher-rates of substance use..." said Brunner.

She said since youth spend so much time in schools, school administrators and staff have a unique opportunity to ensure the safety of their LGBTQ+ students. She suggests they consider implementing gender neutral bathrooms, inclusive curriculums, or even something as simple as a sticker in classrooms.

“With our current political climate, it’s really important to offer a space that’s open to anybody.”

One way of creating safety among youth? Gay-straight Alliances or GSAs. They are student-led, school-based clubs often advocating for acceptance and open to all members of the student body regardless of sexual or gender orientation.

“Schools with GSAs have higher educational outcomes, they have students with an increased self-esteem and sense of belonging.”

“Please go and ask for this resource— reach out for help because there are a lot of people there to support you," said Brunner.

Yet two-thirds of Idaho students surveyed said their school doesn’t have a GSA or something similar. Of those surveyed, 21% of LGBTQ+ students say they were "unable" to form a GSA.
Cziapewski says her high school didn’t have one. But if they had, she says:

“Anybody that was different that I could have talked to? It would have been a game changer," Cziapewski said.

And as similar as Cziapewski’s journey is to those others growing up LGBTQ+ in Idaho, Cziapewski's journey is not one about suicide-- it's about resilience.

“We just want to not have issues when we go to the grocery store, ya know? Not be looked down on our judged... I deserve to be happy. And I deserve to have a good life.”

Resources aimed at helping LGBTQ+ youth include the Trevor Project, who also hosts a 24/7 crisis line, and GLSEN, which provides tools for teachers and administrators for helping to create safe spaces.

"We hold monthly activities on the second Saturday of every month. We have an active Facebook group where we post all of our activity information, but it's a secret group to preserve the privacy of our youth. You can direct anyone to our main Facebook page and have them message us there, and we can get them added to the private group from there!" said Jones.

For about two years now, 6 On Your Side has been closely following stories involving mental health and substance use in our "Finding Hope" series. If you or someone you know is feeling hopeless or suicidal, do not hesitate to reach out to the Idaho Suicide Prevention Hotline at (208) 398-4357.