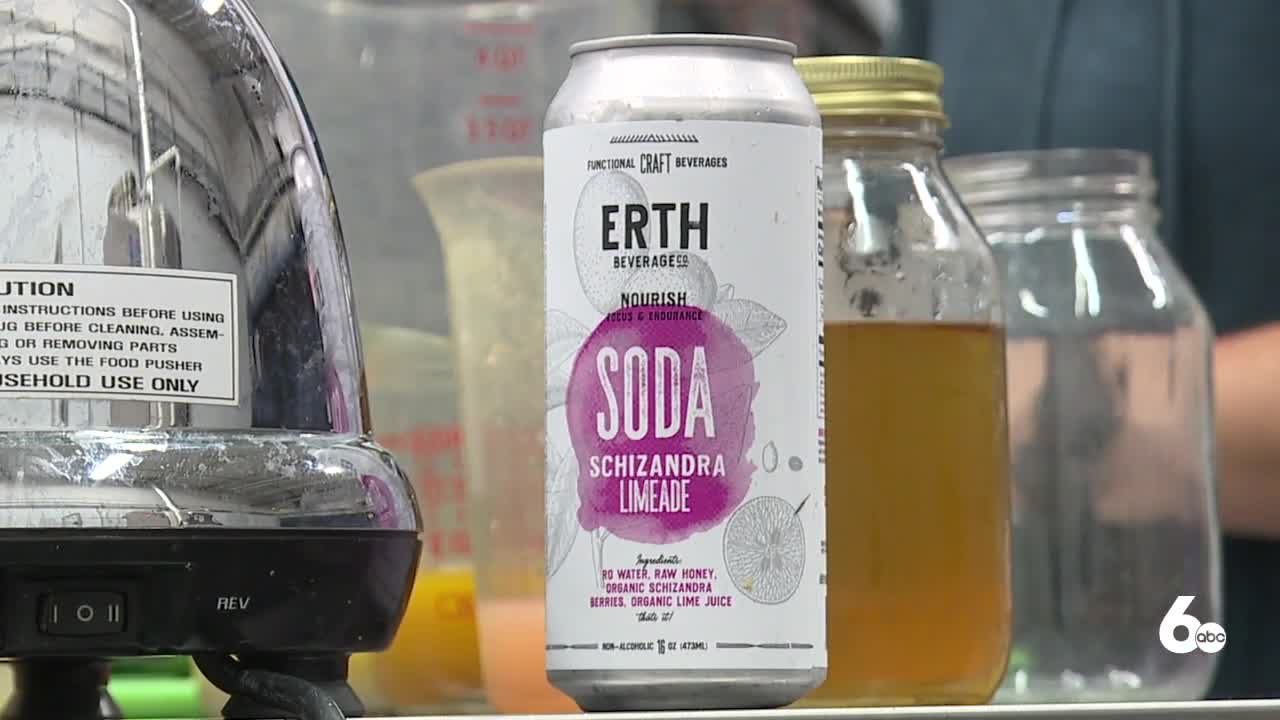 Made in Idaho: Erth Beverage Co

GARDEN CITY, Idaho -- When it comes to sodas and other bubbly beverages, most of the products on store shelves today are filled with sugar or fake sweeteners that leave many of us with a bad taste in our mouths. But Erth Beverage Company, based in Garden City, is taking the unsavory side of soda and turning it into a drink you can actually feel good about.

The business was created by husband-and-wife duo Eric and Sam Herrera. "Sam has a background in nutrition and herbalism," Eric tells Idaho News 6, "and I...actually have a background in beer brewing." So a couple of years ago, the Treasure Valley couple decided to merge those career interests into a brand-new beverage line. "We came together with this new idea to brew something that was non-alcoholic and that had some health benefits."

One of Erth's signature beverages is a centuries-old, long-forgotten drink called a "switchel." Eric explains, "A switchel was an apple cider vinegar drink that was originally drank in New England 1800s era. We took that recipe that was old, typically using sorghum or molasses, and we brought it to 2020."

No sorghum in these switchels, though - instead, you'll find sweeteners and vinegar sourced from right here in the Gem State, including Idaho honey and organic apple cider vinegar from Fruitland. Those local organic ingredients are added into the switchel raw, after the brewing process, to keep their health benefits intact. Why? "We want to maintain the rawness where you have those enzymes and those minerals, the naturally occurring bacteria that exist in the honey and the vinegar," says Eric.

Sam says switchels provide excellent electrolyte replacement after exercise. Another added benefit, she laughs, is that "...it's a great hangover remedy too."

Along with the switchels, Erth also crafts botanical sodas that sport Sam's signature healthy twist. "I pick a plant that I'm really excited about and then I build a functional but approachable drink around it. Like right now we have a limeade that features a Chinese plant called schizandra and then we have a ginger beer that has elderflowers in it."

At first, the Herreras were only selling Erth products at farmers markets, but now they're in over a dozen local stores and sell nationwide on their website, success they credit to the friendly business community here in the Treasure Valley, "I think we've gotten into a lot of stores because of recommendations from other business owners," says Sam. And also, just as importantly, "we're stoked about our product and that makes other people excited too."

Erth can ship their drinks to anyone in the US via their website, but if you live in the Treasure Valley, they do local door-step deliveries to much of the Boise area on Thursdays. You can also find Erth sodas and switchels in over a dozen local stores and tasting rooms.

For a complete list of where to find them and to check out all of their medicinally-minded products, visit their website here.