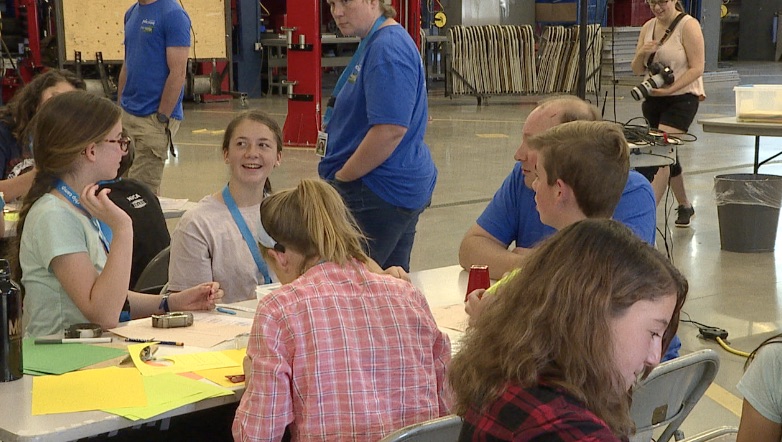 A free STEM camp in Boise hopes to inspire careers in technology and engineering fields. One man says he owes his career to what camp provided him.

BOISE, Idaho — A STEM Action Center representative recently painted a dire picture for Idaho's economy when she said-- based on current graduation rates in our state-- the number of unfulfilled STEM jobs could multiply by five by 2024. But one local group, the Micron Foundation, is working to lower that number.

Handmade rockets aren't the only things lighting up at Micron's Chip Camp.

"There's a moment where the kids just light up. And I had that," said Braden King, volunteer at Chip Camp.

King made robots tick and rockets launch at the free day camp when he was in middle school.

"It's a brain child, you've created it, it came from nothing, you built in the software, it got made, came back and put it together, and it works," said King.

He's now in his ninth year volunteering as a counselor.

"It's pretty cool to kind of come full-circle," said King.

But it's not just Chip Camp he circled back to. He attended the Materials Science School at Boise State. Then...

"After I graduated they just offered me the position as a designer," said King.

He says he's now working in a STEM career he loves.

"I can use what I enjoy and just create something with my brain," said King.

And-- as in King's case-- engaging Idaho's STEM enthusiasts at this age, Ammirati says, is imperative.

"Studies show 4th grade and 8th grade is when STEM studies drop off," said Ammirati. "Ya know they build a rocket, like, 'That was fun!' They program a robot, 'That wasn't that hard! That wasn't scary!' They might choose to enroll in those classes in high school."

And when something they made works, King says that light in the kids eyes-- is something he can still relate to.

"I still get it and that's why I chose mechanical engineering is, because, I get to do that-- just get to do it for a living," said King.

This is the nineteenth year of Chip Camp, meaning next year will be their twentieth anniversary. To learn more, visit their website.