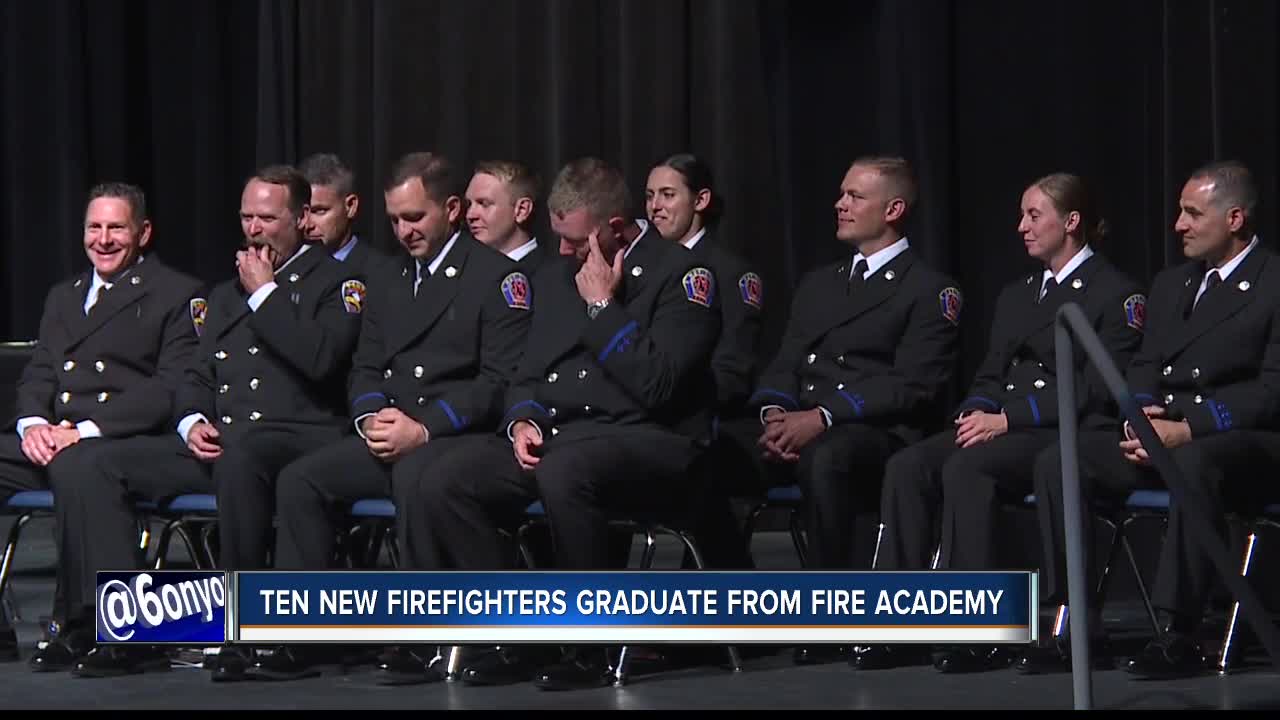 MERIDIAN — Diversity among Treasure Valley firefighters got a big boost from this recent graduation season. The fifth Treasure Valley Joint Fire Academy graduating class consisted of the first females to graduate the program, but also new firefighters who prove age is just a number, and it's never too late to follow your dreams.

"Today is huge. It's, for my family, it's hard to put in words," said new Eagle Firefighter, Tyler Bakken. It wasn't easy for him to get to where he is today, "My journey started in 2006, Cascade Rural Fire District, we were building houses up there, custom homes, and I started, wanted to help out the community, so I started volunteering with the fire department up there," said Bakken.

His journey eventually brought him to the Eagle Fire Department, where he began volunteering in 2009, trying all along the way to pass the test and become a firefighter. "Either didn't have a high enough test score or didn't make the interview," said Bakken.

Forty-five-year-old Tyler stands tall and proud to receive his badge today, and he isn't the only one graduating after experience down other career paths.

Sean Field is a 50-year-old who served in the military, then became a paramedic, and just last year, decided his dream was to become a firefighter.

"Your body gets beat down and recovery is a little bit longer than the younger guys," said Field. But that doesn't stop him, Field’s advice is, "If you really wanna do it, go for it. Don't stop, don't quit," today he took the oath as a Nampa Firefighter.

And the diversity in background doesn't stop there. Two of these academy graduates are females, representing the first women to graduate from the Treasure Valley Joint Fire Academy in the five years its been running.

"I grew up thinking I wanted to be a doctor, and then worked my way with the BLM through college and realized, oh, I can't be, I can't be in an office all day," said new Meridian Firefighter, Jill Rausch.

After spending time down in Malad fighting wildfires, she adjusted her path a little. Rausch said, "I figured structure fire is just a great mix between medical and fire."

These three firefighters are among ten total graduates. They hit the ground running, some of them as soon as this weekend, as they begin their career in fighting fire.

The Treasure Valley Joint Fire Academy is a 14-week training, and it is a collaboration between Meridian, Eagle, Nampa, Caldwell, Star, Kuna, and Middleton Fire Departments.

The ten graduates from Friday will join the Meridian, Eagle, and Nampa Fire Departments.