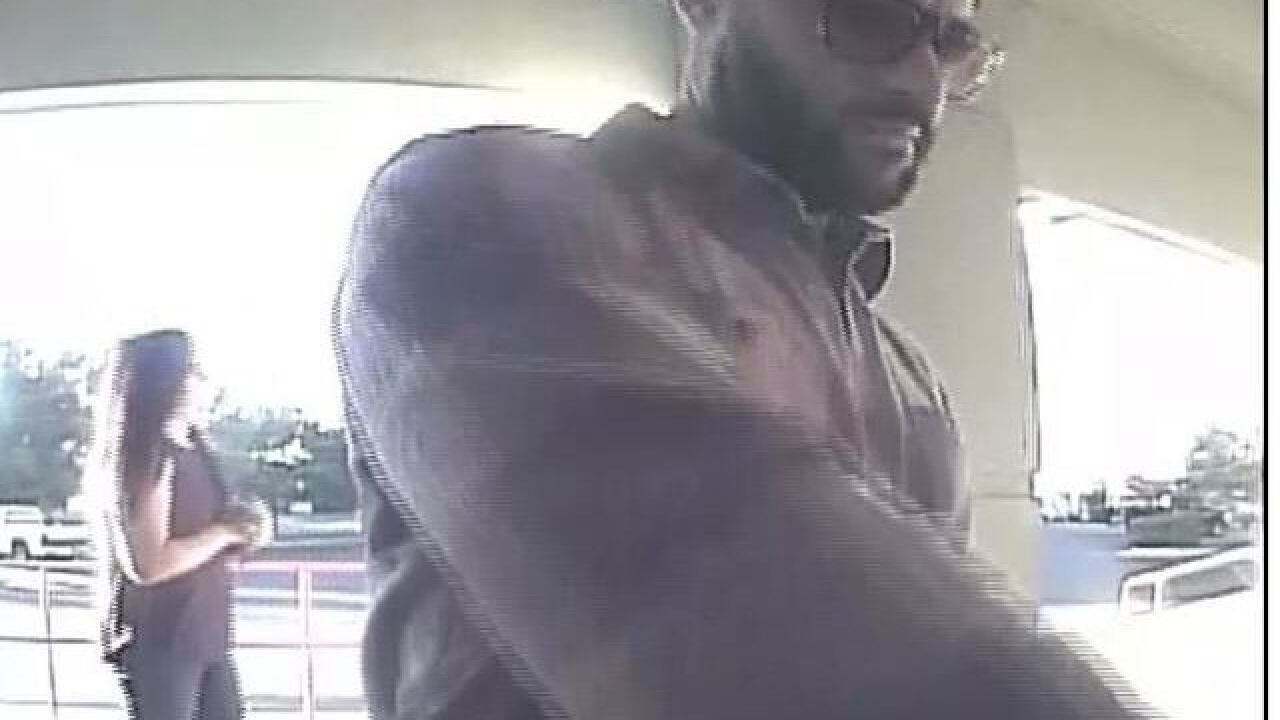 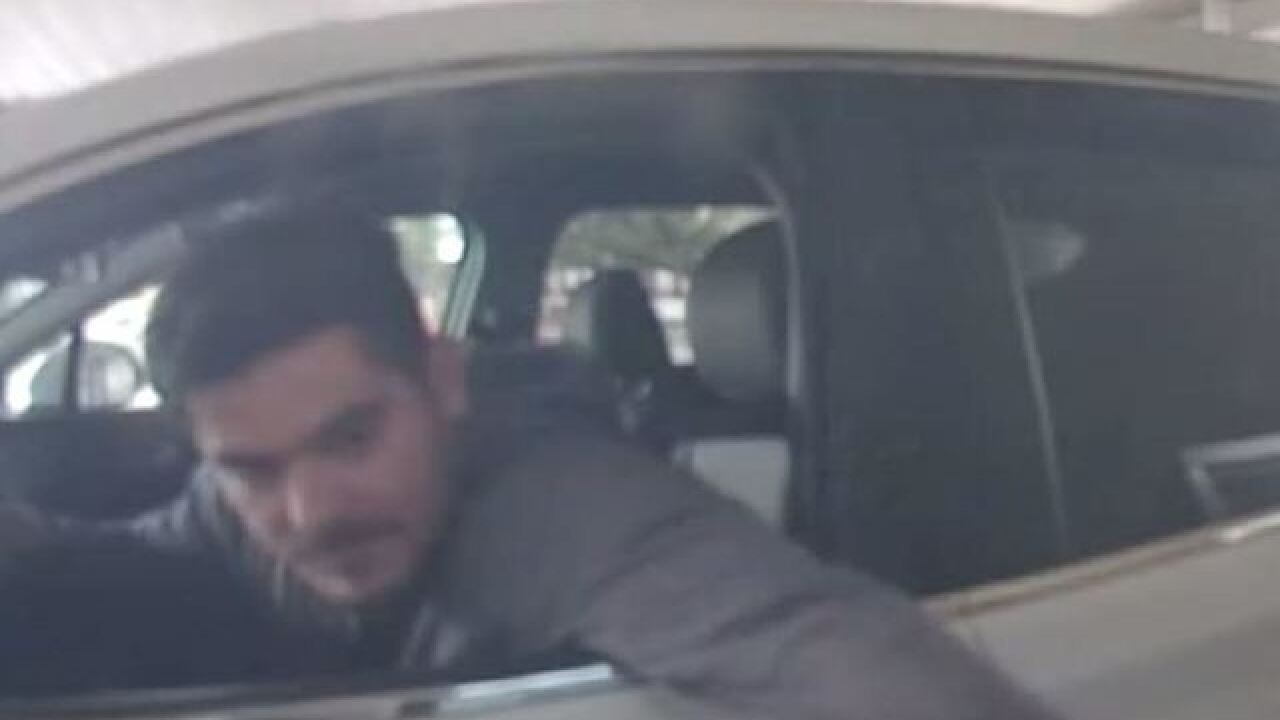 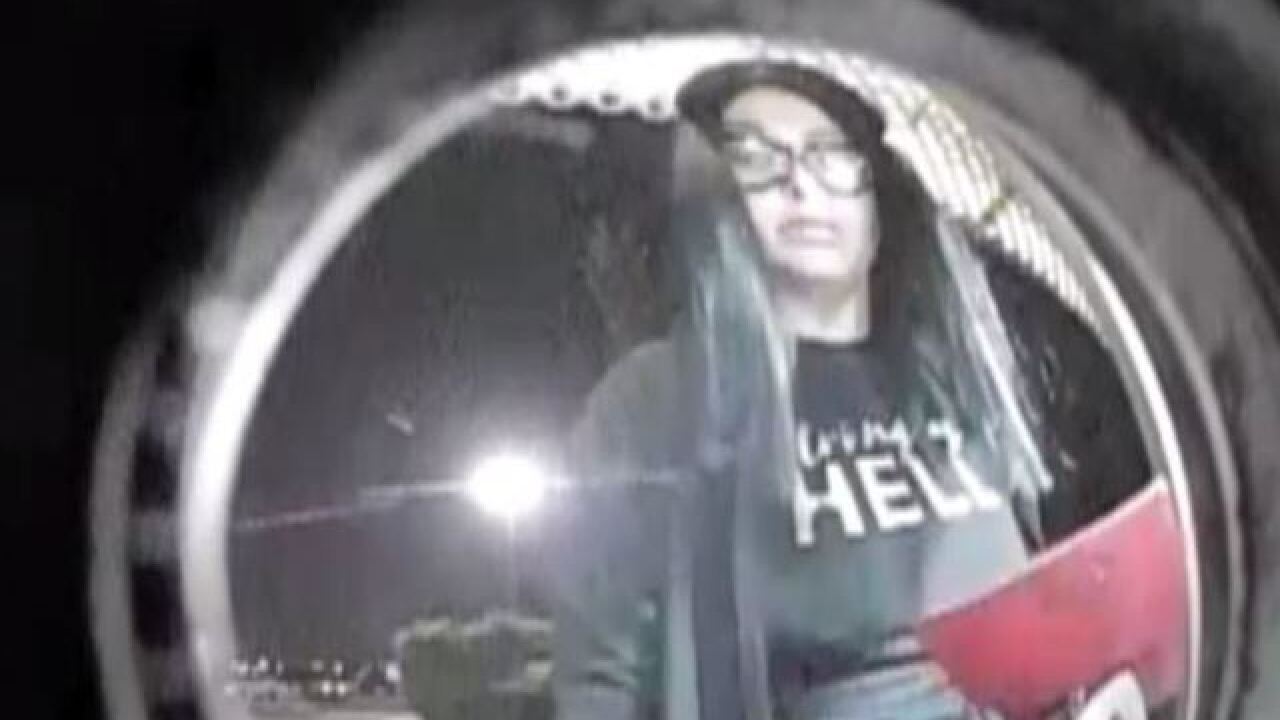 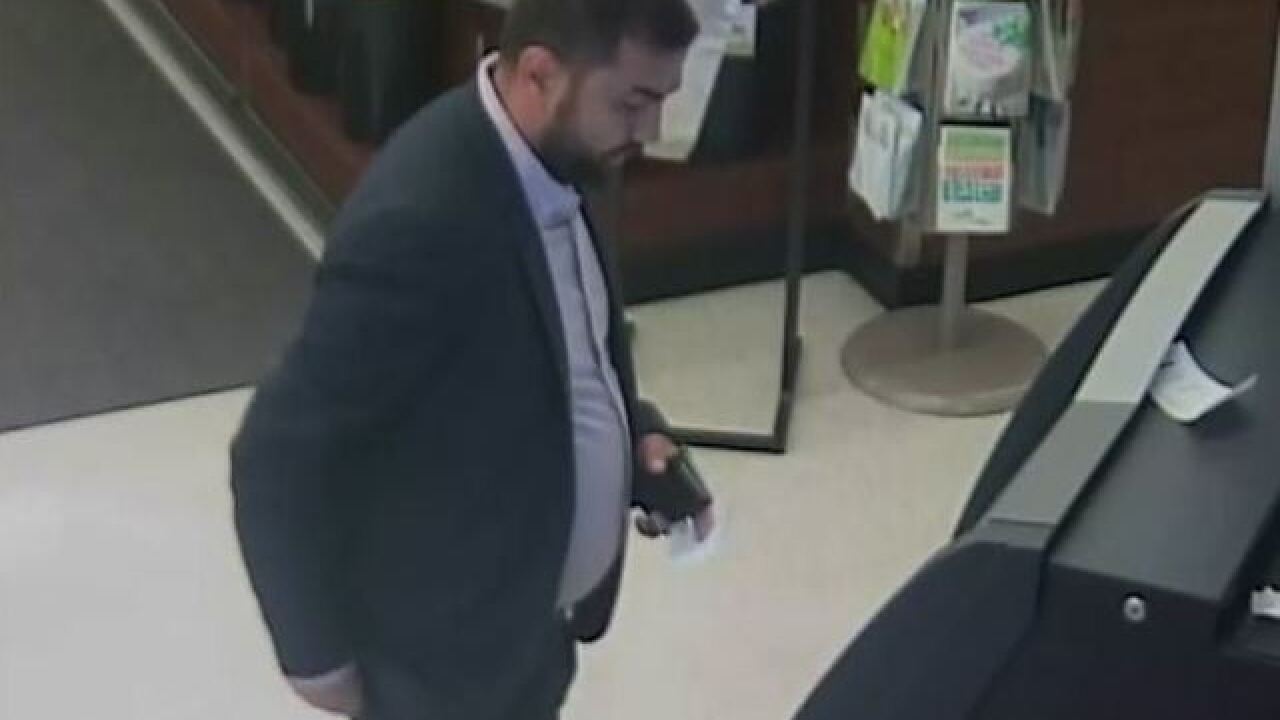 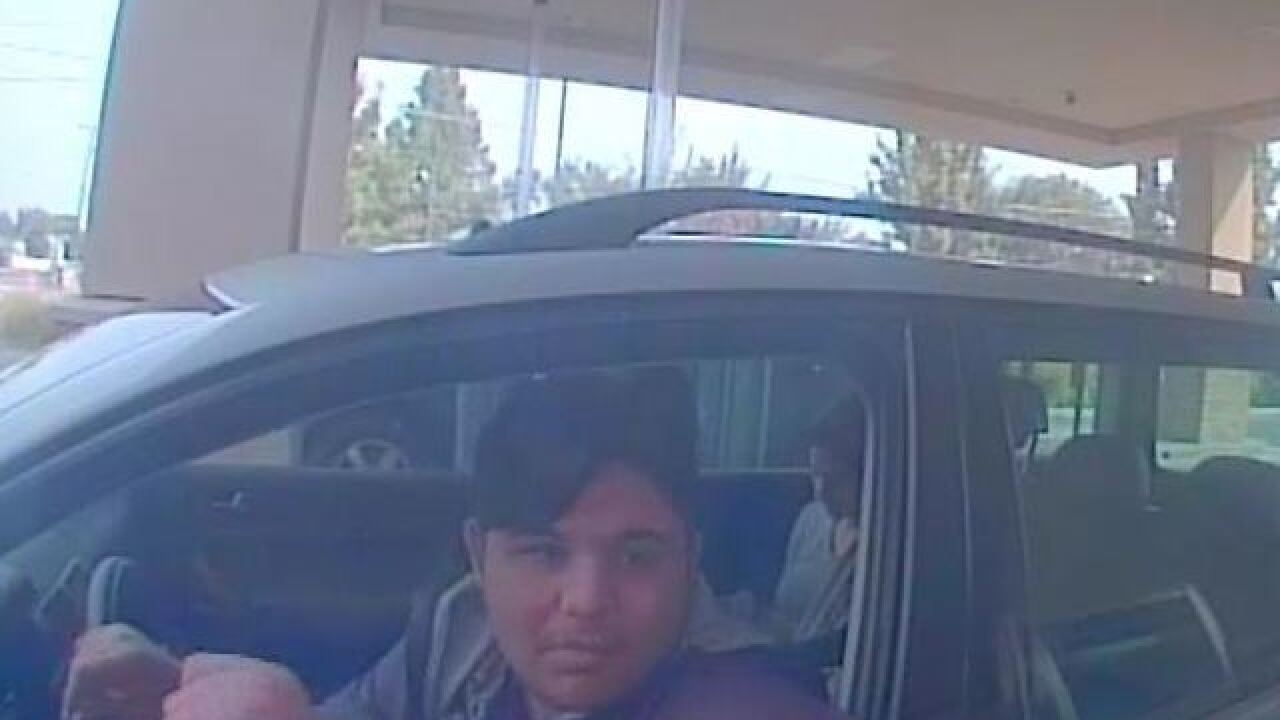 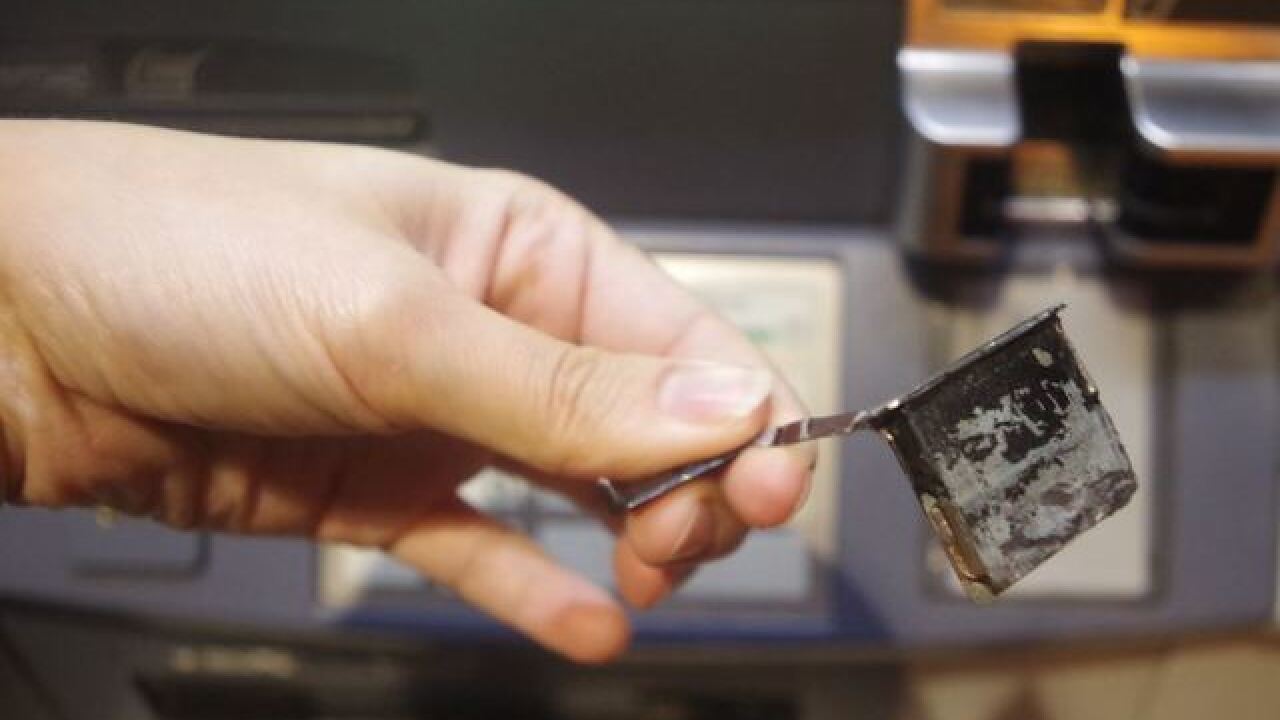 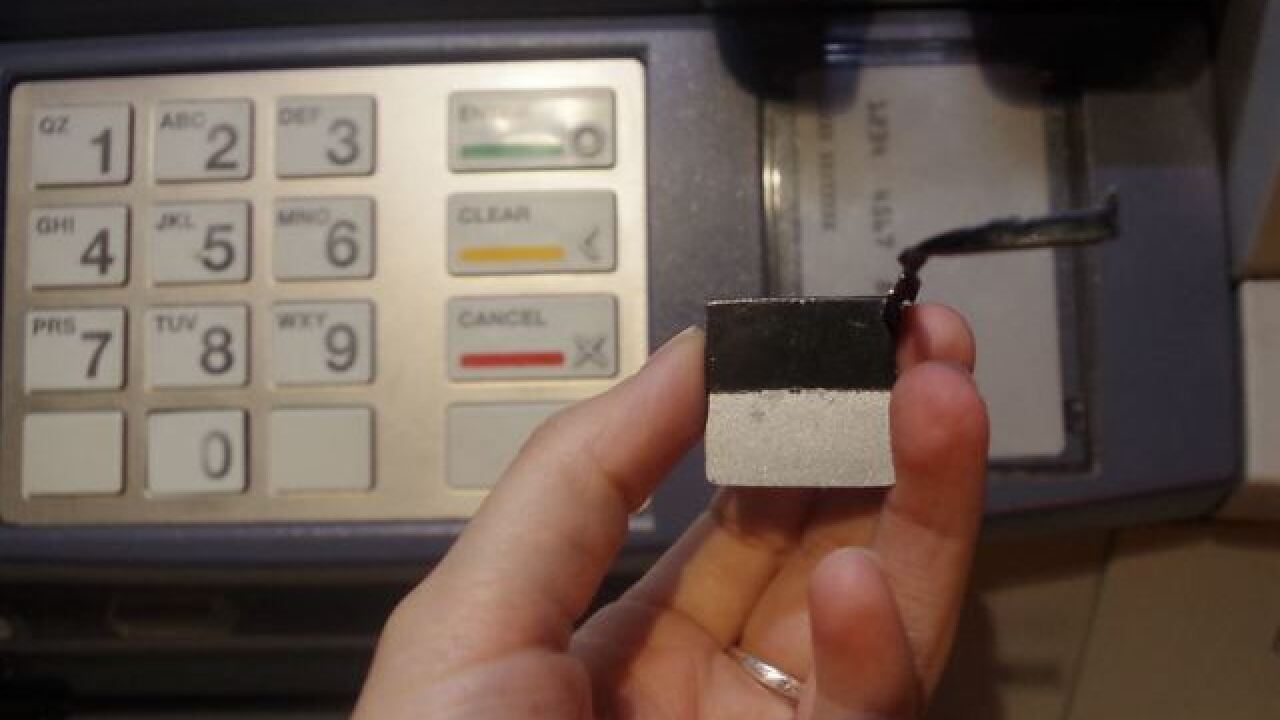 Boise Police Department investigators have been receiving information for the last month about card skimming devices showing up on local ATM machines around Boise.

“BPD has reason to believe the suspect or suspects have more than one skimmer that they are moving around to different ATM machines,” according to a Boise Police news release.

“(We) have heard from over a dozen victims whose financial information has been compromised due to a card skimmer. Thieves have the technology to hide skimmers in plain sight and the card user is none the wiser," said Boise Police Sgt. John Terry. "The only way a citizen will know they've been victimized is to see a charge they didn't make on the statement from their bank or financial institution."

On September 17, one customer actually had the card skimmer fall off the ATM while they were using it, reports say. Boise Police took custody of the skimmer and it was booked as evidence.

In another case, surveillance video showed a suspect installing, then later removing a card skimmer -- likely taking it to another location.

The thieves are using the stolen debit or credit card information to make new cards and are then using those new cards at businesses and financial institutions around town, police said. Surveillance cameras captured images of the suspects using those stolen cards.

A credit card skimmer is a device designed to steal your financial data when you’re accessing it either at a point of sale, such as at a gas station pump, or an ATM machine.

When you insert your debit or credit card into a cash machine, for example, a reader on the inside of the machine interprets the information on your card’s magnetic strip and that, coupled with the PIN you type into the keypad, gives you access to the money in your bank accounts.

“If you put your card into a machine that has a skimmer device on it, the skimmer also has a reader in it that records the information on your card’s magnetic strip. A second element of a skimmer is able to record your PIN, thus giving the criminal access to funds in that account,” the BPD release explained.

In the most recent cases, thieves placed very small skimmers on ATM machines. That means consumers using the machines would likely never notice the device -- and would only find out they've been victimized by checking their financial statements or being alerted by their financial institution of suspicious charges.

Officers advise credit and debit card users to carefully inspect transaction statements and report any fraudulent charges to their financial institution and to local police.

Law enforcement agencies work closely with the U.S. Secret Service to track and investigate these types of crimes--  since they often cross local jurisdictional, state or even international boundaries.

If you see a charge you know you didn't make, you should call your bank or financial institution and the local police department right away.

Officers are asking business owners and managers with electronic card readers to regularly and carefully check their equipment.  “The skimmers that have been found recently are very small and would not be easily noticed,” the release said.

Owners and managers are advised to take a good look at their equipment and look for anything that appears to be out of place or different.

Detectives believe the thieves are able to install the skimmers quickly, but must spend some time at the machine to dis-assemble it. Many of the suspects found responsible for these types of crimes are not local, but travel to different locations installing the skimmers -- then return some time later to retrieve them.

Anyone who sees suspicious activity near a gas pump or ATM should call 911 immediately.

Card users are being told to inspect the ATM, gas pump, or credit card reader before using it. Be suspicious if you see anything loose, crooked, or damaged, or if you notice scratches or adhesive/tape residue. You can wiggle the card insert location as well to make sure nothing comes apart.

- When entering your PIN, block the keypad with your other hand to prevent possible hidden cameras from recording your number.

- If possible, use an ATM at an inside location (where there’s less access for criminals to install skimmers).

- Be careful of ATMs in tourist areas, rural areas, or standalone ATMs, since they are a popular target of skimmers.

- If your card isn’t returned after the transaction or after hitting “cancel,” immediately contact the financial institution that issued the card.

-Look for suspicious vehicles near the ATM or for people hovering nearby, watching over the skimming device.