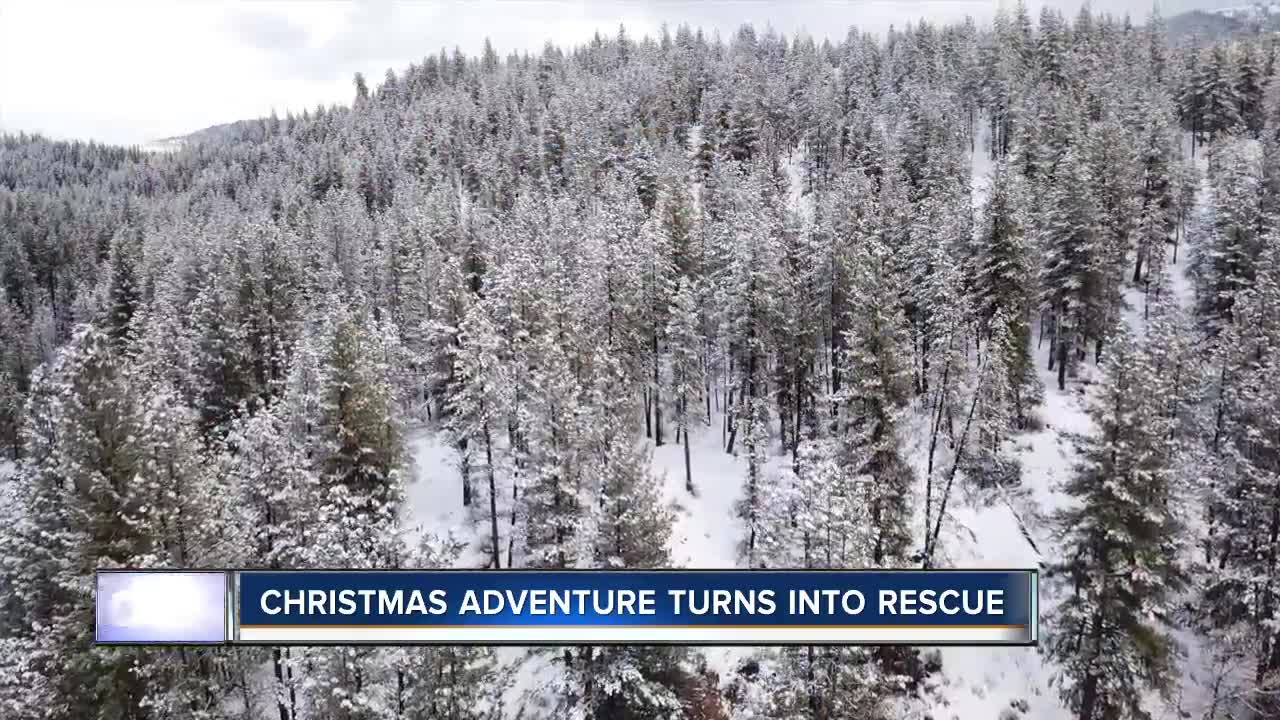 It's not unusual for Idaho families to make the trek up to Idaho City during Christmastime, and a lot can go wrong if you're not prepared well enough.

IDAHO CITY, Idaho — What started as a Christmas adventure for a local mom and her four children became a disaster, but ended in a string of events they'll never forget thanks to the help of four complete strangers.

Izabella Martinez and her children were happy to go hunting for their own tree, and as someone who grew up enjoying the Idaho outdoors, Martinez says she was prepared.

"I love the mountains, so we're always up there," Martinez said. "I had a shovel, ice melt, I've been in this situation so I'm fine."

As the sun began to sink, Martinez realized she and her four children were stuck without cell phone service.

"I had fishtailed on one of the corners, and I thought 'Ok it's going to start getting dark so we should work on the truck.' Trying to get something out six different times is a wear and tear on your body," Martinez said.

Back in the Treasure Valley, Martinez's mother and sister knew something was wrong after not hearing from her all day.

"It was about 8:30 when my mother called me and said 'Where is your sister?' and I didn't know," Kassie Mitchell, Martinez's sister said.

Mitchell and her mother immediately loaded up in the car and headed to Idaho City to search. They asked the owner of a local restaurant, called the Goldmine, to borrow his landline to call for help. Mitchell says when she called dispatchers, they told her they couldn't send out any rescue crews until dawn.

That's when a group of four volunteers stepped in.

"They said 'Stay here. We're going to find your family.'" Mitchell said. "I was pacing and my mother was randomly crying... They're all we have, and my mother kept saying 'We can't lose them all at once.'"

After hours of searching, the group of volunteers found Martinez and her children, around 5:00 a.m.

"They only had about half an hour of gas left," CJ Torgensen, one of the volunteer rescuers said. "It was eight below out there."

It was an emotional reunion.

"My oldest nephew started crying, my sister started crying, we all just embraced each other--didn't know who was where but it was like a big family blob," Mitchell said.

Martinez says the entire time she was waiting for help, she was never afraid--not even for a moment--because she made sure to tell several people where she was going and because she had faith in her family.

"There was no doubt in my mind that someone was going to come," Martinez said.

Her family says they'll be forever grateful to their Christmas heroes, but that's a title Torgensen wasn't expecting.

"We didn't go out because we wanted to be heroes," Torgensen said. "We went out because someone needed help. That's all there is to it."

When Martinez's family when up to get her truck, they ran into two other groups of people that were stranded on the same road. Luckily they were able to help dig them out.

If you're heading up into the mountains, make sure you tell multiple people where you're going, and pack your car with plenty of blankets, food, and water. Make sure you also have a shovel and other equipment you might need if you were to get stuck out there. A satellite phone can also come in handy if you do need to call for help.