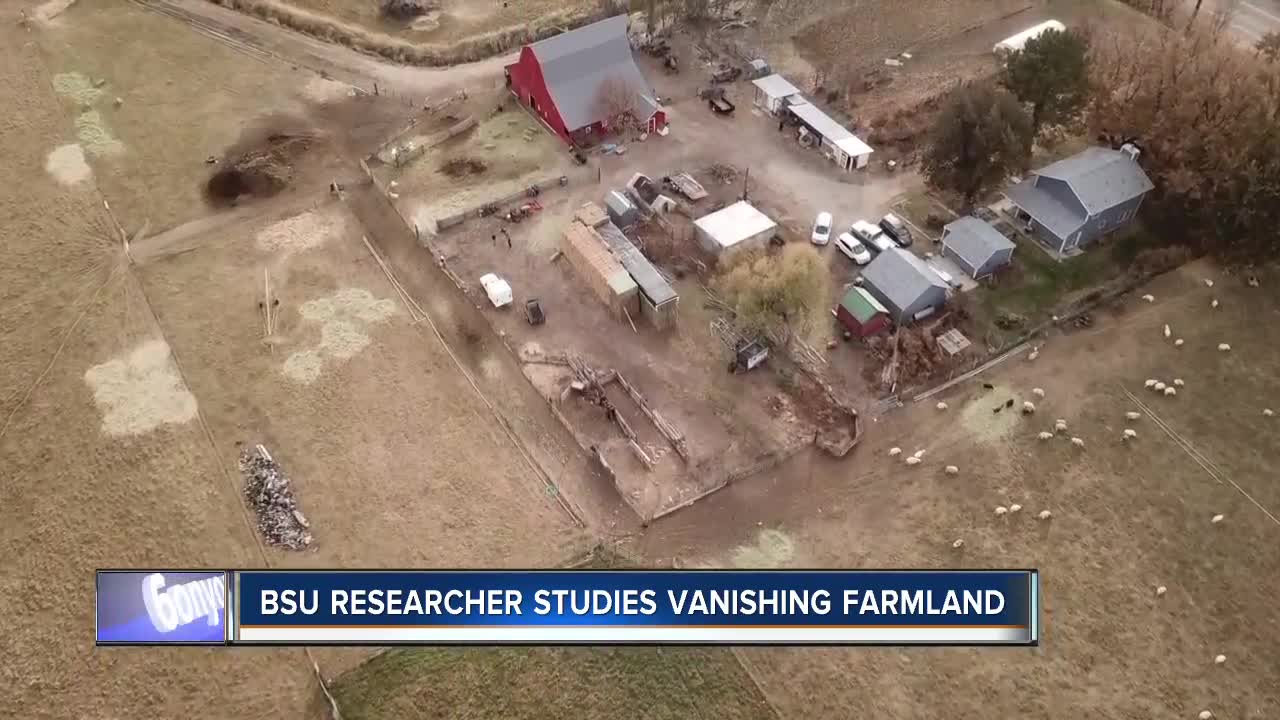 BOISE, Idaho — Farmland is disappearing across the Treasure Valley, we don’t need research to tell us that. But a study at Boise State is addressing the potential impacts of that loss.

Idaho’s population is one of the fastest growing in the nation, and much of the growth is happening in the Treasure Valley, which is paving over productive farmland. While the growth isn’t likely to stop, that Boise State research shows the key is in how we decide to grow.

“If we don’t make any changes at all, what we’re projecting is a 50 percent loss or losing half of our agricultural land in the Treasure Valley,” said Jodi Brandt, Assistant Professor in the Human Environment Systems Department at Boise State.

That loss could happen by the year 2100, and while many of us may not be around at that time, we’ve all got family members who will.

“The rate of farmland loss, even compared to everywhere in the nation is higher,” said Brandt.

“There’s particular areas in the valley which, just are so rich and unique and productive that we really wouldn’t want to pave over,” said Brandt, because once you do, you can’t go back.

So through grants from the National Science Foundation and the U.S. Department of Agriculture, Jodi Brandt is collaborating with several agencies from across the community to see not only what the urban footprint could look like over the next several years, but to also provide state leaders with advice on what to do about it.

“All the farming that can be done on the earth, is being done on the earth. Those places have been found. There’s no new frontier of farmlands,” said Janie Burns, owner of Meadow Lark Farm and Board Member of the Treasure Valley Food Coalition.

Janie runs a 10-acre farm in Nampa. Her part in this research is to educate the public on the impacts of vanishing farmland.

“Methods of preserving farmland so the farmers are compensated for the loss of their land, or have the ability to continue to farm, but have, achieve some economic security,” said Burns.

That land preservation is something the Land Trust of the Treasure Valley is working toward.

“We work with willing landowners to find opportunities for them to permanently protect their property,” said Eric Grace, Executive Director of the Land Trust of the Treasure Valley.

Using what is called a “conservation easement”, they work with landowners who will give or sell them development rights but continue operating their farmland.

They work to preserve the land even when the equity of selling land might be appealing.

With all that said, we know that halting growth completely isn’t an option, so what else can be done about all of this?

“We can think about how we want to grow, in terms of lot sizes or high density or low density houses,” said Brandt.

Brandt said it’s going to take an effort by local and state jurisdictions to tackle the problem of vanishing farmland.