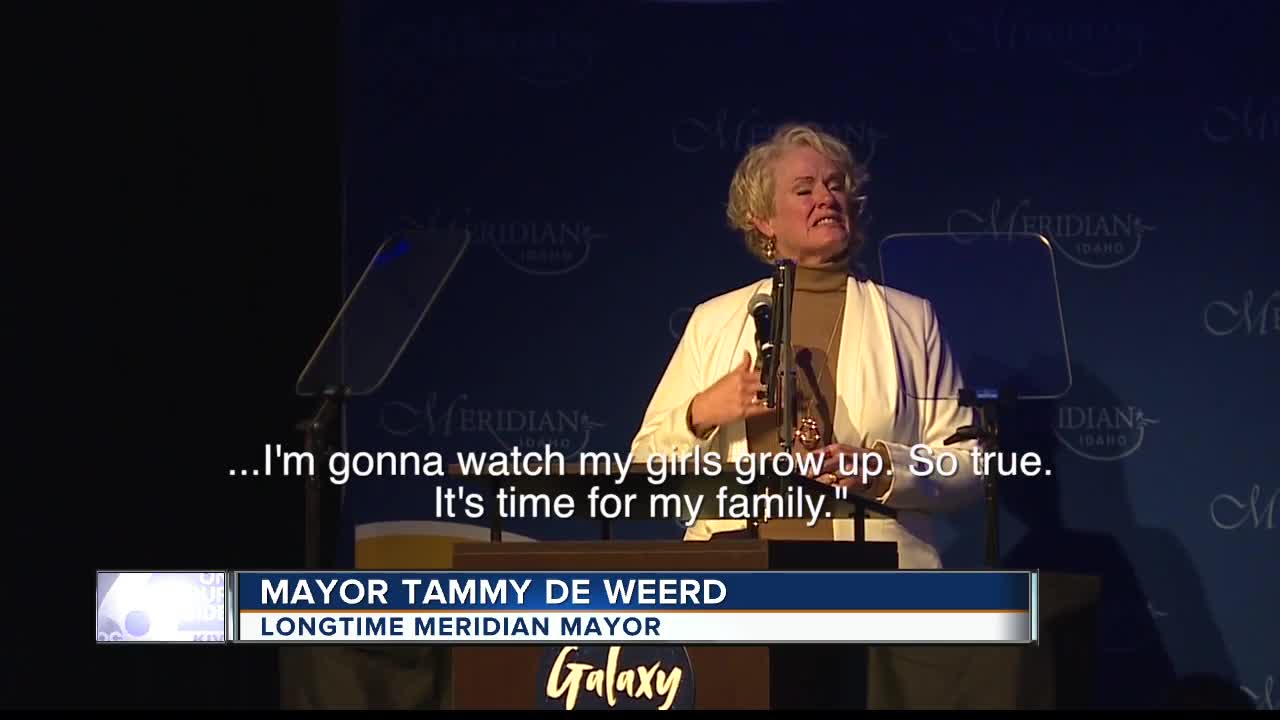 In her State of the City address Wednesday afternoon, longtime Meridian Mayor Tammy de Weerd told a packed audience at the Galaxy Event Center that, “This will be my last year as mayor.”

Shortly after Meridian Mayor Tammy de Weerd announced her decision to not run for re-election in November, others interested in the gig are now announcing their intentions to run.

I have been considering for some time working to have a greater, more positive impact in my community. With the announcement of the Mayor's decision, I am excited to throw my hat in the ring. #idpol

Robert Simison, Mayor de Weerd's current Chief of Staff, also plans to run, according to a source. We'll provide more details on his announcement as they come in.

This is the 16th State of the City Address for Meridian Mayor Tammy de Weerd. Now, a final curtain call to the theme of musical blockbuster, "The Greatest Showman."

"My 'what's next' is, as the greatest showman said in the final scene, I'm gonna watch my girls grow up. So true. It's time for my family," said Mayor de Weerd.

The mother of four says this decision is sparked by one reason in particular.

"And family is important, and I have a grandbaby on the way-- and I haven't been able to really get to know my other grandchildren like I'd like to."

But that's not the only priorities she's re-thinking. She now has ten months to get done what she hopes to achieve.

Some of these, she says, include roads and schools, preserving and further defining open space, and downtown development.

"I would like to see a couple of the projects that we've been working with realized in our downtown-- or at least starting."

Her Chief of Staff says these are the very projects that have kept Mayor de Weerd tethered to her duties all these years.

"You're always working, weekends, evenings, early mornings, so, it's time for her to enjoy her life," said Robert Simison, Chief of Staff, City of Meridian.

And while it's family she says she looks to spend more time with, she's optimistic about the other family she leaves behind.

"They will succeed without me."

In her State of the City address Wednesday afternoon, longtime Meridian Mayor Tammy de Weerd told a packed audience at the Galaxy Event Center that, “This will be my last year as mayor.”

She said she wanted to spend more time with her family and daughters.

De Weerd, a fourth-generation Idahoan, has served as the Mayor of Meridian since January, 2004. She has lived in Meridian and has been an active volunteer in the community for more than two decades, serving the citizens of Meridian in an array of voluntary and elected capacities, according to the City of Meridian’s website.

“The State of Meridian is strong. We are debt free. We have one of the lowest tax levies for full service cities. We are among the top safest cities in Idaho. We continue to rate among the best places to live,” she said.

A big focus for city officials this year is the completion of the Comprehensive Plan update. Mayor Tammy says the update is needed years ahead of schedule, due to Meridian’s significant changes. The City is currently wrapping up round table discussions focused on economic development, transportation, and housing.

The Mayor pointed to citizen feedback in the importance of preserving open space as planning for the City moves forward and decisions are made by the Meridian City Council regarding development. “People want less density, while desiring farm land preservation. Environmentally responsible and sustainable growth requires density. I’m committed to leading the discussion to address these competing needs,” she said.

One new open space coming soon to Meridian is Discovery Park. The first phase is 27 acres of the eventual 77 acres planned and is set to open this summer. Plans for the park include sand and water play, dual zip lines, a climbing wall that is a map of Idaho, softball fields, an off-leash dog area and more.

“There are transformations on the horizon for the heart of our community -- our downtown will see a major project begin this spring,” said the mayor, outlining plans for two, four-story buildings that will house residential, retail and office space on the square block across from Meridian City Hall.

At the end of her speech, Mayor Tammy announced that she would not seek re-election this November. “I am grateful and humbled to have the privilege to serve you. I will be working hard until I turn this over to our next Mayor. There is work to be done.”