As the West burns, climate change has affected Idaho, too. ‘Expect more records to be broken’ 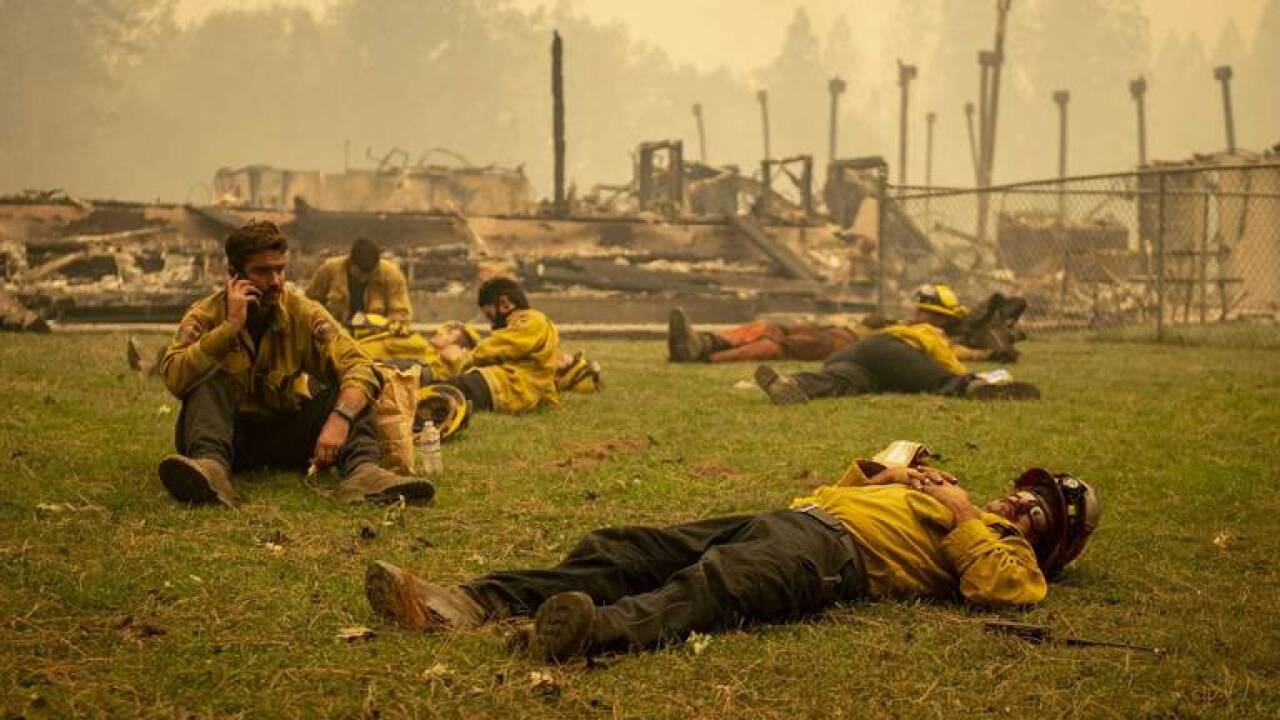 JASON PIERCE <i>JPIERCE@SACBEE.COM</i>
A Cal Fire crew takes a break in the grass next to Berry Creek Elementary School, which was destroyed overnight during the Bear Fire on Wednesday, Sept. 9, 2020. The crews only get a brief window to rest between hourslong shifts. The blaze, part of the larger North Complex burning in Northern California, exploded in size Tuesday night and into Wednesday, forcing evacuation warnings and orders for at least 20,000 people in Butte County and reportedly inflicting widespread damage on the foothill community of Berry Creek.

This article was originally written by Nicole Blanchard for the Idaho Statesman.

Idaho has been lucky again this summer.

Though a handful of mostly small wildfires are burning around the state, Idaho has had a relatively mild wildfire season for the second year in a row, a stark contrast to the fires now raging across the West.

This week, a group of climate scientists released a report warning that climate change is contributing to larger and larger wildfires, and the devastating blazes in California, Oregon and Washington show what Idaho could experience during its next big burn.

“Idaho dodged a bullet this year ... but we don’t have to go back too many years to see something similar to what’s going on in other states,” said John Abatzoglou, a climatologist at University of California - Merced. “It’s hard to not expect that Idaho’s time will come soon.”

Whether Idaho wildfires will prove to be as destructive and fatal as those in neighboring states remains to be seen, but experts say they’ll almost certainly burn more of our state than they have in years past.

For years, scientists have pointed to connections between climate change and the “megafire era” that began in the late 1980s in the Western U.S. So it comes as no surprise that a recent report from Climate Central, a nonprofit of scientists raising awareness about climate change data, again emphasized that average temperatures have increased in the region since 1980, while average acreage burned by wildfire has also grown.

Using data from the National Oceanic and Atmospheric Administration, Climate Central found that, on average, temperatures in the Western U.S. have increased about 2 degrees in the last 40 years.

Climate change can also influence precipitation. In many cases, lack of precipitation can lead to dry fuel loads that become tinderboxes for wildfire. But increased precipitation isn’t necessarily beneficial either.

“Often some of the worst fire seasons happen when you have a really wet spring, because you have a lot of underbrush growth,” said Russ Qualls, a climatologist at the University of Idaho, in a phone interview.

Qualls said it’s still not clear what impact rising temperatures might have on precipitation trends in the future. Scientists have noted in recent years that climate change is affecting global wind patterns, causing winds to speed up. Heavy winds over Labor Day weekend helped fan flames across the West.

“(The current wildfires) were facilitated by extremely strong winds, for the most part these downsloping winds moving down the Cascades, the Sierra Nevadas and into mountain communities,” Abatzoglou said.

All of those factors combine to create large wildfires that can be difficult to control and burn more area than they used to. Climate Central created charts using federal fire data that show Idaho experiences larger fires more frequently, and the average yearly acreage burned has grown in the past two decades despite the mild fire seasons we’ve seen recently.

“Every year we have a possibility of having a large fire season in Idaho,” Abatzoglou said. “It doesn’t always happen. These ingredients (like fuel loads and ignition) don’t always align.”

Idaho is regularly one of the states with the worst fires in the nation.

“Idaho is up there with California as the state in the lower 48 that has the most fire in general,” Abatzoglou said. “(It has) a lot of open space and complex topography, plus a good, long fire season.”

He said Idaho also has “a much lower fire return interval” than many states, meaning our landscape is prone to burning more regularly than some other environments.

According to Abatzoglou, part of Idaho’s exploding wildfire problem is that we got a little too good at putting fires out. That created an excess of fuel, even in places like Idaho’s forests, which are less inclined to burn than the Great Basin that stretches into Southern Idaho.

The combination of contributing wildfire factors has fallen in Idaho’s favor the last several seasons. The National Wildfire Coordinating Group has recorded just under 55,000 acres burned statewide in 2020, while the average annual burned acreage in the 2010s was about five times that at 278,000 acres.

Does that mean Idaho is due for another massive burn year? Abatzoglou said it’s not easy to predict, but we should err on the side of caution.

Part of the horror of the current wildfires in the West is the destruction they’ve inflicted, burning entire towns in Washington, Oregon and California while claiming multiple lives. Idaho has largely avoided similar catastrophes since the Big Burn of 1910 in North Idaho, which killed 86 people and burned much of the town of Wallace.

“It still stands as largest single fire (in Idaho history) even though temperatures were cooler,” said Qualls, the U of I climatologist. He said the devastation was likely due to a lack of resources and knowledge of fire science rather than environment.

Abatzoglou said part of the reason fires in California tend to destroy homes and kill people is because most of the state’s fires are human-caused.

In Idaho, about 31% of fires have been human-caused over the last 25 years, he said. Many of the rest have been caused by lightning strikes. They often occur in rural areas and have more room to burn without significant loss of life or property. Abatzoglou said Idaho’s smaller population certainly contributes to its wildfire makeup — which means the state’s fires could change as people continue to move here.

But even if Idaho wildfires aren’t burning entire towns, Abatzoglou said they’re certainly harmful to humans. In the massive bushfires that burned across Australia earlier this year, he said, more people were killed by smoke inhalation than by flames.

“We expect more years like we’re seeing, with fires burning for a long time and smoke impacting populations,” Abatzoglou said. “There’s not a great solution to smoke.”

Qualls said at some point, repeated megafires could start to burn themselves out by destroying future fuel loads. But Abatzoglou said invasive vegetation like cheatgrass seems to be preventing that.

“Fire is a negative feedback,” Abatzoglou said. “As a fire burns, it’s going to remove fuel. So that can reduce the potential for fire carrying into that landscape in subsequent years.

“The issue though is what we’re seeing in many parts of the West. Fires are burning in the footprint of fires that burned in recent years, even three or four years ago,” he added. “The idea that fires will basically chew up enough real estate to not have fire in the future is probably not going to work and is going to be particularly problematic in areas where we have invasive grasses come into a post-fire environment and colonized the area.”

Abatzoglou said a major solution is fighting fire with fire — specifically with prescribed burns and backburns that can act as natural fuel breaks.

Flames will never completely leave the West, nor should they, he said.

“We have to have fire on the landscape. Even though we’d like to have no fire, that’s not an option,” he said. “ We should have a little more fire that we can control and less that we can’t control.”