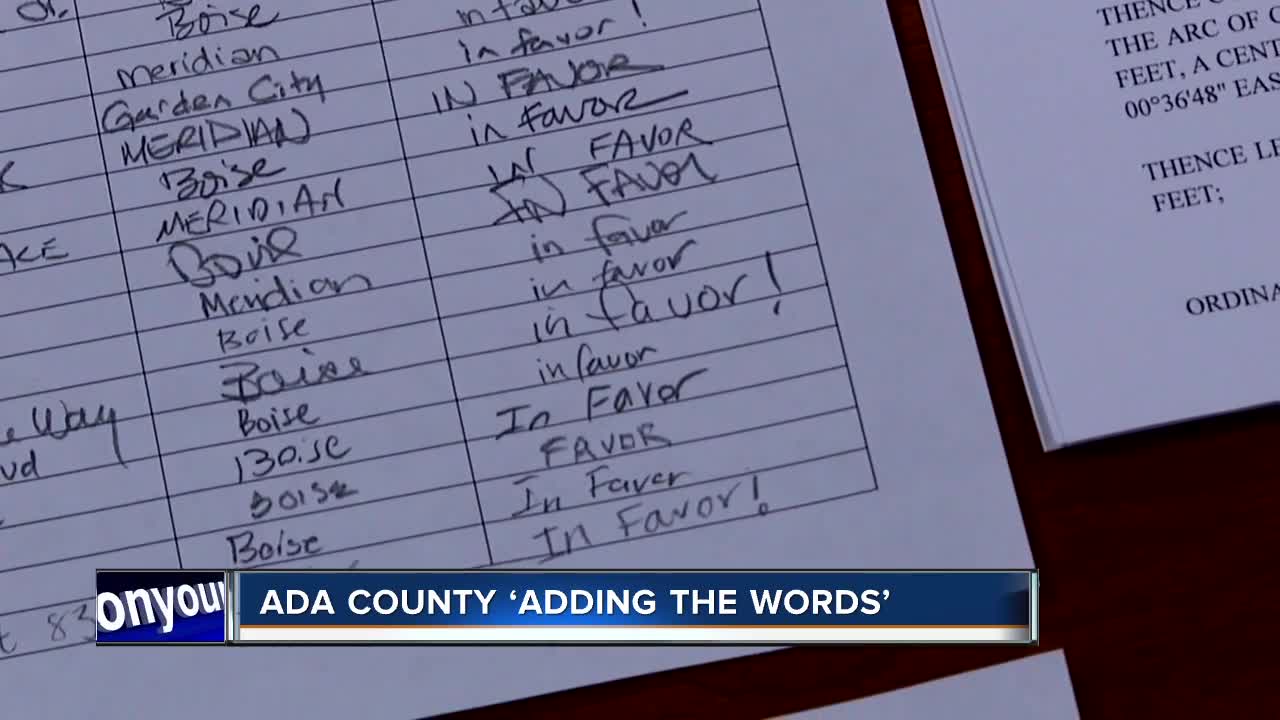 In the areas of housing, employment, and public accommodation, LGBTQ+ people can still be discriminated against without the option of recourse in many areas of Idaho. But as we've just now learned, Ada County Commissioners have unanimously voted to add these protections.

In the areas of housing, employment, and public accommodation, LGBTQ people can still be discriminated against without the option of recourse in many areas of Idaho. But as we've now learned, Ada County Commissioners have unanimously voted to add non-discriminatory protections -- applicable to all unincorporated areas of Ada County.

"Ada County has been and always will be a welcoming and safe place for all of our friends, neighbors, and loved ones regardless of their sexual orientation, gender identity, and gender expression," said Ada County Commission Chair Kendra Kenyon.

The ordinance prohibits discrimination based on sexual orientation, gender identity, and gender expression. About 30 people testified in favor of the ordinance. All three commissioners voted to adopt it.

"These are the kinds of ethics we teach our children and grandchildren and I am proud to be a part of an organization that supports these values," said Commissioner Rick Visser.

You may have heard of the Add the Words initiative, especially from the many advocates who have tried to get it passed at the state level for the last several years.

"We've been working for 14 years to see this enacted at the state level, yet that has still not happened," said Megan Carter, Vice Chair of Add the Words Idaho.

As a mother who identifies as queer, Carter said she personally has spotty protections in many areas of Idaho.

"Child care providers like day care, pediatricians -- all could certainly turn me away for my experience and my identity," said Carter.

But at a packed commissioners hearing Wednesday evening, Ada County Commissioners decided to take matters into their own hands.

Carter was among those who testified.

"All they have to do is perceive me to be a queer individual, and they would have the right to do that. If they were discriminating based on say my age or my religion, those things would not be permissible under the state human rights act, so I would have recourse."

As of our latest check, nobody had signed up to testify against adopting this ordinance, and on 8:30 p.m. Wednesday, Ada County became only the second county in Idaho to adopt the ordinance.

"This is who we are, and it is what makes Ada County such a great place to live and raise a family," said Ada County Commissioner Diana Lachiondo.

The non-discrimination ordinance applies to an estimated 60,000 people who live in unincorporated areas of Ada County. It's important to note, however, that this ordinance does not supersede city governments like Garden City, Kuna and Eagle -- cities who currently have not adopted a city ordinance for adding the words.

In addition, the newly adopted ordinance does not apply to religious corporations, associations, educational institutions or societies, or U.S. government agencies, departments, or the state of Idaho political subdivisions or agencies.

"Of course we're still going to ask that folks talk to their lawmakers about a hearing for Senate Bill 1226, Senator Maryanne Jordan's bill, which is for Add the Words. We'd like to see that heard."

In years past, those opposed to these added protections have argued that it would infringe on religious freedoms.

_____________________
Original Story:
As of this article's publishing time, at least 29 people have signed up to testify in favor of Ada County Ordinance 908 that would prohibit discrimination based on sexual orientation and gender identity.

The Board of Ada County Commissioners are considering the adoption of a county-wide ordinance that would prohibit discrimination based on gender identity/expression and sexual orientation in the areas of housing, employment, and public accommodations. Ada County Commissioners include Kenyon (Democratic party), Diana Lachiondo (Democratic party), and Rick Visser (Republican party).

If passed, the ordinance would implement non-discriminatory protections for the estimated 60,000 people who live in unincorporated areas of Ada County. It's important to note, however, that this ordinance would not supersede city governments like Garden City, Kuna and Eagle -- all Ada County cities who currently have not adopted a city-wide "add the words" non-discriminatory proclamation.

Wednesday's Commissioners hearing began at 6:00 p.m., but Ordinance 908 is listed as the sixth and last item on the agenda. The hearing is taking place in the Ada County Courthouse, in the first floor public hearing room.  

6 On Your Side's Madeline White will have this full story tonight at 10.