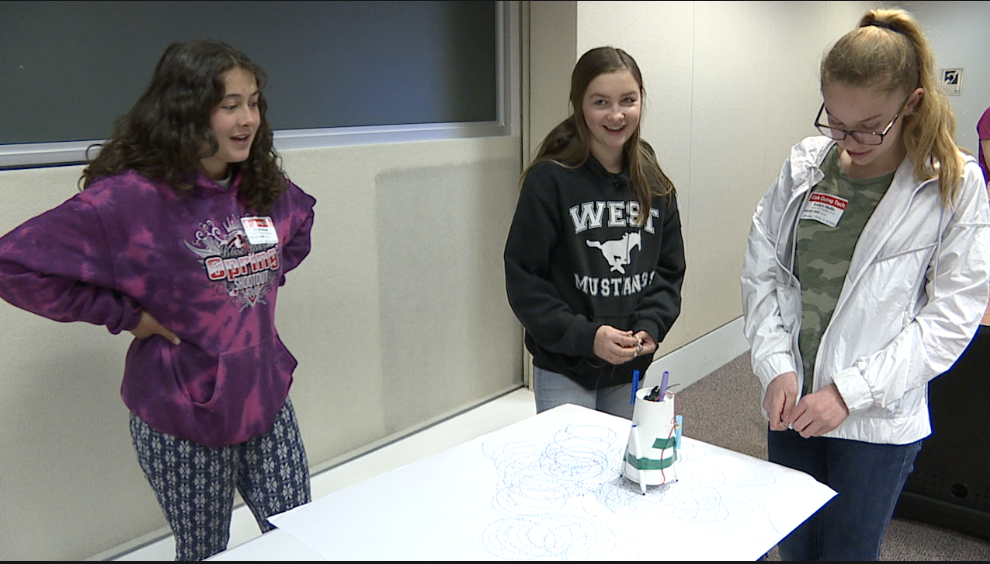 BOISE, Idaho — Due to the profession's lack of diversity, the Girls Going Tech program was spearheaded by the Micron Foundation to encourage interest in STEM careers by underrepresented groups.

"It was actually a lot easier because I wasn't afraid to talk to girls," said Sophia Newell, West Middle School student and program participant.

She said, for once, it was nice to not be the only female on an engineering team.

"Cause I didn't feel like anybody would judge me."

This-- is precisely the kind of empowerment program leaders hope to bring.

"We just hope that it may just spark an interest like, 'Oh maybe I could do this,'" said Cathy Ammirati, STEM Diversity Outreach Manager, Micron Foundation.

As a part of the STEM, science, engineering and AI learning program, 80 to 90 middle schoolers convened at Micron's Boise offices Tuesday.

"Companies have shown they have more success when they have a diverse workforce," said Ammirati. "Today we have a couple schools from far far east like past twin falls and we don't usually have that many, and having rural schools getting access, I think, is a key."

Micron representatives worked with local school counselors to identify eighth grade young women at their schools who they believe would be a good fit. From roughly 10 schools across southern Idaho, each candidate was hand-picked by their school counselor.

"I like taking stuff apart to see how it works," said Evelyn Hollis, middle school student and program participant.

"Then we can put it together and make it look nicer," said Newell.

Ammirati says the piqued interest-- at their age-- is critical to hang on to.

"Studies have shown that fourth grade and eighth grade is when girls lose interest in science, techonology, engineering, and math."

A recent U.S. Census Bureau report says, in Idaho, only 11 percent of engineers in the workforce are women. Ammirati says it isn't that they're uninterested or incapable. Rather-- "when it comes to underrepresented groups, maybe some minority groups, maybe they don't have the access."

But after the creation of Clifford, Sophia says she's got STEM in her sights.

Micron hosts the Girls Going Tech program three times a year and hopes to continue growing the program so that more young women in the treasure valley and beyond can receive this kind of exposure.